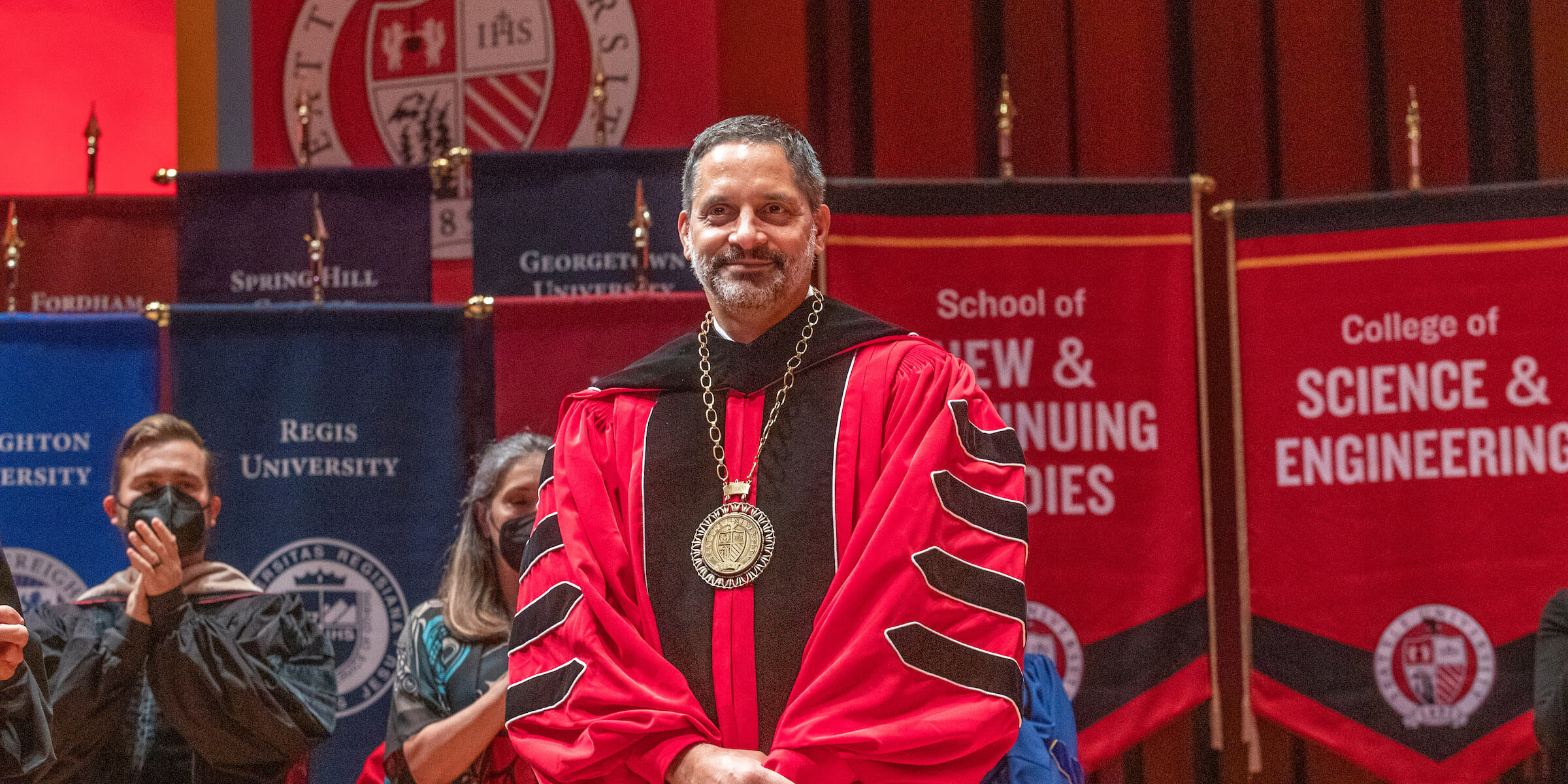 Confidently moving into our future and leading the way in shaping an ever-shifting world.

On Friday, September 24, Eduardo M. Peñalver was formally inaugurated and installed as Seattle University’s 22nd President at Benaroya Hall. This followed a special Inaugural Mass at St. James Cathedral on September 23, where members of the campus and community celebrated Seattle U’s new president with music and prayer.

“As Seattle University’s 22nd President, I am committed to stewarding our unique approach to the academic enterprise, ensuring that our bold ambition to become a university that is simultaneously innovative and progressive and Jesuit and Catholic" is realized, Peñalver said at his swearing in. “No matter what field of study our students have chosen, from political science to computer science, they need to understand data and technology, not just in their technical dimensions, but through a lens that includes their impact on human beings and on our communities.”

In his remarks, President Peñalver spoke of Seattle U's focus on innovation within a city that is a global hub of technology and progress. He also touched on topics around experiential learning within a progressive ecosystem that prepares students for a constantly changing world.

Joining faculty and staff at Benaroya Hall were members of the Board of Trustees, Board of Regents, Alumni Board of Governors, representatives from colleges and universities across the U.S., local civic leaders, the provincial of the Society of Jesus, the Catholic Archdiocese, alumni, donors and friends. The event began with an Academic Procession led by Professor Frank Shih, president of Academic Assembly.

“Today’s ceremony marks a new chapter in the life of the university and deepens our commitment to live out the mission of Seattle University,” said Provost Shane P. Martin.

Blessings and song from Indigenous elders and their families were an important part of the ceremony. Jill LaPointe, a member of the Nooksack Tribe and director of the Lushootseed Research Institute, spoke about her personal connection to Seattle U and the “beautiful and rich cultural legacy woven through all our Indigenous peoples.”

“SU has made a grand beginning to recognizing and honoring Indigenous people. The beautiful Vi taqʷšəblu Hilbert Hall stands as a tribute to all our ancestors who once lived right here on this land, welcoming each new student, from all walks of life, and bridging the wisdom of our past to endless possibilities for the future,” said LaPointe. “A future that will celebrate and embrace all human beings, rich or poor, black, red or white, young and old—a future that honors the dignity of all people.”

Beverly Anne Peters and her family of the Swinomish Indian Tribal Community performed the Coast Salish National Anthem, followed by an invocation from Natasha Martin, JD, vice president of Diversity and Inclusion.

In the proverbial passing of the baton, President Emeritus Stephen Sundborg, S.J., called President Peñalver “the new leader of a new era of Seattle University.”

In his remarks, Father Sundborg offered some sage advice, president to president: “Be who you are, nothing more, nothing less, nothing better. Let the university know you: know your thoughtfulness and what you think; know your faith and what you believe; know your leadership and what you most care about; … know your humanity, your warmth, your humor, your Northwest spirit, your love. … The job will shape you, it will change you, deepen and expand you, enrich and relax you, grow you. … And let yourself be known daily in prayer by God, as God works through you, blesses and guides you as president and as his beloved son of God who has been chosen to this great endeavor and is being inaugurated for it this joyous day.”

Nicole Piasecki, chair of the Board of Trustees, spoke of the inauguration as a marking of not only a new president but also as a celebration of an entire university, an affirmation of the mission and the igniting of possibilities for a bright future.

“Great leadership is absolutely critical to achieving the bright future we envision and strive toward. Seattle University’s strong foundation rests on 130 years of academic achievement, integrity, inclusion and leadership. Seattle U has been blessed with exceptional, strong and community-connected presidents,” Piasecki said. “Today, we continue that tradition while making history. Under President Peñalver’s bold leadership, we are poised to move into that future with confidence.”

“Like a Redhawk, you will soar Eduardo. The sky is literally the limit.”