Seattle U a Top 'Cool School' 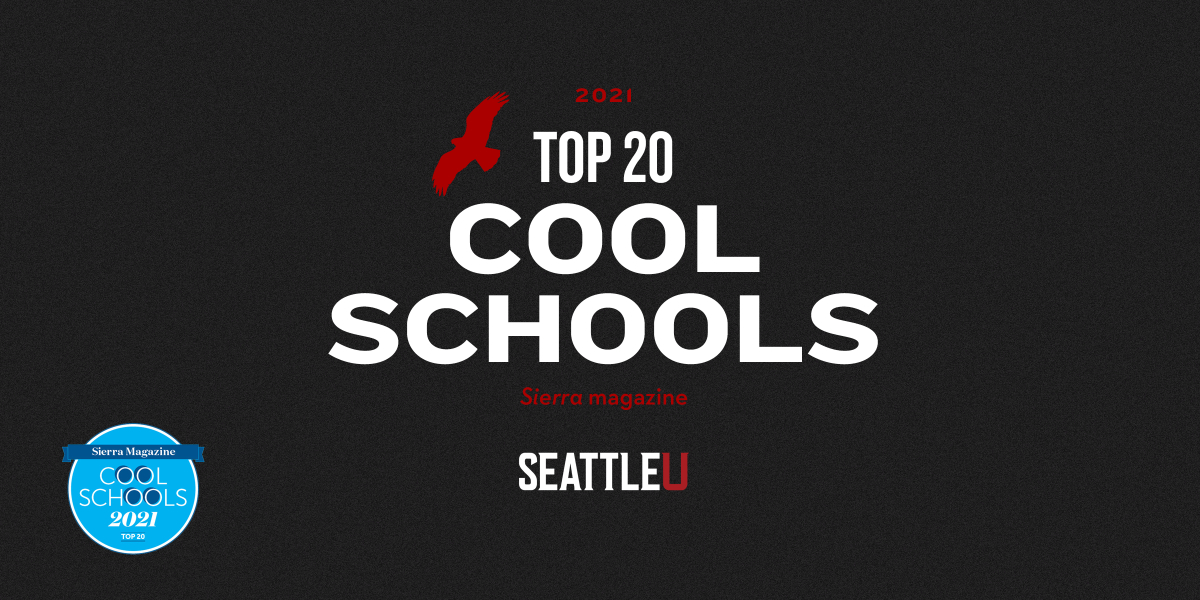 Recognition affirms our commitment to being a leading university for environmental sustainability.

Seattle University’s extensive efforts to promote, teach and practice sustainability was recognized in the 15th annual Sierra magazine Cool Schools 2021 rankings. The university advanced to #14 from #20 last year among 328 colleges and universities that participated in the Cool Schools survey, placing it in the Top 4 percent overall.

Seattle U is the only Pacific Northwest institution in the Top 20.

“Each of the schools ranked in the Top 20 have displayed a deep and thorough commitment to addressing climate change, protecting the natural world and encouraging environmental responsibility both through their campus operations and course curricula,” wrote Sierra in announcing this year’s rankings.

Sustainability is a core element of Seattle U’s mission, vision and strategic priorities as evidenced by a wide array of efforts.

In its summary of the university’s achievements Sierra notes, “By Earth Day 2022, Seattle University aims to become officially carbon-neutral for all scope 1 and 2 emissions, with help from heat recovery options, a fully electrified vehicle fleet, and offsets for approximately 3,300 metric GHG tons.”

“Seattle U is ahead of schedule on its 2018 vow to fully divest its endowment of fossil fuels over the next five years (and on track to become the first school in Washington State to do so),” notes Sierra. “It all adds up to an impressive six-spot leap since the 2020 rankings.”

Seattle U announced in September 2018 that it would divest the university’s $230 million endowment from fossil fuels within the next five years. In April 2020, the university reached its halfway point nine months ahead of schedule to divest its endowment portfolio of companies owning fossil fuel reserves by 50 percent by Dec. 31, 2020. The goal for full divestiture is June 30, 2023.

“It’s great to see us move up in the rankings this year after completing our latest STARS (Sustainability Tracking, Assessment & Rating System™) report back in March,” says Phil Thompson, PhD, professor of civil and environmental engineering and director of the Center for Environmental Justice and Sustainability. “It was truly a team effort that included our excellent academic offerings along with improvements in procurement, water efficiency and waste diversion among others.”

Sierra’s methodology used the STARS scores from the Association for the Advancement of Sustainability in Higher Education (AASHE) and then processed the STARS data through a custom-built formula that ranked the schools according to its own weighting criteria. This is based on Sierra Club priorities, which included a supplemental question about fossil fuel investments.

Seattle U began participating in the rigorous benchmarking STARS program in 2016 and out of the gate achieved a gold rating. The university also achieved gold ratings in 2018, 2019 and 2020.