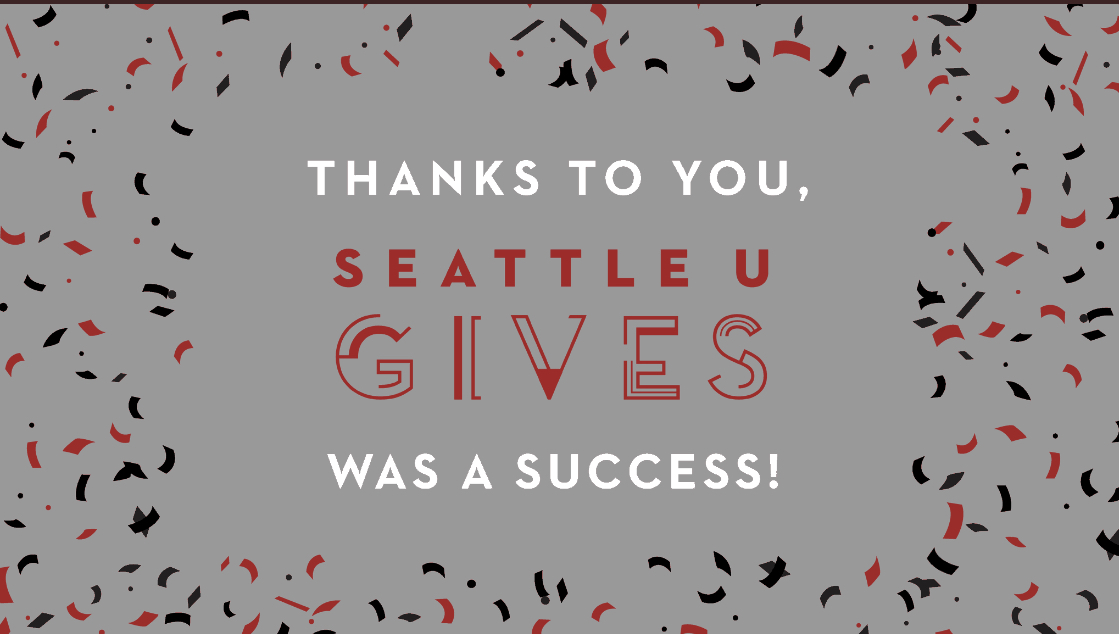 More than 3,500 gifts made in 24-hours to support students during Seattle U Gives.

“Seattle U Gives is different because it celebrates the power of many gifts making a large impact during a short period of time. Each gift—whether $5 or $500—has equal impact. We like to think of Seattle U Gives as ‘democratic fundraising,’” says Margaret Neitzel, ’19, director of Annual Giving.

During the 24-hour fundraising initiative, more than 40 challenges were met, unlocking funds benefiting scholarships, programs and initiatives across the university. One of the milestones of the day was unlocking the $15,000 President’s Club Our Moment for Mission Challenge by reaching 500 gifts from alumni.

The pandemic has disrupted family finances creating an urgent need for scholarships and other financial support. According to the College Savings Foundation, more than 50 percent of parents with college-age students said one earner had lost a job or had work hours reduced and nearly 8 percent had a “catastrophic” experience where all sources of income were lost. Seattle U’s Parent and Family Leadership Council challenge raised more than $4,000 to support The Food Security Fund to address student food insecurity.

Supporting initiatives that advance racial equity was another priority for donors. Gifts totaling more than $19,000 were invested in the Black Student Union (BSU) Endowed Scholarship, the first student-led scholarship specifically for Black students at Seattle U. The BSU Scholarship’s purpose is to increase the enrollment of Black students and help them persist and graduate with fewer financial concerns.

Funding educational kits for neighborhood families to strengthen the home-to-school connection was the focus of the Center for Community Engagement’s (CCE) challenge.   Launched in 2011, the Seattle University Youth Initiative (SUYI) is the signature initiative within CCE that unites campus and nearby neighborhoods to support youth and families. More than $22,000 was raised to fund educational supplies, family activities and translated information, providing connections between classrooms, virtual SUYI programs and at-home learning.

For Athletics, 2,281 gifts were made to fund resources supporting Seattle U’s more than 350 student-athletes, as well as the coaches and staff, allowing them to continue to excel in competition, the classroom and the community.

Social media and Seattle U Gives Ambassadors were key to this year’s success. Community members mobilized their networks by emailing, sharing, forwarding and posting stories of personal impact and inspiring peers to join them in support of a Seattle U initiative they championed. Seattle U Gives also served as an opportunity to participate in The Campaign for the Uncommon Good. Each pillar of Seattle U’s comprehensive campaign, the largest in university history, was represented in Seattle U Gives. Fundraising efforts for The Campaign for the Uncommon Good continue through June 30.

“It’s the act of giving that is so important and deserves to be recognized,” says Ali Bessee, ’20, assistant director of Annual Giving. “More than half of all the gifts contributed during Seattle U Gives were $25 or less, yet together we raised more than half a million dollars—that’s the power of the full Seattle U community.”