Nationally Recognized and Replicated Center for Community Engagement to Be Named in Honor of Fr. Sundborg 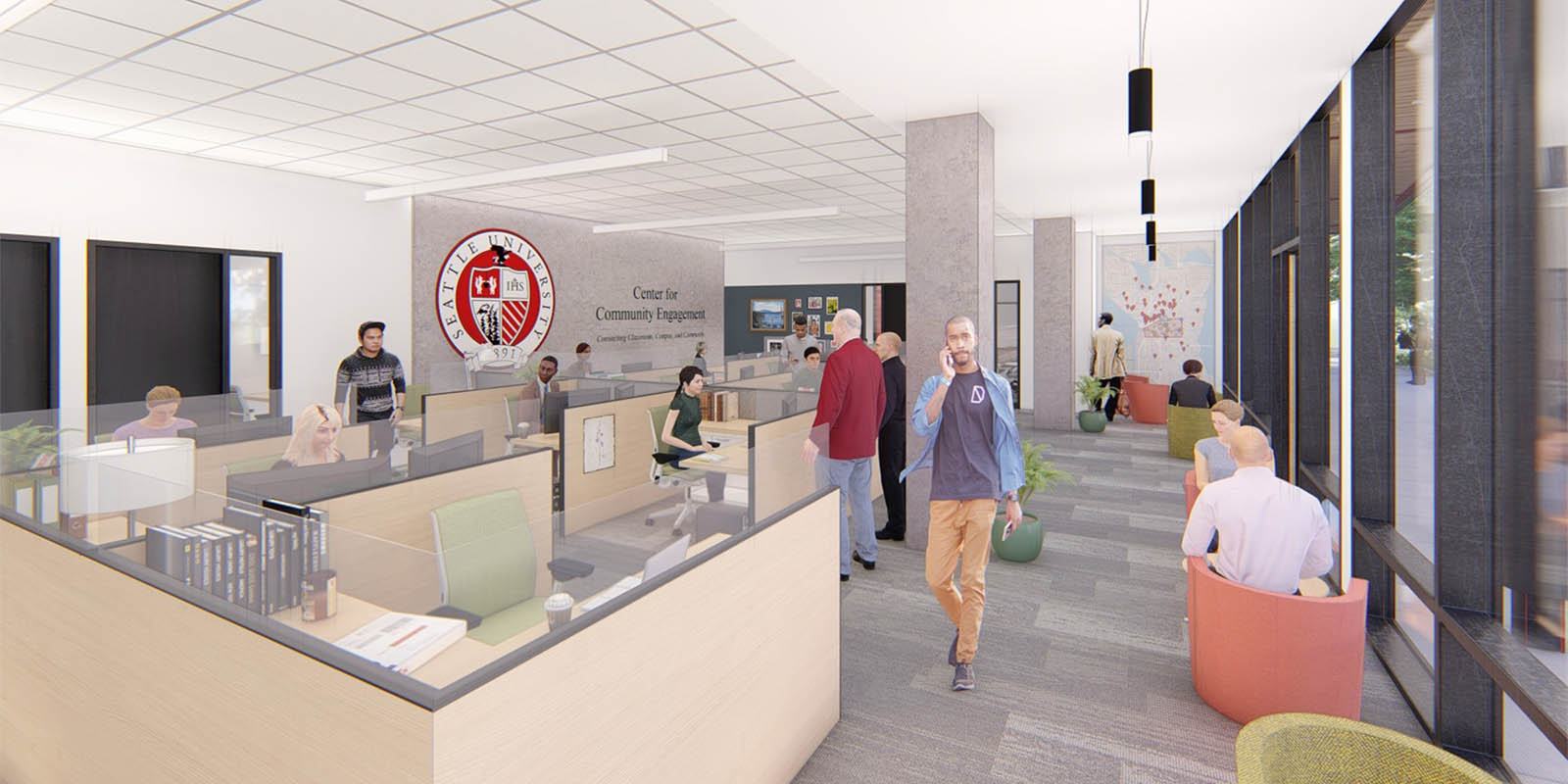 Interior rendering of the new Sundborg Center for Community Engagement.

President Sundborg’s vision and deep commitment to the Seattle community shaped the launch of CCE.

Father Sundborg previously announced he will step down in June after leading the university for 24 years.

Fr. Sundborg has made community engagement a priority for the university and its educational mission. Under his leadership, SU has expanded service-learning opportunities for students and strengthened its partnership with the university’s neighbors through the Center for Community Engagement (CCE) and the Seattle University Youth Initiative (SUYI).

The Sundborg Center for Community Engagement will move from its current location to the new Jim and Janet Sinegal Center for Science and Innovation in July 2021.

“Among Jesuit universities in the United States Father Steve’s advocacy for community engagement stands out,” said Kent Koth, director of the Sundborg CCE. “Many of my colleagues from other Jesuit institutions have expressed how Father Steve’s leadership, vision and long-term commitment has led to Seattle U’s national success and recognition for community engagement.”

Nationally renowned, the CCE has been the driving force behind Seattle U’s distinctive place-based approach to community engagement. In 2012, the university received the President’s Award for Community Service, the highest federal honor a university can receive for community engagement and in 2020 was awarded an Impact Award, one of only four recipients among a national network of 1,000 Campus Compact member institutions.

In 2019, Fr. Sundborg received the Engaged Presidential Leadership Award from Campus Compact’s Western Region. Described as “the only national higher education association dedicated solely to campus-based civic engagement,” Campus Compact is a national coalition of 1,000-plus colleges and universities “committed to the public purposes of higher education and building democracy through civic education and community development.”

One of the hallmarks of Seattle U’s academics is community engagement and since its founding in 2004, the CCE has become a national model for community-engaged learning.

During Fr. Steve’s tenure as president, Seattle U and its community partners launched the Seattle University Youth Initiative, the largest community engagement initiative in university history and a centerpiece of the CCE. Celebrating its 10th anniversary, the Youth Initiative’s place-based focus encompasses three vibrant and historically important Seattle neighborhoods: the Chinatown-International District, Yesler Terrace and the Central District. Creating a “cradle-to-career” pathway of support for 1,000 children and their families living in a two-square-mile neighborhood adjacent to campus, the initiative also deepens the educational experiences of Seattle U students and enhances professional development opportunities for faculty and staff.

“It has been a pleasure to serve alongside Father Steve on the Seattle University Youth Initiative Board,” said Dwane Chappelle, director of the City of Seattle Department of Education and Early Learning. “His commitment to moving beyond diversity and towards racial equity has been a key driver in ensuring the success of the CCE. Father Steve’s vision and leadership has helped ensure the CCE continues to serve, support and impact students farthest from educational justice.”

With a vision to provide a pathway from preschool to college, the Youth Initiative is a multifaceted community collaboration that provides holistic support to ensure disadvantaged youth have the best chance of graduating and continuing to college. Students and staff work at Bailey Gatzert Elementary, Washington Middle and Garfield High schools.

“This effort is absent even a hint of artifice. The relationship between Seattle U and its neighbors works both ways. A community gets to tap into the considerable resources of the private university on the hill and Seattle U gets to sharpen the Jesuit philosophy of public service that helps distinguish it from other schools.” —The Seattle Times

The Sundborg CCE facilitates service placements at community-based organizations for more than 500 students each quarter and develops project-based service-learning courses to address specific technical and research needs of local residents and families and the neighborhood organizations that work for and with them. With more than 150 community partners, Sundborg CCE’s place-based approach to service spans every neighborhood in Seattle.

In 2019, a $1.6 million grant from the Bill & Melinda Gates Foundation to Seattle U was used to launch Seattle’s first Local Improvement Network for elementary school communities and their neighborhood partners. SU’s Sundborg CCE and College of Education will serve as lead partners for the network, which will utilize improvement science to close elementary math gaps by focusing on social-emotional academic development among local pre-school and elementary school students.

Guided by a commitment to racial equity, Seattle U is convening institutional partners including Seattle Public Schools, Seattle Housing Authority, youth and family community-based organizations, the Community Center for Educational Results and the City of Seattle to co-create the network’s strategies, goals and assessment measures. The network will emphasize intersecting influences on student learning including early and extended learning, family engagement, housing and instructional practices.

In addition to the CCE being named in Fr. Sundborg’s honor, the university has also launched the Stephen V. Sundborg, S.J., Center for Community Engagement Endowment. The fund will provide operational support for Seattle U-led community engagement activities and programs furthering efforts to transform the university and Seattle community. Investments will help deepen student learning, creating a culture of service and amplifying CCE’s mission of pursuing a more just and humane world. Gifts can be made to honor Father Sundborg’s legacy at www.seattleu.edu/giving/honoring-father-steve/.