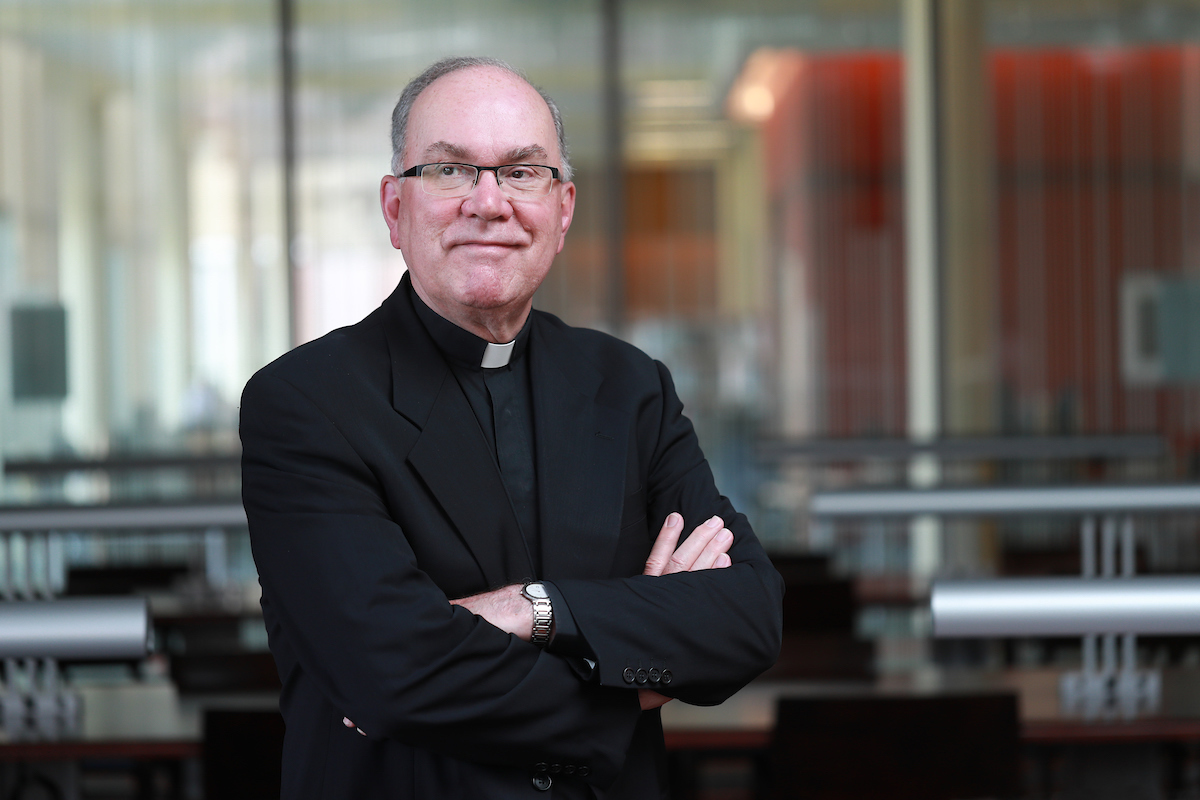 He’s been called a builder, a steadying force, guiding light, a deft leader. These are just a few of the defining qualities of Stephen Sundborg, S.J., Seattle U’s longest-serving president who, after 24 years at the helm, will leave the university in June.

Many of the university’s most pivotal moments—from the mission statement to the creation of the Center for Community Engagement and return to Division I, the growth and physical transformation of the campus to the creation of impactful programs benefitting students—have happened under the direction and advocacy of President Sundborg.

As he steps into a new phase of life, Father Steve will leave having helped move the university from a one-time “hidden gem” into a nationally known university recognized for its academic excellence, top faculty-scholars, commitment to social justice and care for the whole person. And he will depart with the university on strong footing, all the more remarkable considering the unprecedented challenges presented by a once-in-a-century pandemic.

In this first in a four-part series celebrating the achievements, leadership and legacy of President Sundborg, we showcase some of the programs, initiatives and organizational changes he’s credited with in building the Seattle University of today.

Mission-Driven
In 2003, President Sundborg was the architect and author behind the university’s Mission Statement, dedicating the university “to educating the whole person, to professional formation and to empowering leaders for a just and humane world.”

The mission puts students at the center of all we do and all we are as a university and underscores the new strategic directions for Seattle U, shaping its vision for the future. During his presidency, Father Steve developed strategic opportunities for the university community to carry out the mission, championing endeavors such as the Costco Scholarship Fund for underrepresented students; the Center for Community Engagement and Seattle University Youth Initiative, which strengthens the educational support systems for local youth; and Mission Day. The mission imbues everything, from academic offerings to campus life programs.

“You feel like the fabric of our mission has been strengthened and expressed through his presidency,” says Joe Orlando, director of Seattle U’s Center for Jesuit Education.

Great Facilities
Over the term of his presidency, Fr. Sundborg has been at the forefront of many of the physical changes—by way of new facilities and services—that have transformed the Seattle U campus.

“Just look at where we are now vs. 24 years ago,” says Joe Zavaglia, ’71, who served several years on the Board of Regents. “It was Fr. Steve who had the vision to build out Seattle U into what it is today.”

Under his leadership the Seattle U campus has blossomed with the construction of, among other facilities, a Student Center, the School of Law, residential housing, the Lee Center for the Arts, a reimagined and renovated Lemieux Library and McGoldrick Learning Commons and a modern fitness center. And this fall, the new hub for STEM education—the Jim and Janet Sinegal Center for Science and Innovation—will open.

Community Builder
The Center for Community Engagement (CCE) serves as the main entry point for students, faculty and staff who want to engage in the local community through service learning, mentorship and outreach. It also acts as the focal point for community-based organizations and governmental institutions seeking university support to address unmet needs. Three out of four Seattle U student engage in service—above the national average.

Back to Division I
Led by the president, Seattle U began its return to NCAA Division I membership in 2007. The university completed the process in 2012 by earning D-I membership and joining the Western Athletic Conference (WAC) as a full member.

“I was honored to serve on the committee to evaluate the return to Division I athletics,” says Zavaglia. “Father Steve is the person we thank for making this courageous decision and his passion for Athletics reignited a flame and longtime passion for many alums that was so needed.”

“He’s put us in the position in Athletics to compete against the top universities academically and athletically, but I also feel like I have a teammate in Father Sundborg,” says Pete Fewing, longtime head coach of men’s soccer.

In Part II, President Sundborg’s skillful leadership expressed in his own words and through the lens of Jesuit education.