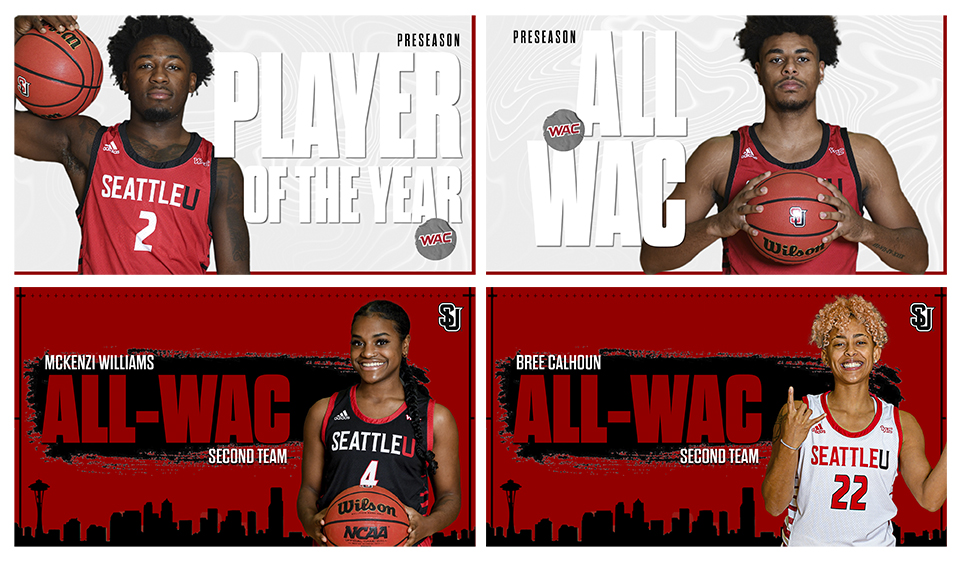 Even before hitting the court for the new season ahead, Redhawks basketball players are already winning. Members of the team recently received pre-season All-WAC (Western Athletic Conference) awards.

Darrion Trammell was selected as the WAC Men’s Basketball Preseason Player of the Year in a vote of the league’s 13 head coaches. The WAC unveiled preseason polls, as voted by coaches and the media, as well as Preseason All-WAC Teams.

Women’s basketball players Bree Calhoun and McKenzi Williams were both honored. Calhoun earned Preseason All-WAC Second Team in both coaches’ and media voting, while Williams earned Second Team in the coaches’ voting. This is the third consecutive year that the women Redhawks have had multiple players earn preseason honors from the WAC.

Trammell and Grigsby were a one-two punch for Seattle University last season, finishing first and second in the WAC in scoring at 20.5 and 17.8 points per game, respectively.

Trammell ranked in the Top 50 nationally in eight categories, including points per game (19th), assists per game (33rd) and steals per game (38th). He was a two-time WAC Player of the Week, All-WAC First Team, WAC All-Newcomer and NABC All-District First Team selection.

Grigsby earned WAC Player of the Week once, was a Preseason All-WAC selection and earned Second Team All-WAC honors to close out the year. He led the team in scoring eight times, poured in more than 20 points in four consecutive games midway through the year and was second on the team in made three-pointers.

The Redhawks return all five starters and 13 total letter winners from 2020-21, when they went 12-11 overall and advanced to the WAC Tournament semifinals during the uniquely challenging season.

The men open their 2021-22 campaign on campus in the Redhawk Center on Nov. 10 against Alcorn State before debuting as the first basketball game to take place in Climate Pledge Arena on Nov. 14. The game against Idaho State will serve as the culminating event of a festive Homecoming Week at SU.

More on the women’s honors

Calhoun finished 2020-21 as the WAC's Defensive Player of the Year, making the All-Newcomer Team and the All-Defensive Team. The Granada Hills, Calif., native led the conference in steals, finishing fourth in the country with 83 steals in 25 games. Her 5.6 assists per game were second in the conference as well. She averaged 12.8 points per game, reaching more than 20 points three times.

For Williams, the new honor comes on the heels of her All-WAC Second Team award following the 2020-21 season. The Seattle Sports Commission Female Sports Star of the Year, Williams was one of just three players in the WAC to average more than 15 points a game. Six times Williams scored 20 points, including a 36-point game at Idaho that set a new SU Division I program record. Williams averaged four rebounds a game and was second on the team with 2.6 assists per game.

Calhoun and Williams join Courtney Murphy as the active Redhawks to earn preseason honors from the WAC. This is the second year in a row Williams has earned Preseason All-WAC Second Team.

The season kicks off on Nov. 9, when the Redhawks play host to Northwest.