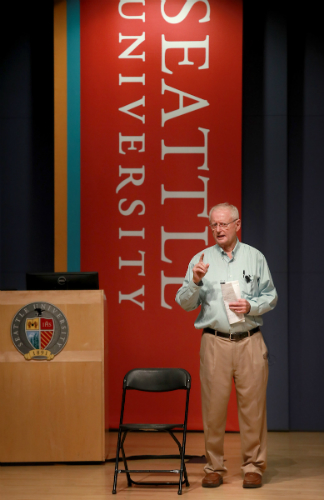 One of three Jesuits in the world who answers to the titles “Father” and “Roshi” or venerable Zen teacher, Robert Kennedy, S.J., visited Seattle University on Thursday, Jan. 23.

Father Kennedy is a psychotherapist, former professor of theology at Saint Peter’s University, author of Zen Spirit, Christian Spirit and Zen Gifts to Christians and a representative of the Institute for Spiritual Consciousness in Politics at the United Nations.

He spoke on "The Last Roshi" at Pigott Auditorium as part of the Interreligious Dialogue Initiative Lecture Series presented by the Institute for Catholic Thought and Culture.

Established in 2012, the Interreligious Dialogue Initiative aims to awaken sensibility in the Seattle U. community to the richness of the world’s religions, as abundantly represented on its campus, and to move beyond mere tolerance to engagement.