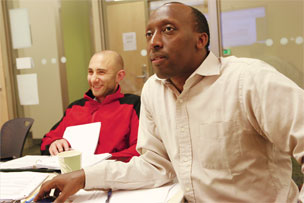 A former Seattle University Jesuit is taking on a key leadership post in the Society of Jesus. Jean Baptiste Ganza, S.J., has been appointed regional superior for the Jesuits of the Rwanda-Burundi Region. He will begin his new role on Dec. 3, the Feast of Francis Xavier.

Father Ganza spent a number of years at Seattle University while earning his MBA from the Albers School of Business and Economics. After graduating in 2012 he returned to his home country of Rwanda to continue building and running a Jesuit school in Kigali, a community ravaged by the genocide of 1994

Many members of Fr. Ganza's family, including his mother and five siblings were murdered during the conflict. His incredibly tragic but ultimately uplifting story was shared in the fall 2011 issue of Seattle University Magazine.

"I am grateful to the Seattle U community," says Fr. Ganza. "I gained so much from my time there. On top of the knowledge and degree I acquired from (the) Albers (School of Business and Economics), I made friends among students and faculty. My current work running Saint Ignatius School and raising funds to continue building it benefited from what Seattle U offered me. To lead the Jesuits in Rwanda and Burundi, I will always count on your support and prayers."