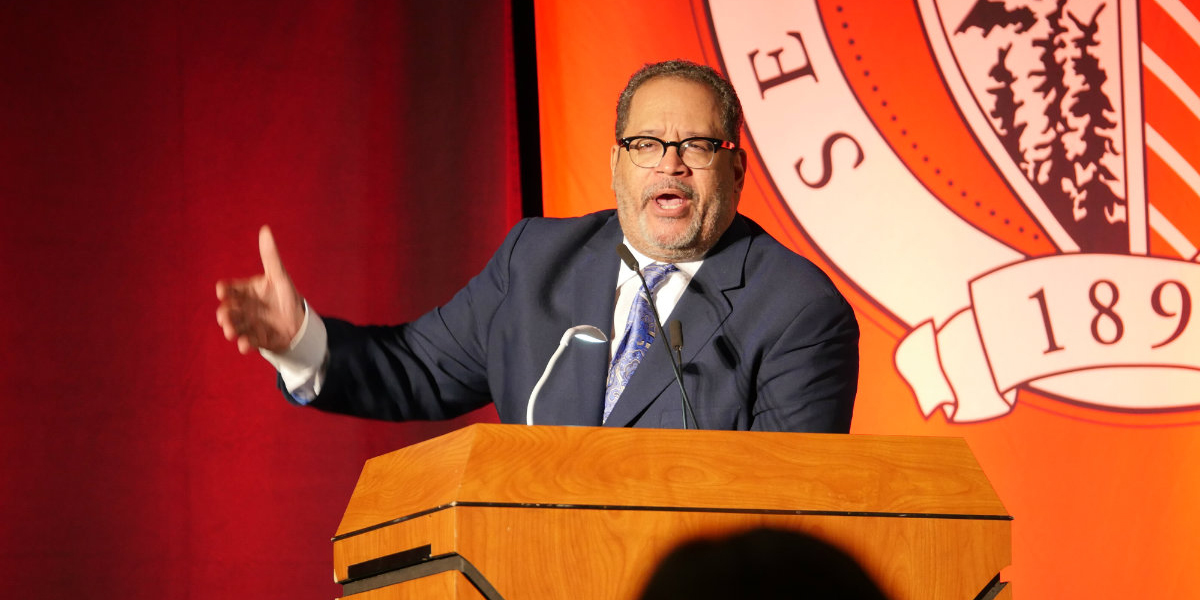 SU faculty, staff and students were invited to get a little uncomfortable at this year’s Mission Day on April 11.

President Stephen Sundborg, S.J., framed the morning’s conversation on "Diversity, Equity and Inclusion at the Heart of Jesuit Education” by reiterating the importance of SU’s work in recent years to become a more diverse and inclusive institution.

“Nobody gets a pass,” Father Sundborg said. “No person at Seattle University, no student at Seattle University, no professor, no president, no administrator, no director, no coach—none of us, regardless of our gender, our race, our economic background—no one gets a pass on this subject. We all have to engage with it, with humility, with courage. We have to engage with it, supporting one another, being willing to critique one another and loving one another.”

The keynote speaker was Michael Eric Dyson (pictured), a sociology professor at Georgetown University, preacher, nationally known voice on racial justice and the author of several books including the bestseller Tears We Cannot Stop: A Sermon to White America.

“Whiteness,” he continued, “has the prerogative and the privilege to remain invisible to itself in order to protect itself from an awareness of its effects and therefore to provide a measure of willful ignorance to keep it from being held to account.”

Dyson added that a university such as Seattle U is ideally suited to introspection and critical thinking as it relates to race. “The work we have to do,” he said, “is consider whiteness as a political fiction, a projection of opportunity by a group that had enough power to enforce its way as theway.”

He also spoke of empathy as “a radical identification with the other and imagining the other as the self. And imagining what limitations might be bitterly and arbitrarily imposed upon them. And to imagine what it might mean to be somebody else. Jesuit education is critical in that regard because, unlike other religious, the Jesuit tradition is about a deliberate engagement with the other in a radical identification with the most vulnerable in order to uplift the entire project, the community, the agenda of the university, the moral vision, the mission of what this institution and other institutions like it should embody.”

Sponsored by the Office of the President, Office of Diversity and Inclusion, and the Center for Jesuit Education, Mission Day also featured remarks by Natasha Martin, vice president for diversity and inclusion, as well as a panel of faculty, staff and students. The day was begun with a stirringly beautiful prayer sung by Emi Wheeless ’19.