That's President Herman to you 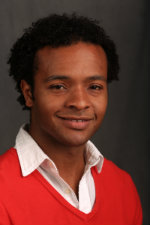 SU Jesuit Lorenzo Herman, who is studying in the School of Theology and Ministry, has been installed as president of the National Black Catholic Seminarians Association.

A recent article on Herman's installation, which appears on the Society of Jesus in the United States website, begins:

"Jesuit Lorenzo Herman’s life is anything but predictable. Prior to joining the Society of Jesus in 2007, Herman – known for his nerves of steel – worked an in-flight refueling specialist aboard a KC135 Stratotanker, a flying gas station. After leaving the Air Force, Herman turned his attention to nonprofit work, spending the better part of a decade helping African-American and Latino HIV and AIDS patients navigate the healthcare system. This week, the Cleveland native takes the reins of the National Black Catholic Seminarians Association. Not bad for a kid raised a Baptist."