Seattle University in Top 5 Percent of Schools for Sustainability 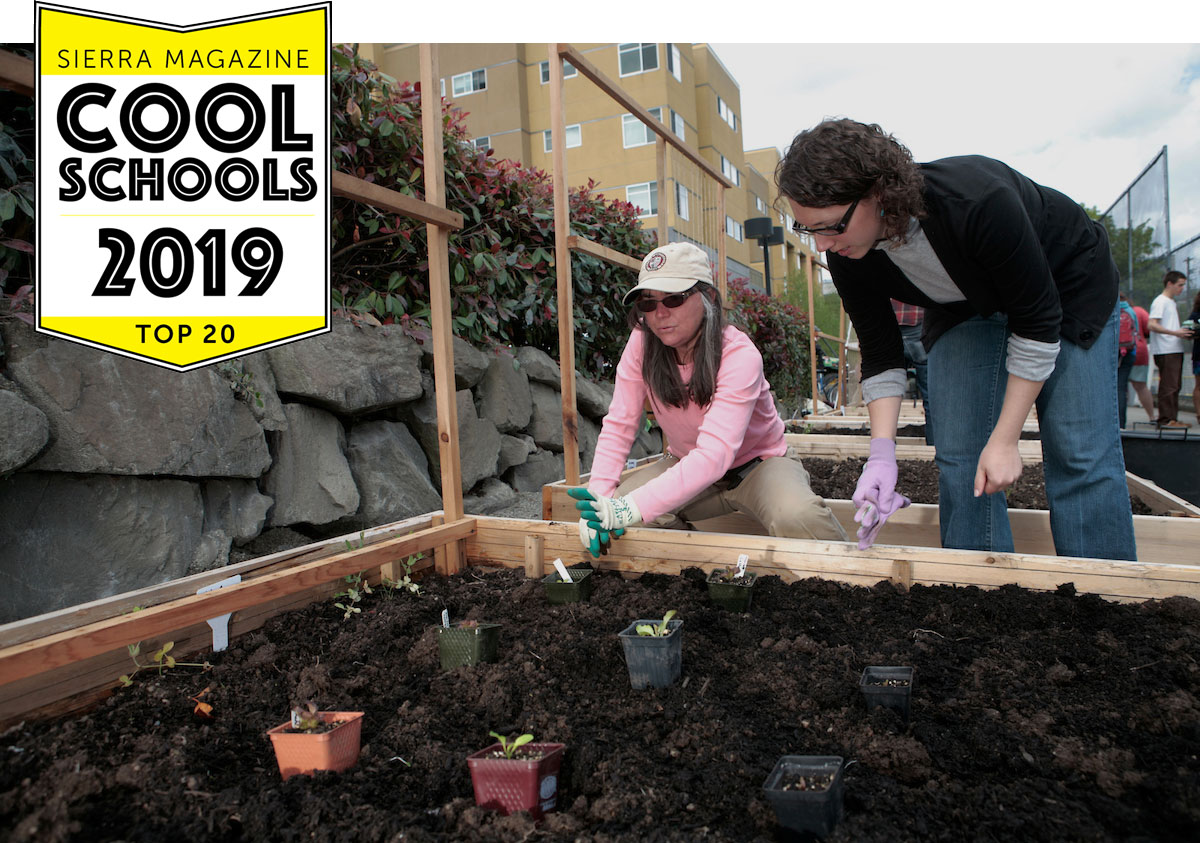 Seattle University is once again a leading university in the nation when it comes to sustainability, according to the 13th annual “Cool Schools 2019” ranking by Sierra, the national magazine of the Sierra Club. Seattle U earned a spot in the magazine’s top 20, placing #13 out of 282 schools (the top 5 percent of all schools ranked) in the U.S. and Canada. It is the only university in the Northwest to place in the top group.

In its story online summarizing the achievements of the Top 20, Sierra noted that last year “Seattle University’s board voted to fully divest from fossil fuels within five years. The school also reduced water use by 25 percent thanks to low-flow showerheads and sink aspirators,” which saved about $100,000 and 4 million gallons of water. Sierra noted that after a waste management audit revealed the campus community wasn’t always using the correct recycling, trash and compost bins, the school held a recycling rally and student representatives doubled down on disposal education in the residence halls. Seattle U’s pesticide-free grounds are nourished with compost made from pre-consumer dining hall food waste and faculty and students are now planning a Climate Justice summit for 2020.

“It’s wonderful to see us ranked in the Top 20 once again in this very competitive field,” says Phillip Thompson, PhD, professor of civil and environmental engineering and director of the Center for Environmental Justice and Sustainability. He says Seattle U scored especially well in the curriculum and public engagement categories, which mirrors the school’s strong points in the recent separate sustainability ranking by the Advancement of Sustainability in Higher Education.

“The new academic year will see us working harder than ever to keep earning top rankings that reflect our new sustainability initiatives for academics, co-curricular activities and facilities,” Thompson says.

According to Sierra, “each of the schools ranked in the Top 20 have displayed a deep and thorough commitment to protecting the environment, addressing climate change and encouraging environmental responsibility through their curriculum and on-campus operations.”

Using a customized scoring system, Sierra’s researchers ranked colleges and universities based on academic criteria like environmentally focused curriculum, student engagement with environmental activism, operations such as renewable energy generation and waste management and planning and administrative standards. Sierra used the STARS scores from the Association for the Advancement of Sustainability in Higher Education (AASHE) and then processed the data through a custom-built formula that ranked the schools according to its own weighting criteria, which were based on Sierra Club priorities. As in past years, the magazine also had a supplemental question about fossil fuel investments.

Seattle U began participating in the rigorous benchmarking STARS (Sustainability Tracking, Assessment & Rating System) program in 2016 and out of the gate achieved a gold rating. The university also achieved gold ratings in 2018 and 2019.

“We’re inspired by the creative and innovative ways colleges and universities across North America are working to tackle the climate crisis and move toward a sustainable future,” said Jason Mark, Sierra’s editor in chief. “Each year, our rankings have shown increased commitments to clean energy, more creativity on waste reduction and involvement from a greater geographic range of schools. Even when government leaders fail to step up, students, faculty and administrators are taking action."