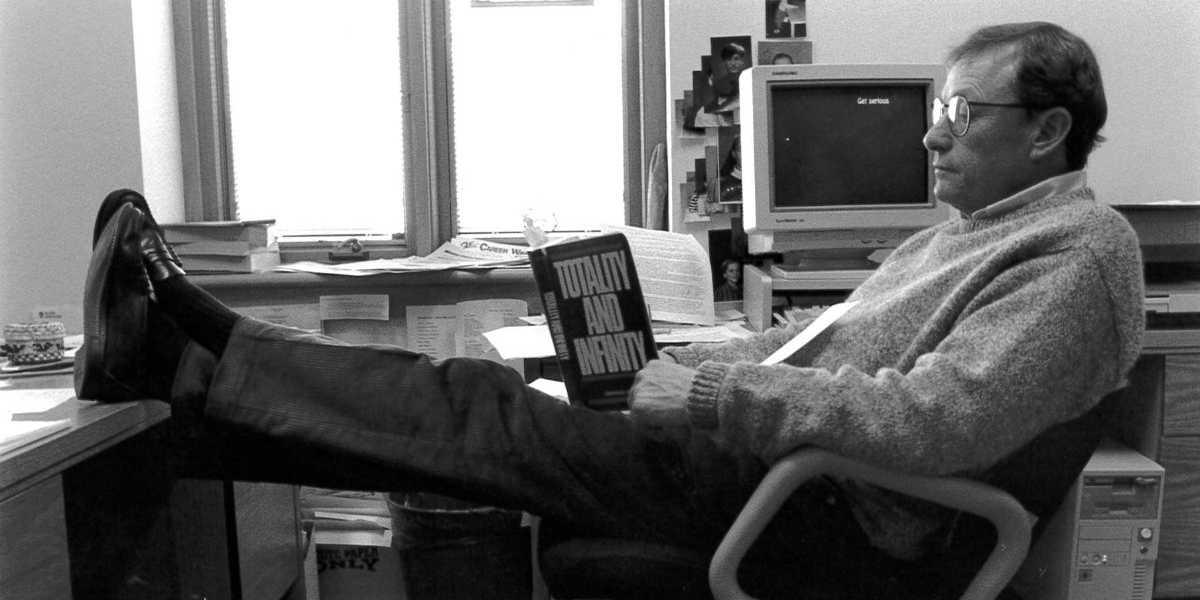 Seattle U colleague reflects on the life of George Kunz, a true person for others.

George Kunz, professor emeritus in the Department of Psychology, passed away on April 28. “George was a beloved member of our community for nearly a half-century, beginning his teaching career in 1971 and remaining active as faculty emeritus after his retirement in 2012,” said President Stephen Sundborg, S.J.

George Kunz was the first person I met when I came to Seattle in February of 1995 to interview for the Masters of Arts in Psychology program at Seattle University. During our interview, his warmth, deep care, and seemingly boundless energy were contagious. He was a philosopher, not a clinician, he told me, but his whole purpose in life was to bring phenomenology and ethics out of the world of the academy and into life through healing practice; his purpose was to train the healers. Over that hour, we agreed that intellect and “smarts” were only good insofar as they could be used in service to help people and the world.

During this time between 1995 and 1997 when I graduated from SU, Dr. Kunz, was finishing the writing of his opus, a work entitled, The Paradox of Power and Weakness: Levinas and an Alternative Paradigm for Psychology. The central thesis of this work is that the meaning of life is to be found paradoxically not in striving for oneself but through suffering for the other person’s suffering in simplicity, patience and humility.  This premise became and remains the bedrock of a treatise on service and the foundation of the Masters Program in Psychology at Seattle University.

In 1971 while he was finishing his PhD in Psychology from Duquesne University, George Kunz began teaching at Seattle University and “almost immediately began planning for a graduate program in existential phenomenological psychology.” In 1978 and 1979, after recruiting Steen Halling to come to Seattle University, George and Steen ran an NEH grant funded pilot study to begin the Masters of Arts in Psychology (MAP) and officially began with the first cohort in the Fall of 1981.

Through the years, George stayed faithful to a vision for a deeply humanistic and philosophically rich existential phenomenological focus for psychology, which would allow for the emergence of profoundly compassionate communities of healers. George held fast to the vision he and Steen Halling began that centered on the primacy of human experience and the priority of responsibility in the ethical relationship. Over the years, the contagion of George’s passion has created ripples through some of the deepest friendships and creative partnerships in the MAP program and the philosophical community. His colleagues, Drs. Steen Halling, Lane Gerber, Jan Rowe, James Risser and Kevin Krycka were beloved friends and passionate advocates for this vision.

Finally, after more than 40 years of teaching over 3,000 students, George Kunz retired in 2012. Over the past seven years, George has been dedicated to preserving both the memory and the continuation of the vision that inspired him from the first.

And always, we gratefully remain, the family of friends and students who were so well cared for and nurtured through these years. As therapists and healers, we continue to be devoted for our lifetimes to the application of this vision laid out for us by our teachers and mentors. The fingers and the reach of this great legacy will continue on in the lives who were touched by George’s immense wisdom; the expression of a living ethical psychology that elevated the human before any possibility of reduction to system or reason.  And more than this, the reach of this insatiable prioritizing of the Other will live on through the fecund healing practices that continue to move into the world in each face-to-face relation.

George’s pride and love for us was always shared generously and he died as he lived, still striving and reaching for the infinite Other, who is more than any thought or idea we could ever have, but first and foremost calls us to be responsible.

A funeral for George Kunz will be held 11 a.m. on Thursday June 6, at St. Joseph. A reception will follow. Listen to an interview with George Kunz.