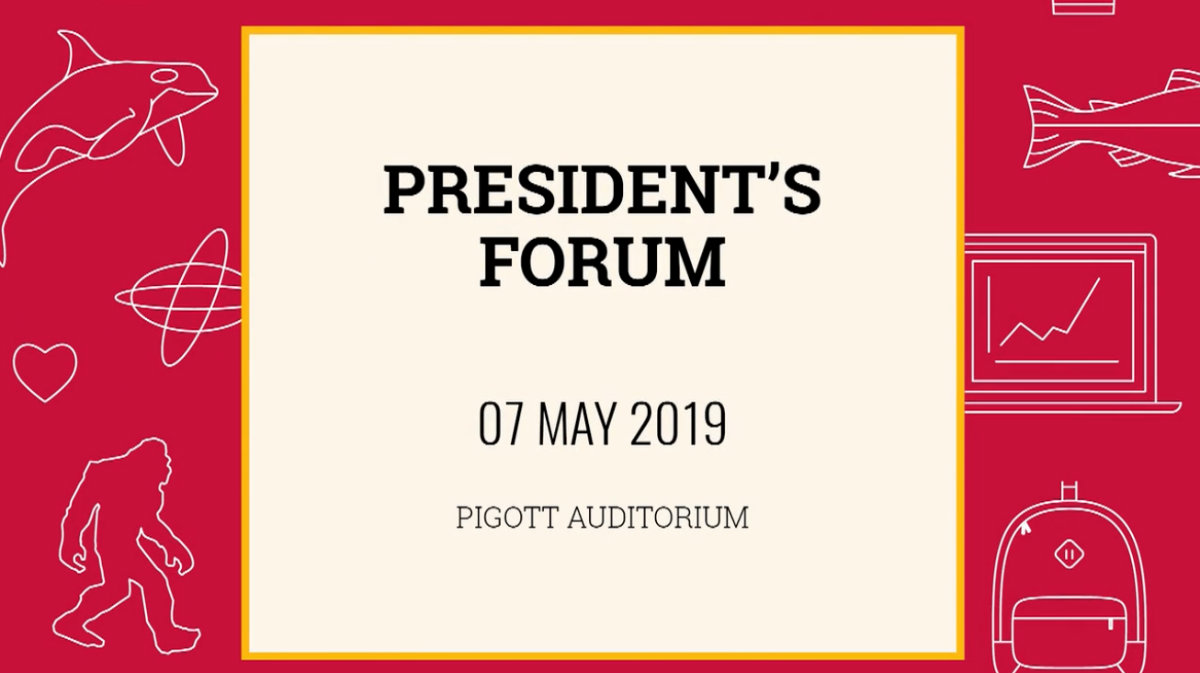 At his spring quarter President’s Forum, Stephen Sundborg, S.J., addressed a number of important initiatives and developments at the university. Here are four takeaways from the forum, which can be also be viewed in its entirety.

“The biggest thing that’s been going on here at Seattle University these (past few) months is the strategic planning process,” said Father Sundborg. Led by Bob Dullea, vice president for university planning/vice provost, and Jen Marrone, professor of management, the Strategic Planning Steering Committee is now ready to share what they have learned as well as next steps in the development of the plan.

“In my experience, I have never seen in our university such an intense and such a significant engagement with the whole of the university about our future. I want to thank all of you for being co-creators of the future of Seattle University.”

The president called attention to HR 6, a bill before Congress titled  the American Dream and Promise Act, which is expected to come up for a vote this month. “That would be the most significant thing possible to serve our undocumented students,” Father Sundborg said.

The bill expands access to federal student aid for undocumented students, protects against the deportation of high school and college students and would extend the conditional permanent resident status from eight to 10 years. As a member of the Presidents’ Alliance on Higher Education and Immigration Father Sundborg is working to support the passage of HR 6. He encouraged faculty and staff to do the same. (Contact your representative to urge passage of HR 6*.)

* Update (May 30, 2019): The Dream Act has now passed out of committee in the House and is expected to come up for a floor vote soon. The Senate has yet to take up similar legislation. Now is a good time to contact your representative and senators to urge passage.

As the president pointed out, the FY20 budget is intended to lay a foundation for the initiatives that will come out of the strategic planning process. While the overall budget increased by 3.1 percent, reallocations and prior year reserves were needed to balance the budget and support strategic investments in compensation and program expansion. The president noted that using reserves and funds from quasi endowments is not sustainable. “We’re at a point where we’re going to need to do a real pivot,” said Sundborg, which he added will involve some “hard decisions.”

Addressing a recent situation in which a university-owned laptop containing personal information of SU employees and their dependents was lost on a metro bus, Father Sundborg said: “As president, I deeply care about our data security and the protection of our personal information.”

At the president’s invitation, Chief Information Officer Christ Van Liew, spoke about the incident. “We understand the possibility of your personal data being available out there…is not just frustrating but unnerving.”

“We are taking this very, very seriously,” said Van Liew. “Nonetheless, I would admit that is statistically unlikely that that data has been accessed. Still, we’re treating it as if it has been.” (As referenced in letters sent to potentially impacted employees, the university is offering free credit monitoring for a year.)

While the standard practice for Information Technology Services (ITS) is to encrypt all new devices before they are deployed to employees, the hard drive of the laptop in question was not encrypted due to technical and process issues that Van Liew said have since been addressed. Among other new measures being undertaken, ITS is in the process of inventorying all university-owned devices to determine which ones are encrypted and which need to be protected as such.