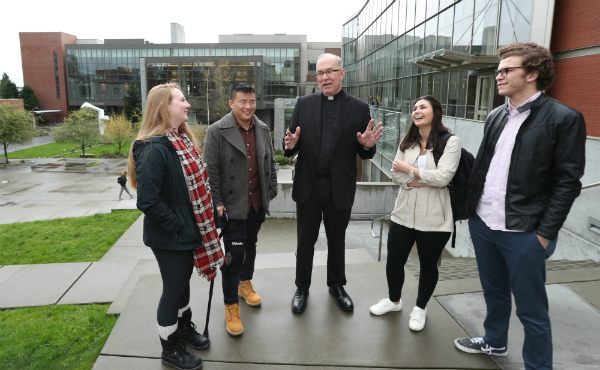 Seattle University President Stephen V. Sundborg, S.J., will be celebrated as the 81st recipient of the prestigious Seattle-King County First Citizen Award at a civic banquet on May 23.

Seattle University President Stephen V. Sundborg, S.J., will be celebrated as the 81st recipient of the prestigious Seattle-King County First Citizen Award at a civic banquet on May 23.

One organization executive described this year’s Seattle-King County First Citizen as a “selfless leader” who “shows up” and praised him for his deep commitment to community building. A company president lauded his “obvious heart of a servant.”

Seattle University President Stephen V. Sundborg, S.J., will be celebrated as the 81st recipient of the prestigious Seattle-King County First Citizen Award at a civic banquet on May 23. The not-for-profit event will honor his multiple noteworthy contributions and initiatives for the betterment of his university plus a wide-ranging list of professional, charitable and civic organizations.

Now in his 22nd year as president, Father Sundborg is known as a tireless advocate for marginalized residents and for nurturing the Jesuit university’s growth and high rankings “for academic rigor, sustainability, community service and social justice.” He plans to retire at the conclusion of his current five-year term as president.

Sabey Corporation president David A. Sabey, a member of Seattle University’s Board of Trustees, described Sundborg as “a phenomenal leader who has given much to his university and to his community and asked for nothing in return.”

“I have been consistently impressed with his dedication to students, faculty, and staff, his tempered and collegial leadership abilities, and his obvious heart of a servant,” Sabey remarked.

During Sundborg’s tenure, enrollment has grown about 30 percent, to nearly 7,500 students. Concurrently, the university has added two colleges and a law school, built a student center, new library and Learning Commons, and elevated its athletics programs from a D3 to a D1 school. Building projects also include new residential housing and a Center for the Performing Arts, as well as a groundbreaking this May on a new Center for Science and Innovation that is scheduled to open in 2021.

Seattle University has earned several top rankings for its programs, including being on the U.S. News & World Report “Top 10” list of the West’s best regional universities for 18 consecutive years. For 16 years, The Princeton Review has recognized the university as one of the best colleges in the nation for undergraduate education. The values-oriented university also achieved Top 10 recognition in the Sierra Club’s magazine and its annual list of “Coolest Schools” for being eco-friendly by “mastering the art and science of campus sustainability.”

In addition to his responsibilities as Seattle University president, Father Sundborg is involved with numerous professional, charitable, cause-related, and civic organizations. He currently serves on the boards of United Way of King County, the Independent Colleges of Washington, Association of Jesuit Colleges and Universities, University of San Francisco, the Seattle Nativity School, Lakeside School and Fulcrum Foundation, to name a few. Past board affiliations include Fred Hutchinson Cancer Research Center, YMCA of Greater Seattle, City of Seattle Committee to End Homelessness, and Georgetown University.

“Father Steve has provided leadership, mentorship, and service to thousands of young people pursuing an education at SU and thousands more during his 20 years as Seattle U’s leader,” stated Diane Douglas, senior advisor at Uncommon Partners. “He has always struck me as a selfless leader keen on doing more than his part to make this region the best it can be.

Douglas praised Sundborg for his visionary leadership, which she observed for 11 years in her prior position as executive director at Seattle CityClub. “He speaks out on issues of social justice, he encourages active and engaged citizens, and he shows up at community events and models his deep commitment to community building. I’m grateful Seattle U is allowing the community to borrow him so much!”

This year’s First Citizen, who grew up in the Territory of Alaska, was ordained a priest in Seattle in 1974. After completing his doctoral studies in spirituality at the Pontifical Gregorian University in Rome, Sundborg taught theology at Seattle U from 1982-1990, and then served as Provincial of the Northwest Jesuits until 1996 before becoming the university’s 21st president.

About the First Citizen Award

The Seattle-King County First Citizen Award salutes “giving back” whether by “time, treasure or talent” and civic engagement that enhances the region’s quality of life. Past recipients hail from both the public and private sectors, ranging from humanitarian groups, corporations, charitable, health and educational institutions, to various arts, environmental, and civic organizations. (see complete list on last page).

Since its inception in 1939, the First Citizen Award (believed to be this region’s oldest such recognition) continues to celebrate community leadership, volunteerism and public service. The civic banquet to honor the annual recipients is a not-for-profit celebration of civic engagement presented by Seattle King County Realtors® and partners from the real estate community. This year’s partners for the May 23 event at the Fairmont Olympic Hotel in Seattle are John L. Scott Real Estate and Windermere Real Estate.

About the Seattle King County REALTORS®

The Seattle King County Realtors® is a nonprofit professional trade association whose goals include promoting ethical business practices and supporting policies that preserve and expand real property rights and housing affordability. Based in Bellevue, SKCR has more than 7,200 members and is a local board of the National Association of Realtors®. The term Realtor® is a registered collective membership mark that identifies a real estate professional who is a member of the National Association of Realtors® and subscribes to its strict Code of Ethics.