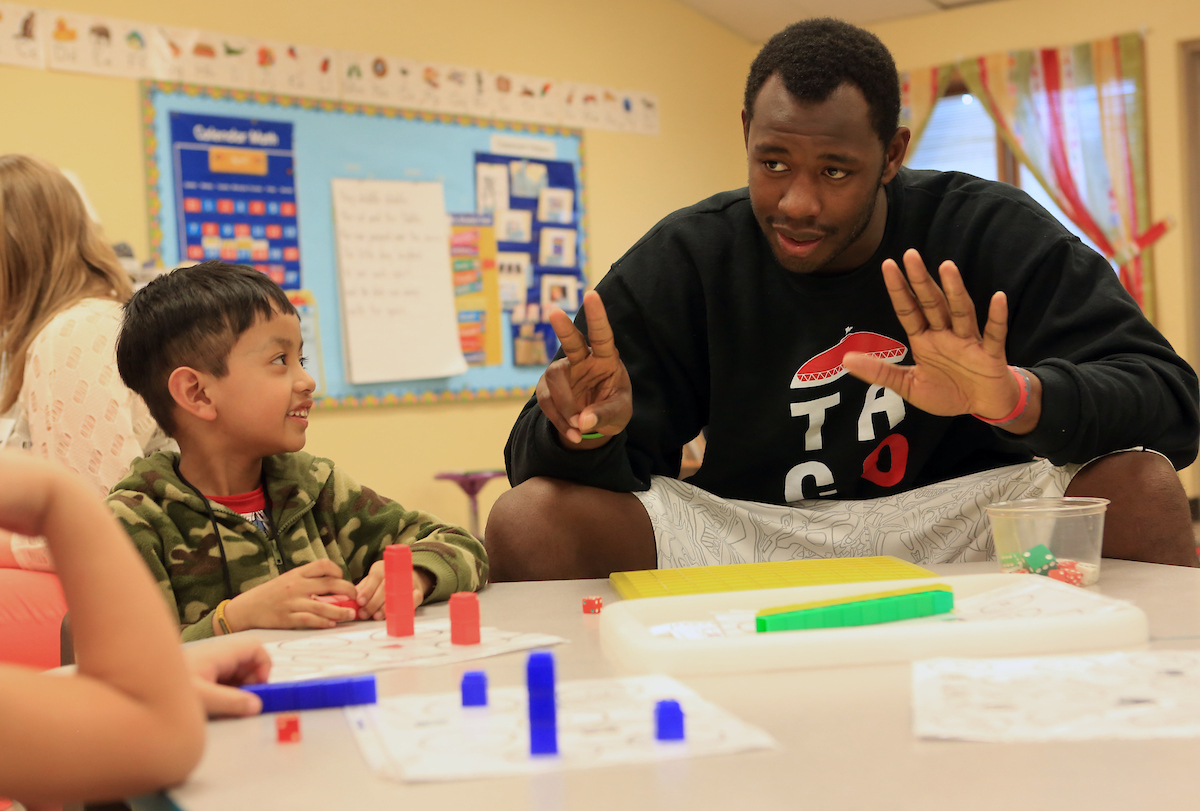 Center for Community Engagement marks 15th anniversary with many milestones.

It didn’t end there. SU students served the homeless residents and offered their expertise in areas from nursing to law. Tent City residents reciprocated with an ad-hoc teach-in, educating students about the experience of homelessness.

“It was a phenomenal way for the center to get started,” says Executive Director Kent Koth, who was hired to launch the center.

It is the kind of revolutionary work President Stephen Sundborg, S.J., envisioned when he plucked Koth from Stanford University to launch the center. At the time, the university was searching for a centralized way for faculty to connect their service-learning courses to the community.

“The Center for Community Engagement fully embodies the Jesuit mission of Seattle University of putting one’s education to work on behalf of others,” says Father Sundborg. “As president, I take my hat off to Kent, who has been the visionary leader and champion of this center all these years.”

As Koth implemented that vision, CCE’s early years set the stage for the Seattle University Youth Initiative (SUYI), the center’s flagship program that has garnered national recognition since its founding in 2011.

“It was really apparent how committed CCE was to connecting the partners and the university,” says LaKesha Kimbrough, a former program manager for the Greater Seattle Bureau of Fearless Ideas, a CCE partner. Kimbrough was so impressed by the center’s work she joined its staff last July as the SUYI Washington Middle School Success Coordinator.

“(Community partners) don’t want to be in a silo,” Kimbrough continues. “How do we authentically acknowledge that the community has an amazing history and brings valuable knowledge? And how does the university truly strive to strengthen and empower the community … without overpowering the community voice? It was very clear as a community partner that was how CCE operated.”

At St. Francis House, one of CCE’s longest partners, SU students volunteer alongside the organization’s adult volunteers, many of whom are SU alumni. Together they assist the hundreds of homeless people who come each week seeking food, clothing, hygiene and household items.

Executive Director Kathy Collins, ’09, says the students bring energy and engender community by chatting with clients over a cup of coffee, helping a client pick out a new outfit or translating for immigrants who don’t speak English.

“The students have such an open curiosity,” Collins says. “… The clients feel like they are part of the students’ education. Not all education comes from a book.”

Don Jensen, executive director of Community Lunch on Capitol Hill, and his staff have made their pitch countless times over the past dozen years. They let prospective student volunteers know how critical they are to the operation run by a small, mostly part-time staff that serves 50,000 meals each year to the hungry and homeless.

“The students provide a lot of the manpower to make our program possible,” Jensen says. “(They are) incredibly important to the success of our organization.”

Unquestionably one of the greatest successes of the past 15 years of CCE is the Seattle University Youth Initiative, which marked a new era in CCE’S history. Since its launch, SUYI has become the university’s engine for mobilizing its knowledge and resources toward an ambitious, long-term campus-community investment.

The vision for SUYI is to provide a pathway of support from preschool to college for low-income children and youth in three neighborhoods surrounding campus. As with the Harlem Children’s Zone in New York City, which inspired SUYI, the Youth Initiative convenes multifaceted community partners to provide holistic support to ensure disadvantaged youth have the best chance of graduating and continuing on to college.

SUYI began as a piloted effort at Bailey Gatzert Elementary School. SU students, faculty and staff supported teachers and staff in daytime and after-school programming for K-5 youth. During the first full year of the Youth Initiative, the Gatzert students posted the highest academic gains of any school in Seattle, Koth says.

In the past seven years, the Youth Initiative has expanded significantly, accounting today for 80 percent of the center’s work. SUYI staff work on site at Washington Middle School and Garfield High School and engage with several other schools, including four preschools. Integral to its work is the collaboration with more than 30 community partners whose missions focus on strong schools, stable housing, access to health care, safe neighborhoods and living-wage jobs. In addition, Seattle U has offered 10 scholarships to high school graduates from the SUYI neighborhoods.

Looking forward, Koth identifies the top priorities as development of a pre-kindergarten program, completion of high school programming and a deeper collaboration with the College of Science and Engineering.

SERVICE LEARNING FOR FACULTY AND STUDENTS

Meanwhile, the Youth Initiative has provided a focal point for service learning on campus. Faculty representing nearly every college and school lead a wide range of community-based SUYI projects.

“It allows me as faculty to do some meaningful consulting and gives my students the opportunity to do work on meaningful issues,” says Associate Professor Erica Yamamura, who teaches student development administration in the College of Education.

Each year 1,500 Seattle U students serve in SUYI neighborhoods. Many incoming students say it is the reason they choose to attend Seattle University.

Senior Brandon Bassler, ’19, has been involved with SUYI for all four years, assuming positions of greater responsibility. When he arrived as a freshman film studies major, Bassler volunteered for “Young Visions,” a SUYI after-school enrichment program in which he helped Bailey Gatzert fourth graders produce their own films. He has also been a tutor, mentor, team leader and Serve Local Ambassador.

As he looks toward a career in entertainment promotions, Bassler says working with the Gatzert students formed him in unexpected ways. “I think I’ve learned more about myself and how I fit into this world,” he says. “The kids complete you.”

At Washington Middle School, Kimbrough sees a similar paradigm with “barriers being broken down” as SU students and middle schoolers discover the value they each bring to one another.

“That’s when the organic community building starts to happen,” Kimbrough says. “Students on both sides start to understand more about who they are and you watch this amazing spider web of connectivity begin to happen.”

SEATTLE U BECOMES A NATIONAL MODEL

As news of the success of the Youth Initiative spread, colleges and universities around the country were eager to replicate Seattle University’s model and learn directly from Koth and other Seattle U and community leaders.

For his part, Koth is delivering a powerful message: Progress requires undoing entrenched historical systems such a racism that stymie the academic advancement of low-income communities and their residents. These barriers, he says, “hinder the transformative potential of higher education.”

“What is the purpose of higher education?” Koth continues. “Is it just to get a degree or is it for an institution as a whole to be a change agent in the world? If we bring our resources to bear, then we can contribute to the change that we hope will occur in our society.”

Koth is a leader who engages others by listening and asking questions. He describes his role in forming the Youth Initiative as listening to countless small groups until one Saturday about 300 people from the campus and community turned out for a forum “and the Youth Initiative became owned by many more people.”

From the time of SUYI’s launch, the volume of requests for tours and trainings has steadily grown. To help CCE more efficiently respond to the demand, the Annie E. Casey Foundation began funding a national network in 2014 called the Place-Based Justice Network. Now, other universities with programs similar to SUYI have joined Seattle U in the facilitating the annual national institute.

“If we can pilot creative solutions at the local level and then share what we’ve learned with others across the country, collectively we can begin to address our most significant problems,” Koth says. “This network is the edge of the field of community engagement and pushing the field to confront racism, sexism and homophobia, which limits the field from having greater impact.”

Because not all institutions can travel to participate in network trainings, Koth co-authored a book, Place-Based Community Engagement in Higher Education, in 2018 that provides case studies from five universities, including Seattle U, to guide colleges and universities in forming their own placed-based strategies like the Youth Initiative.

“He is unique in that he’s worked in higher education and nonprofits and he understands the religious and faith-based nexus,” Yamamura says. “He is very much someone who leads by example. He’s not scared to take on the big issues.

“He dug into the most difficult issues of our time such as racial equity,” she continues. “It’s courageous and keeps me wanting to partner with him.”

Ever plainspoken, Koth describes his life’s work this way: “It’s hopeful work. It’s forward-looking work. It’s really what Jesuit education is all about.”

SUYI: BY THE NUMBERS