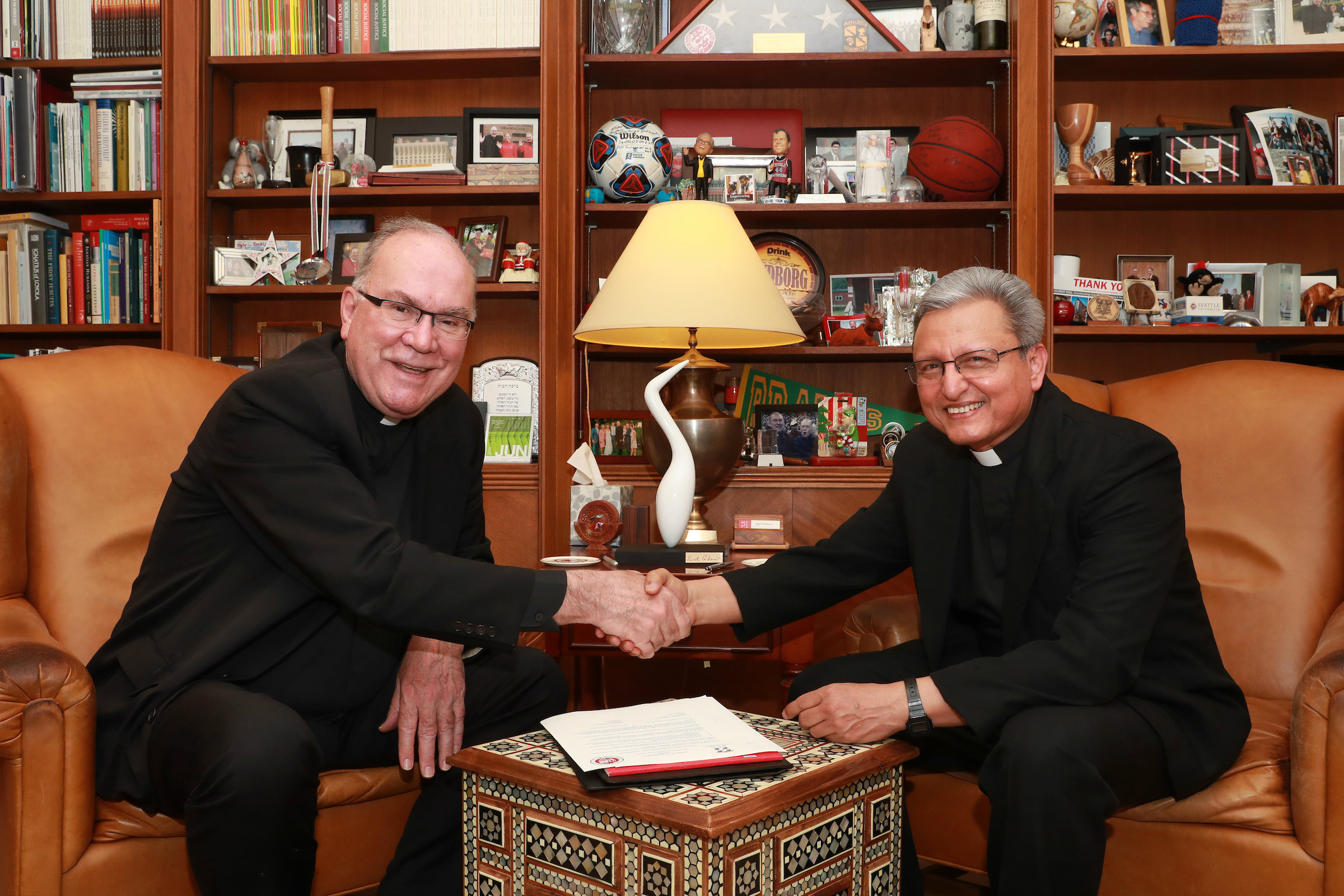 Days before he received an honorary doctorate during Seattle University’s undergraduate commencement ceremony, José (Chepe) Idiáquez, S.J., president of the Universidad Centroamericana in Managua, Nicaragua, spoke about the current crisis in his country and its impact on the UCA, our sister Jesuit university.

Visit Father Chepe honored for a story by the Association of Jesuit Colleges and Universities.

In the spring of 2018, the Nicaraguan government began cracking down on its own citizens for peacefully protesting a plan to cut pension benefits. Since then hundreds have been killed, thousands injured and many have disappeared or been arrested at the hands of the Ortega regime. With the UCA on the frontlines of the violence and personally receiving death threats, Father Chepe has worked tirelessly to protect his students while continuing to champion the rights of the poor and marginalized.

Seattle University has a longstanding and special relationship with the UCA, which was formalized in an agreement signed in 2014. During his visit this month, Father Chepe and SU President Stephen Sundborg, S.J., signed a renewed memorandum of understanding to further strengthen the bond shared by their respective institutions.

Cosgrove spoke of that partnership and the call to support the UCA in these difficult times as she introduced Father Chepe, saying, “He’s not alone. We’re here. With him.”

In his talk on June 6, Father Chepe provided a firsthand account of the government’s repression, calling it “the worst crisis that the UCA has suffered…and one of the worst crises the country has suffered in its history.”

For the past year, the university has been delivering a number of courses online while placing some of its students at other Jesuit institutions such as SU. Father Chepe expressed “deep gratitude to Seattle University…and all the people who have opened their hearts to the five students from the UCA who are studying here. Seattle University is a university that knows how to stand in solidarity.” He specifically thanked President Stephen Sundborg, S.J., Coordinator of the Central America Initiative Serena Cosgrove and Special Assistant to the Provost for Global Engagement Joe Orlando.

Father Chepe also spoke of his friendships with many of the Jesuits who were murdered in El Salvador in 1989 and the impact the tragedy has had on his life and ministry. “From this fateful event…I have drawn lessons that guide my work at the UCA in Nicaragua.” One of those lessons, he said, is that “the people who seek the truth are targeted…and assassinated,” but that it is critical to “Be faithful to the gospel and not abandon the cause of the poor…When we make a serious commitment, (we must) see it through until the end.”

Another lesson, he noted, is that “Education is not intended just to prepare someone for success, prestige, competition; it prepares you to see the best way to create a more just society.”

Last month, Father Chepe was honored with the Martin Diskin Memorial Lectureship, which was given by the Latin American Studies Association/Oxfam America in recognition of his commitment to activism and scholarship.