A card game that Luke Green helped create is now available commercially. "Helionox: The Last Sunset" is a science-fiction card game set in the distant future.

"The idea for Helionox happened over a campfire about three years ago," says Green, director of the Office of Fellowships. "My friends and I are longtime science fiction fans and we had been playing board and card games for years. We wanted to work on something creative together, so a card game seemed like the obvious choice." 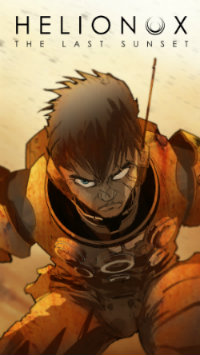 There was one small hitch. Neither Green nor his friends had any experience designing a card game. But that didn't stop them. They set about developing a game that they would want to play themselves.

"We had to teach ourselves every aspect of game creation on the fly," says Green, whose role was creating the art and overall visual design for the 200+ cards in the game. "This was a daunting prospect," he says, "given that I had no formal art training and very little knowledge about digital design, printing or game production."

Helionox is a "deck-building" game, which Green explains means that players use their starting hand to purchase increasingly powerful cards from a market. Each player also has a character that they move to various locations throughout the solar system, to solve problems, gain abilities and score "influence" points. The player with the most influence at the end of the game wins.

"We liked the idea of a future setting, during a time when humans had settled the solar system. But we also were intrigued by the question of what an advanced civilization would look like if it were in a state of decline. While players don't need to know the entire backstory to play the game, this was the aspect that I, personally, found the most intriguing."

Green and his friends Kickstarted the nearly complete game in July and have been working with a publisher in Denver to get the game produced and distributed. "We're nearly sold out of our original print run and are at stores in the U.S., Canada and Europe," he says.

Helionox has also been well-received by critics including a reviewer who goes by the name of "Rahdo" and an online magazine in Denmark.

"It has been an incredible experience seeing this project become a reality and knowing that we've made something that other people, all over the world, can enjoy with their families and friends."

Visit http://zeroicgames.com/ to learn more about "Helionox: The Last Sunset."