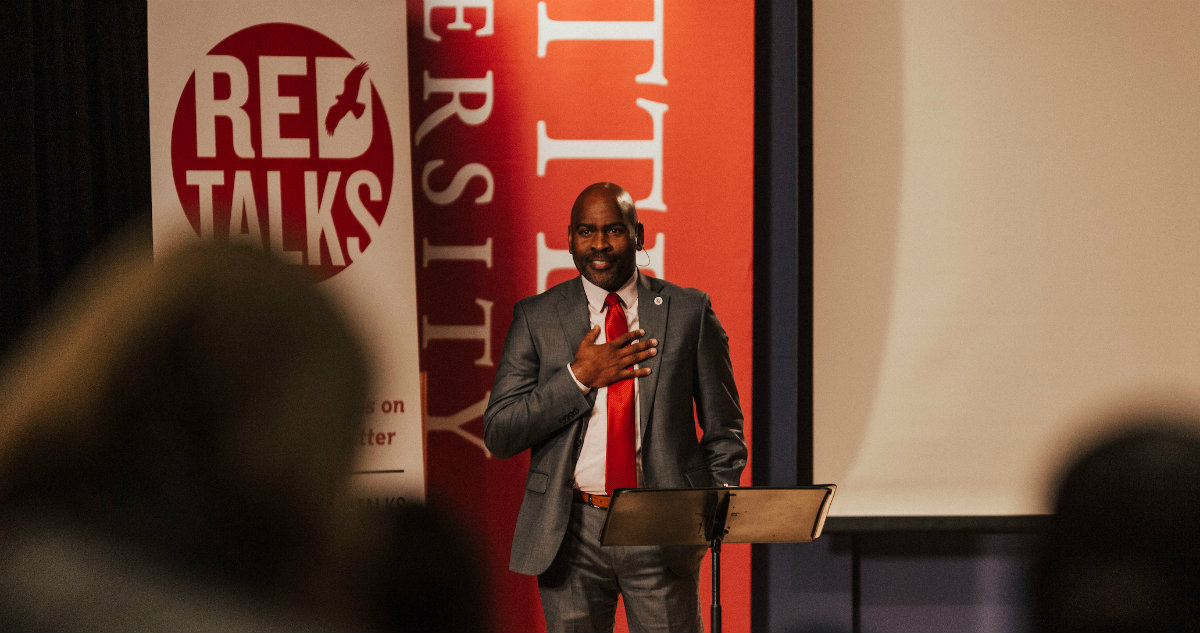 Alvin Sturdivant kicks off Red Talks for 2019-2020 by sharing his story and discussing black men and higher education.

Red Talks kicked off its second season on Tuesday, Oct. 29, with a talk by Vice President for Student Development Alvin Sturdivant.

Led by the Office of Diversity and Inclusion in partnership with the Office of the Provost, Red Talks: Uncommon Voices on Topics that Matter is a quarterly speaker series featuring leading academic voices on a range of topics across disciplines on matters relevant to diversity, equity and inclusion.

Sturdivant’s talk, “I Am Enough: Resilience in a World That Says You Don’t Matter,” touched on the unlikely journey he took to becoming a leader in higher education. He credited his grandmother, by whom he was raised, with bracing him for the struggles that awaited him. “As a six-year-old boy my grandmother sat me down and explained to me that much of my life as a black man would be about survival” and “that I would never have the ability to be invisible or to blend.”

But just as importantly, Sturdivant’s grandmother validated his worth and set his sights on the possibilities that lay before him. “She drew my attention to the differences that made me unique and special. She told me every day for 21 years that I was beautiful, intelligent, loved and that I would always, always be enough. And eventually I started to believe her, and I’ve lived my life accordingly.

“When the world was attempting to narrowly define my existence through its limited expectations, my grandmother reminded me of my ancestral inheritance continuously and that I could do and be whatever I wanted.”

From an early age, Sturdivant shared, nicknamed him “Reverend Teacher,” and he took it to heart as a point of pride and motivation to make something of himself. He would go on to earn an Ed.D. in Educational Leadership and Policy Studies from the University of Vermont.

But his was, and continues to be, a path seldom taken. “There are more black men behind prison walls than there are inhabiting the walls of higher education,” he said. Reading from a letter to young black men that was adapted from something he wrote while completing his doctoral dissertation, Sturdivant invited attendees to “think about the ways in which you engage with black men and the ways in which you have the capacity to transform (their) lives.”

Sturdivant holds adjunct appointments in the College of Arts and Sciences, teaching courses associated with multiculturalism, the deconstruction of hate in the U.S. and abroad, and race and ethnicity.

Under his leadership, Student Development has recently joined forces with Academic Affairs to strengthen and integrate student learning and engagement at SU.