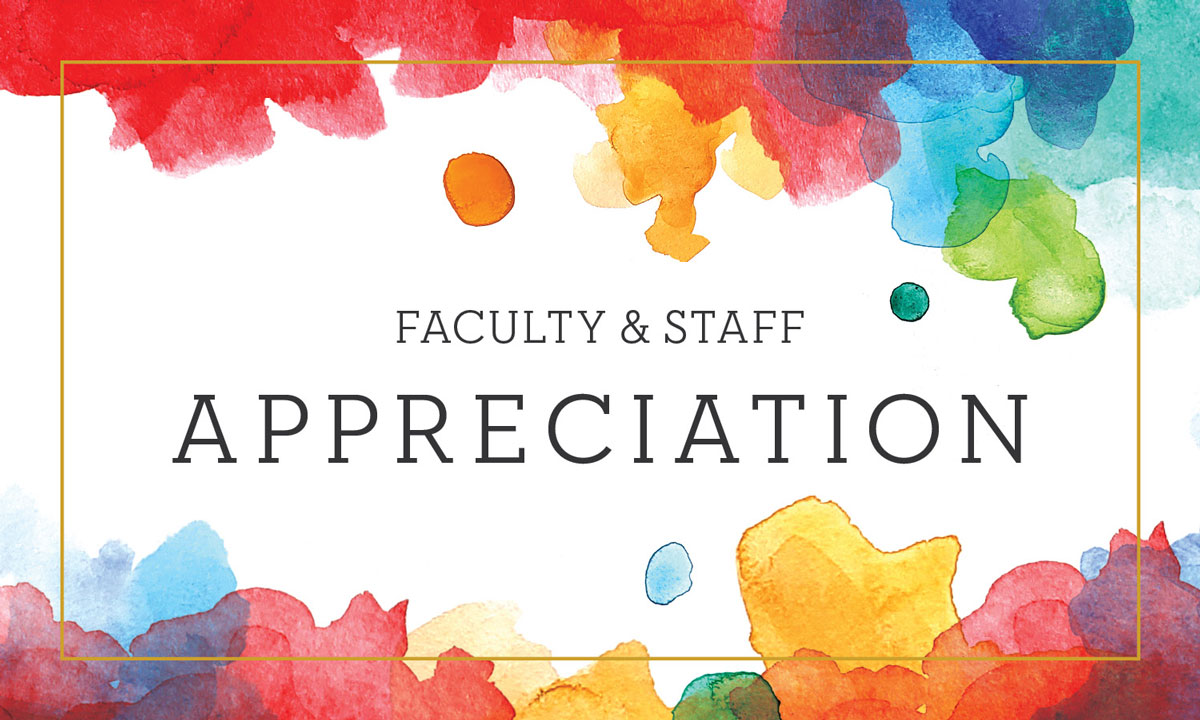 Margaret Moore and Jen Tilghman-Havens were announced as recipients of the 2019 Exemplary Staff Awards at Seattle University’s Faculty and Staff Appreciation Event on May 16.

Also honored at the event was Paulette Kidder, professor of philosophy and director of the Matteo Ricci Institute, who President Stephen Sundborg, S.J., previously announced, as the 2019 recipient of James B. McGoldrick, S.J., Fellowship, the most prestigious award the university confers on a faculty member.

Moore, senior administrative assistant in the Arrupe Jesuit Residence, received the Lee Thurber Award, which is named for a longtime staff person who worked in the President’s Office. Tilghman-Havens, director of the Center for Jesuit Education, received the Excellence in Leadership award.

Presenting the award to Moore, Executive Vice President Tim Leary said, “She is described as someone who truly engages with people in the spirit of collaboration, collegiality, and who lives out the Jesuit mission.”

Saying she was humbled by the award, Moore laughingly allowed that her work at the Jesuit residence is “a bit like herding cats” and sometimes involves handling some “oddball things.” She shared a story about how the men’s basketball team wanted to give the president a pair of red basketball shoes and needed to know what size he was. So, after consulting the Arrupe house manager, Moore went to Father Sundborg’s closet and got the information. “I don’t remember now what the size is,” Moore said, turning to the president who was seated nearby on stage, “but, Father, I sure hope those basketball shoes fit.”

Moore thanked Rector Tom Lucas, S.J., and House Manager Melissa Connolley as well as the “Jesuit community for being who you are, individually and collectively” and “the wider Seattle University community, for doing what you do every day, which makes this a great place to work.”

Leary introduced Tilghman-Havens by sharing words from some of her nominators. “Known for her excellent facilitation skills, her contagious energy and her clear passion for the university’s mission, Jen invites people to become the best versions of themselves…She is warm, kind, approachable, a gracious and insightful leader who models inclusivity, wisdom and good humor, yet never avoiding the honest and the difficult.”

Tilghman-Havens said, “I feel really honored by this award, and I feel like I don’t do a thing at this university by myself…(S)o many people here are doing such good mission-oriented work, often in hidden ways. And so I feel really humbled to receive this award because so many of you should and hopefully will be receiving it.”

Tilghman-Havens also gave a special shout-out to Women in Mission, “which has been such a powerful group for me to be of and experience support from,” and concluded by saying, “I feel so grateful to be at a university where so many of you are not only my colleagues—you are my dear friends. We don’t just share work together; we share life together.”

Introducing Professor Kidder as the recipient of the McGoldrick Fellowship, Provost Shane P. Martin echoed the words Father Sundborg shared in his announcement, saying, “Dr. Kidder’s considerable contributions as a teacher-scholar are rivaled by her incredible service to the university. Much as Father McGoldrick guided our institution through times of transition and challenge, Dr. Kidder has, time and again, answered the call when our university has needed her most. After having served as associate dean and interim dean of the College of Arts and Sciences, she was appointed interim dean of Matteo Ricci in 2016 and, with a steadying hand, she led the college through its transition to the institute that she now directs.”

Kidder said, “I’d like to thank my colleagues (who have) supported me these last 30 years, and particularly these last three years in Matteo Ricci.” She also remembered three past recipients of the McGoldrick Fellowship, Sister Rosaleen Trainor, Madeline Lovell and George Kunz, who passed away this month.