Finding the Sacred in the Everyday

It's no small task when you decide to amplify St. Ignatius Loyola's 16th century examination of conscience to make it inviting, relevant and meaningful to a contemporary lay audience.

Since the early 1990s, William Watson, S.J., has been on that winding path. Motivated by a daily spiritual discipline that proved therapeutic in his own life, Father Watson chose to devote his energies to bringing tools for discernment and reflection to a wider audience. Today, he's an evangelist among students, faculty, administrators and chaplains from other faith traditions, connecting them with the spiritual legacy of St. Ignatius, the founder of the Jesuit order. 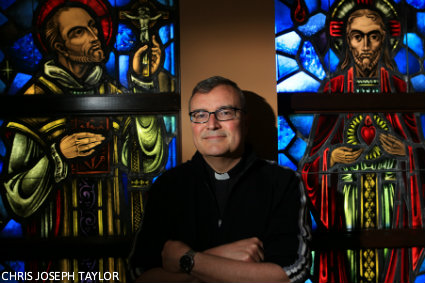 Early on, Fr. Watson, left, decided he wanted to build an Ignatian-based retreat program that might guide religious faithful-Catholics and Christians of all ages-around the world.  He served as director of retreats for Georgetown University before he was named vice president for mission at Gonzaga University in 1999. It wasn't until later, though, that he called his program Sacred Stories.

Fr. Watson concentrated on how St. Ignatius developed his Spiritual Exercises with prayers, contemplation and meditations for greater discernment, moral wisdom and, ultimately, deep personal transformation. He reread the saint's autobiography to explore not just the spiritual but the psychological for a closer examination of conscience.

Remarkably, the many life crises Ignatius experienced in the 16th century-narcissism, gambling addiction, aggression and more-make him relevant today, according to Fr. Watson. Learning to recognize who you are, he says, is central to understanding the prayer exercises, which Watson adapted with modern-day approaches for conquering fear, anxiety, grief, sins, addictions and destructive compulsions.

Fr. Watson accumulated thousands of pages of feedback from contemporary Catholic and interfaith audiences on how a 21st-century take on the Ignatian Spiritual Exercises might transform a person's dysfunctional patterns into grace and healing.

In his early 50s he completed his doctorate and returned to SU in 2009 as a resident chaplain at Campion Hall (he previously served at SU as liturgy and music director in 1978.) Last year Watson launched the nonprofit Sacred Story Institute (SSI).

Hundreds of spiritual directors and parishioners-including SU students and alumni-throughout the Seattle Archdiocese have been participating in SSI's research project to help create a pastoral resource of Fr. Watson's Sacred Story method, recently published in the book, Forty Weeks: An Ignatian Path to Christ with Sacred Story Prayer. Participants in the Sacred Story program spend one to two 15-minute sessions daily devoted to awakening one's conscience and consciousness through prayer.

Husband, father and engineer Bret Taylor was raised in Evangelical, Fundamentalist and Gospel churches before he became a Catholic nearly seven years ago. He was among 25 parishioners from Our Lady of the Lake in Seattle who signed on to take part in the 10-week Sacred Story prayer exercises featured in Fr. Watson's book, Sacred Story: An Ignatian Examen for the Third Millennium.

"Sacred Story turned out to be very palatable to a new Catholic with roots on the Protestant end of Christianity," says Taylor. "Early on Sacred Story seemed a two-person effort-myself and God. It was a struggle every single day to read and reread the teaching and to pray and think and attempt to internalize the story."

Julie MacAller says she was motivated to participate in the Ignatian prayer exercises because of a negative impression of it and to have a better relationship with God. MacAller is a 2013 graduate of the Master of Arts in Transforming Spirituality program in the School of Theology and Ministry.

While taking part in the prayer exercises was mostly solo, MacAller appreciated the monthly group meetings with Fr. Watson at her parish, Holy Family in Kirkland.

"Those meetings were very helpful because I heard where others were struggling," says MacAller, a recent grad of the master's degree in transforming spirituality from the School of Theology and Ministry. "I also had a good friend who was part of the program and we supported each other through our journeys."

It wasn't always easy, though.

"I was constantly anxious at the beginning about whether I was doing them 'right,' which made them more difficult than they needed to be. Beyond that, I found the basic discipline of prayer periods easy," she says.

Jesuit spirituality has always captivated Tom Schutte, coordinator of Campus Ministry and chair of the religion department at O'Dea High School in Seattle.

"Since my high school days, the Ignatian path has helped me gain intimacy with my faith in Christ and shown me a deeply human route to connect with God," he says.

Jesuit educated at high school and at Boston College where he earned a master's degree, Schutte says both settings were influential for his exposure to Ignatian practices.

His parish, Holy Rosary in Edmonds, offered him the opportunity to work with Sacred Story Institute resources for the individual daily retreat experience.

The dedication to mindful Ignatian prayer has been the most valuable aspect for Schutte.

"With daily dedication to the program, the gentle mercy of God will awaken you to a whole new way to live well. … People are hungry for an experience of God's sacred presence, something that is deep, real, personal and living," he explains. "For me, the Sacred Story Institute program fed this hunger in a unique and special way. It has been like a spiritual surgery that opened up troubled areas and infused new healing and human vitality into my life."

Forty Weeks: An Ignatian Path to Christ with Sacred Story Prayer, Fr. Watson's latest book in the Sacred Story series, is a pastoral resource based on the feedback of those who've tried the weeks long program.

No matter who goes through the experience, Fr. Watson says it makes you look at what might be blocking your surrender to God.

"We experience sickness, disease, sadness and emotional dysfunction of all kinds when we turn from God to satisfy the self," he says. "God is the one who can repair our hearts and get us back on the road of integrated healing."

Learn more about the Sacred Story Institute at http://sacredstory.net/.