Civility and Reclaiming the Idea of America 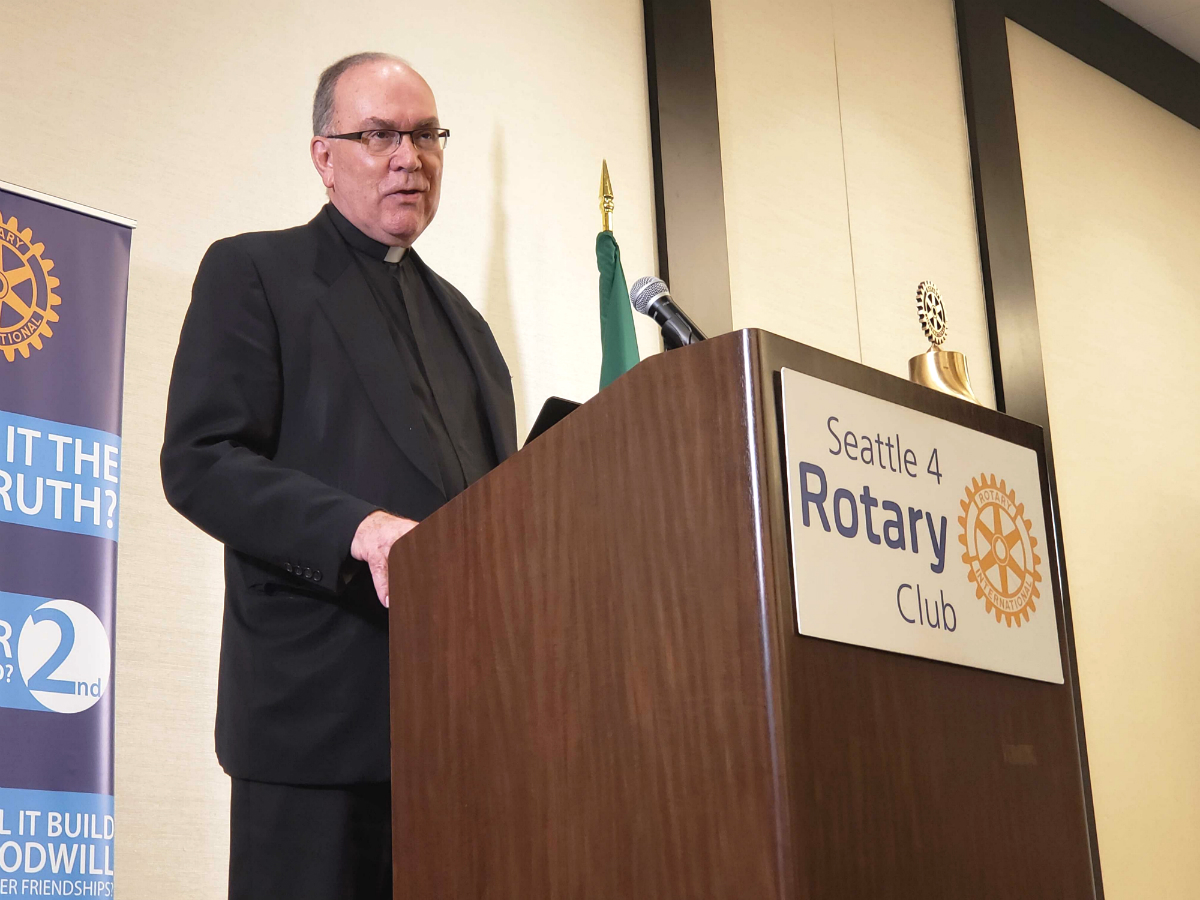 President Stephen V. Sundborg, S.J., received a standing ovation after he gave the inaugural keynote talk at a Seattle 4 Rotary meeting in July that launched the club's emphasis this year on civic engagement and civil discourse.

Heading into 2020 local and national elections amid a lot of overheated rhetoric, the subject of civil discourse is especially pertinent. In his speech, Father Steve laid out the relationship between civility and our struggle to define America.

“Part of my thesis today is that we have a fractured identity as a nation and hence our hostility and incivility, because the very idea of America is fractured, not commonly held, or at least badly needs to be updated, especially by incorporating those whom the idea claims to include in the story of America but who have not been included,” he said.

Here are excerpts from his address:

The Idea of America: We the People

“So what is America? I love the statement of a famous political scientist of the last century, Carl Friedrich: ‘To be an American is an ideal, while to be a Frenchman is a fact.’ Our country is constituted not because we live in the same space or have a common ancestry among us; rather, it is constituted by an ideal, an idea. We are who we are as Americans because we are striving, struggling, fighting and disagreeing with one another, in pursuit of an idea. The realization of that idea has not been settled; our history is the story of that idea, as much its failure of attainment as its fulfillment. This makes us unique as a nation. It is our glory, our strength, but it also makes us precarious as a nation because if it binds us together, that idea must be known and retold and renewed, and what has been left out of the idea must become part of it.”

“We are constituted less by the idea that the whole Constitution, with all its provisions and structures of government, represents and more by just its first three words, ‘We the People…’ The idea of America is that we are a people who belong to one another, depend on one another, know one another, pull for one another and even love one another. The idea of America is a relationship among us, a kinship, a connected people agreeing on our equality as persons and citizens and agreeing to equally share in the governing of ourselves, but able to disagree about all of the issues within these fundamental agreements. “

“The idea is fractured when some of the people have been, or are still, left out of this ‘We’. “… The issue of America is, fundamentally, do we belong to one another, all of us? We are fighting over who belongs, but we are in a period of intense pressure, friction, heat because of the challenge to include all the people in ‘We the People.’ Our history is a glorious one and a shameful one. We need to know our true history and write its continuation with an updated story of the new people we now are.”

The Role of Civility

“There is a challenge to civility among us, which is caused fundamentally by not wanting or even being able to know one another. A University of Michigan study showed, for instance, that college students today score 40 percent lower than those in the 1970s in their ability to understand what another person is feeling and that the biggest drop has occurred in the years since 2000. This is a drop in empathy, being able to enter into the experience and feelings of another in order to appreciate how they see the world, in our case, the nation.”

“If this is the idea of America, then what is the role of civility in reclaiming this idea? Civility can be seen as a matter of etiquette, good manners or politeness . . . I like the definition of civility as ‘claiming and caring for one’s identity, needs and beliefs without degrading someone else’s in the process’ (Spath & Dahke).

“What we need as citizens is conversation, not unbudging debate between us when we are together or denigration of one another when we are apart. These attitudes are so deeply grooved in our ideology that we cannot listen to and appreciate the experience of others. Civility is not politeness; it is the empathetic conversation of citizens who care for one another and want to know one another’s experience, with no one being left out of the conversation.”

“Civility is this agreement and disagreement of citizens in conversation, speaking two-footed truth to one another while agreeing on how disagreements are dealt with, resolved in our democracy. It is because we believe that the idea of America is worth it, that the nation is the fight itself, not free of the fight. A false civility is one that appeals to propriety in order to veil or suppress listening to the voices of others with empathy.”

“ … It is this kind of civility of citizens in conversation that alone has the chance of reclaiming the idea of America itself and holding the nation together. We need this civility because America is not a fact—it is an idea which alone binds it together as a nation.”