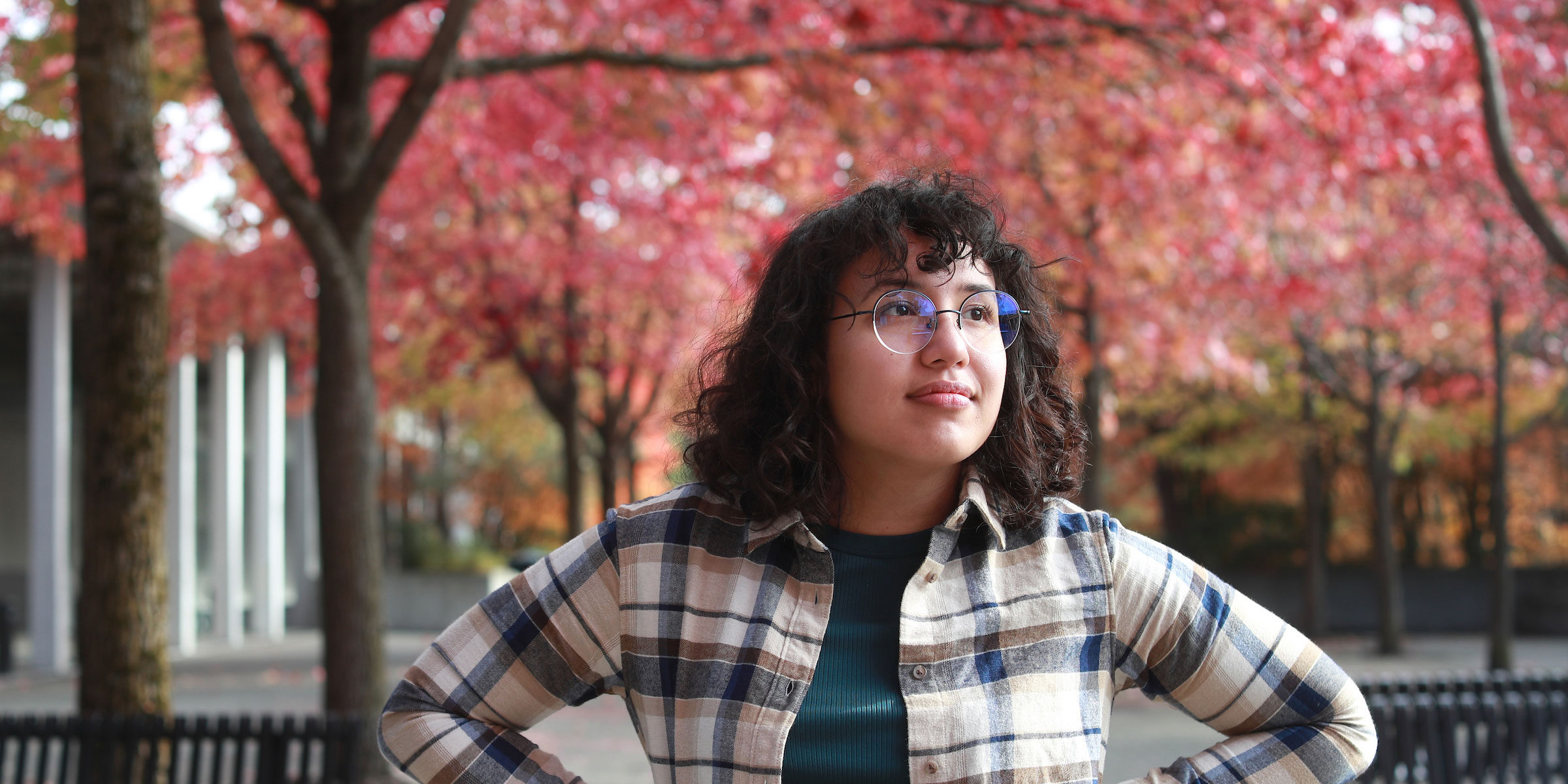 While at Seattle U, Nancy Mariano, ’18, looked like she had it all together. She is one of those people who has given that impression all her life. “I was born in 45 minutes,” she says, with a laugh. “I wanted to do life.”

Mariano is a first-generation college student, meaning that neither of her parents have an education beyond high school. Her parents couldn’t help her navigate or pay for college, but they fully encouraged her higher education pursuits. So, Mariano took it upon herself to research colleges, pay the application fees with money she earned from McDonald’s and apply for scholarships and financial aid on her own.

At Seattle U, she majored in computer science and minored in math. She received a Costco Scholarship for underrepresented minorities and the Brotherton Family Scholarship recognizing students dedicated to their fields.

Her college experience looked like a success. She joined the Women in Technology Club, through which she raised money to attend a national technology conference, and secured two impressive technology internships.

“As a first-generation student, my parents raised me to start where they were finishing. It’s really meaningful to me because I achieved my parents’ dream.” —Nancy Mariano, ‘18

Yet, Mariano struggled as a first-generation student to decode certain aspects of college life. She worked multiple jobs, but found the cost of college to be a persistent challenge. In four years, she never figured out how to get the most from financial aid options. It was only after graduating with considerable debt and moving back in with her parents that she learned she had left money on the table — money she could have accessed if she had only asked.

“We were private about not being able to afford things growing up. I was taught not to ask for help,” Mariano says. “I could have really used a mentor.”

Recognizing the unique challenges of students like Mariano, Seattle University launched The Outreach Center in 2017. The center acts as the university’s hub to address the needs of first generation students and veterans. Nationally, 60 percent of veterans enrolled in colleges and universities are first-generation, according to Gretchenrae Campera, ’08, assistant director of Student Success and Outreach.

“It’s our opportunity to tell first-generation students it’s okay to stumble. You’ve got people to help you navigate,” she says.

Intersecting identities add to the multi-dimension of many first-generation students, explaining why institutions, including Seattle University, have multiple approaches for connecting with them.

When Chung-Jen (C.J.) Chen, ’20, transferred here from Tacoma Community College, he became a Fostering Scholar, a Seattle U program that provides wrap-around support for Washington state foster children. Chen is also an immigrant who came to the United States with his family from Taiwan when he was 10. In addition to these identities, Chen is a first-generation student whose mother’s highest education was high school and whose father’s was elementary school. 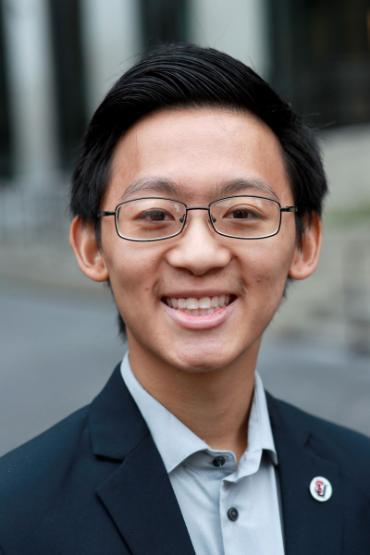 When Chen arrived at Seattle U, he says, “I had no idea what I was doing.” College was “very different from how it is portrayed on TV shows.” By chance, he overheard a conversation between two students about accounting and thought it would suit his personality better than what he had declared.

He changed his major and is doing well in the Albers School of Business and Economics. The Fostering Scholars program has helped him with budgeting, self-care and developing a resume. His campus job at the Center for Student Involvement has become so much more. There Chen, works as a mentor to other first-generation students through The Outreach Center and serves as a Student Involvement Ambassador. “It feels like family,” he says.

“I’m so much more hopeful for my future than ever,” Chen says. “I have so many options ahead of me.”

For the past 10 years, Seattle University’s first-generation student population has remained steady at 15 to 17 percent of the total student body, according to SU’s office of Institutional Research (IR). First-generation students are defined as those whose parents’ highest level of education is a high school diploma, in accordance with the Department of Education’s National Center for Education Statistics (NCES) definition.

A 2014 NCES report shows that 34 percent of undergraduates in the U.S. have parents who have never gone to college. First-generation students are more inclined to attend public institutions by a rate of 76 percent, according to a 2017 NCES study.

The Seattle University School of Law has the highest percentage of first-generation students of any of the university’s schools and colleges. Each year since the 2012–13 academic year, more than one-fifth of all law students have identified as first generation.

Many of those students enroll through the law school’s Access Admission’s Program, a seven-week summer course offering an introduction to law school culture, coursework and test preparation for students whose numerical indicators (LSAT scores and GPAs) fall below the typical student profile, says Gerald Heppler, director of admission for the law school. 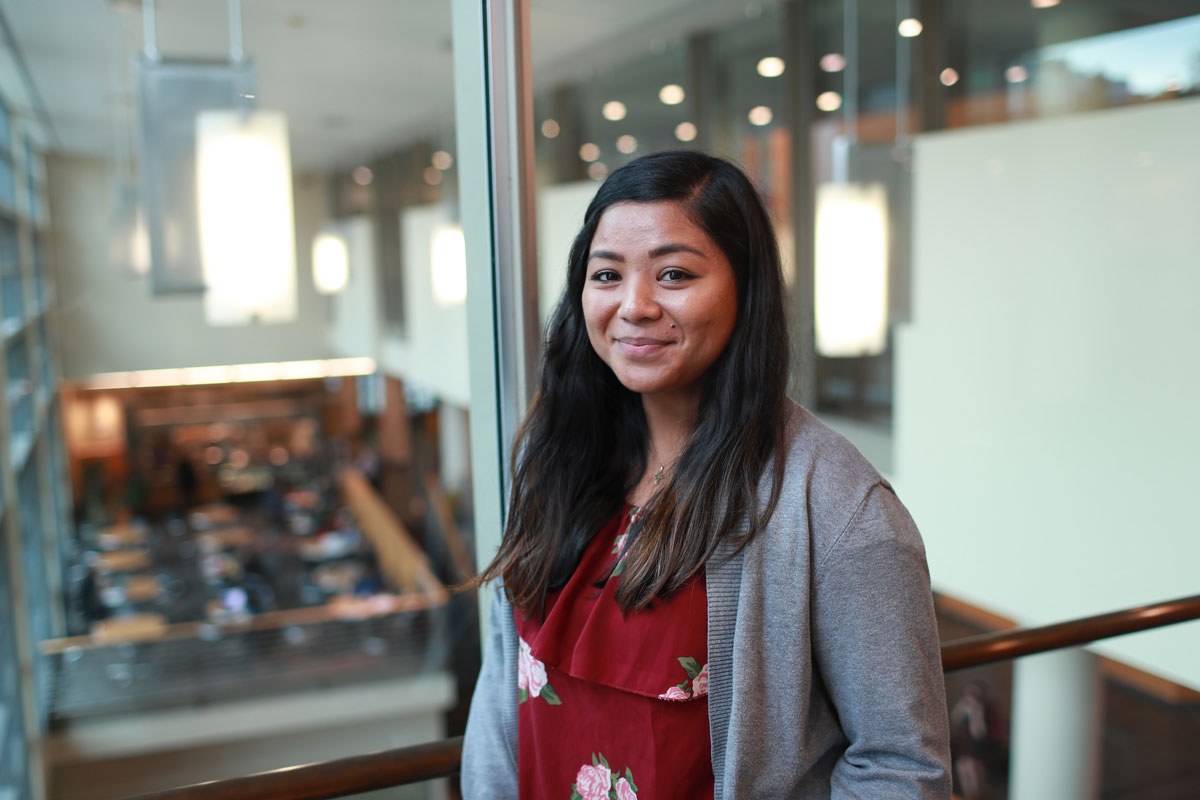 First-year law student Jeaqualyn Borgonia, ’21, didn’t know any attorneys growing up. Her parents, neither of whom advanced beyond high school, are from Guam, where her dad served in the military.

While studying political science at St. Martin’s University, Borgonia interned for the Washington state legislature where she became convinced that policy was the way to social change and decided to become a lawyer. Entering law school, she “felt very fortunate to have the option” of the Access Admission’s Program “because without that I probably would have been pretty lost.”

“My parents always valued education. They never went to high school themselves. They used a metaphor of education by comparing literacy to living in bright daylight compared to illiteracy as living in the dark.”

As first-generation students tend to be older than traditional students, it is common for them to be managing adult responsibilities.

At age 34, Abdul Diriye, ’19, is the father of five young children. He is a Somali refugee who immigrated to Kenya in 1990 and to the United States in 2000 before settling in West Seattle in 2002 for his senior year of high school.

Diriye didn’t follow a traditional path to college. Impelled to help the Somali community, he immersed himself, often volunteering at public health clinics translating for Somalis who didn’t know the language. He got a job where he continues working today for a rental car company near the airport, married and started his family.

A decade passed. But college was never far from his mind.

“I knew all the time I could do better once I could focus on my education,” he says. “My parents always valued education. They never went to high school themselves. They used a metaphor of education by comparing literacy to living in bright daylight compared to illiteracy as living in the dark.”

Diriye transferred to Seattle University from South Seattle College in 2017 to study diagnostic ultrasound in the College of Nursing. He became an Alfie Scholar, a Seattle U scholarship program for transfer students. Not only did the Alfie Scholarship program provide financial support but “they are like an immediate family” to him. He makes the Dean’s list and is a member of the Tau Sigma Honor Society.

Still, he says the biggest challenge is knowing where to find information. “I compare that to the native students. I found they knew what they were doing. To me it is a struggle. But with Alfie’s support, I came through tough times.”

As the first in his family to attend college, Diriye feels like he carries a great weight. One mistake could have grave consequences.

“I believe every first-generation will tell you that,” he says. “If you don’t pass a class, you feel that your future is threatened. None of my family went before so I am the lead person. I don’t want my family to lose hope. It’s a big responsibility.”

When Mariano graduated last spring, that weight Diriye describes was lifted and replaced by a new feeling, one Mariano can’t quite express.

By graduating from college, she realized a family dream. “[My parents] worked really hard to advance through their companies,” Mariano says. “But there’s a barrier when you don’t have a degree.”

Now the dream is coming full-circle. Mariano’s dad, who started in the mailroom at Microsoft, manages a data center that uses F5 products from the company where Mariano now works.

“As a first-generation student, my parents raised me to start where they were finishing,” Mariano says. “It’s really meaningful to me because I achieved my parents’ dream. I still haven’t taken it all in."

Learn more about programs for first-generation students and student veterans at www.seattleu.edu/student-outreach.

Alfie Scholars: A program that provides financial and academic support for transfer students from two-year colleges. Learn more at www.alfiescholars.org.