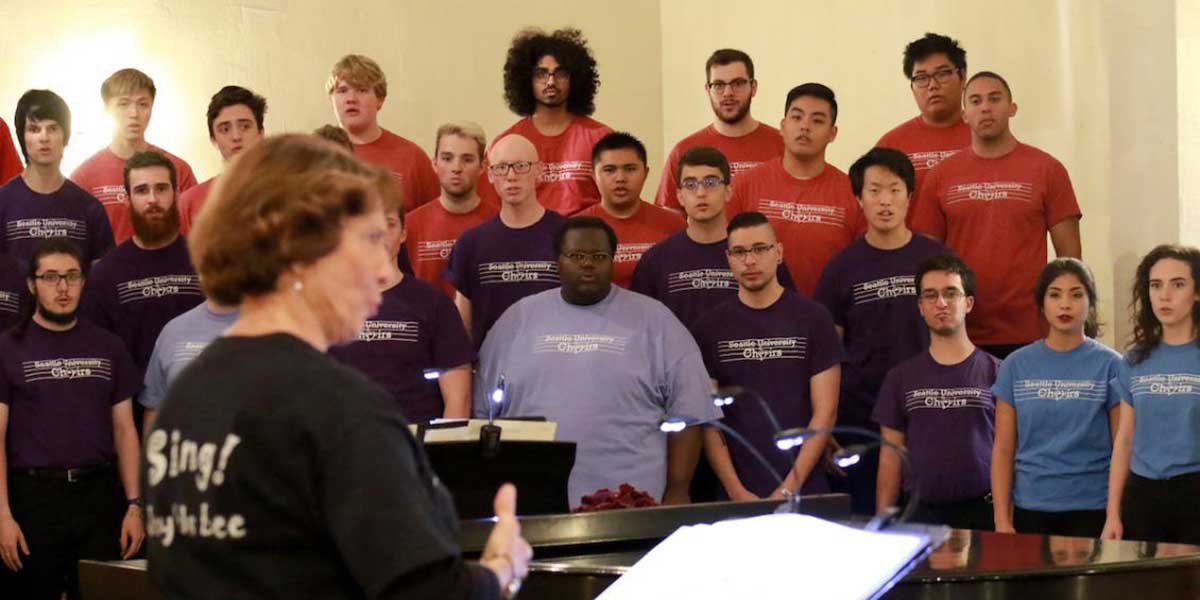 For years, they came to her like unmolded clay. And, by the time they were ready to leave, Joy Sherman, known to most as “Doc,” had formed them into more than fine singers—she welcomed them into an extended choir family.

This year many in that family returned to bid Sherman farewell as she retires after 27 years as director of Seattle University Choirs.

Maddie Cary, ’12, an alto who sang with the choir throughout her college career, is one of 14 alumni singers who rejoined the choir this academic year. Many others returned for concerts.

“Sometimes I wonder if Doc fully understands the deep impact she’s had on so many students’ lives, including my own,” says Cary, now vice president of Client Services at Point It. “Doc has helped shape me into being a better leader. She also changed my relationship with music. Doc helped me understand that you make art because it feeds not only your soul, but those of the people who get to experience you creating it.”

Sherman’s vision, discipline and sheer force of will built the university’s exceptional choral program. When Sherman arrived in 1991, the program was comprised of 35 singers in two choirs. Today the four one-credit choir courses—University Chorale, Bella Voce, Cantemus and Chamber Singers—draw 100 to 130 singers who make a four-year commitment to at least one of the groups. Sherman keeps the program on track by working 60 hours a week and requiring her singers, including faculty and staff, to adhere to high organizational standards.

Albers Professor Bill Weis, PhD, remembers being astounded by the quality of the choirs just one year after Sherman took over the bare-bones program. A lifelong singer himself, he joined the University Chorale and was equally impressed by her management style. Today, the choirs have 13 scheduled performances a year and are called upon for funerals and special events.

“I learned more about effective leadership from observing Joy and being taught and directed by her than I have from the volumes of leadership tomes that clutter my bookcase,” he says, “and from decades of working around leaders who, while effective, were simply not in the same league that Joy operated in.”

Most students arrive with no vocal training or intention to pursue a music career. Along with Assistant Director Lee Peterson, Sherman drills technique while instilling a love for music.

“Having the opportunity to sing with and under the direction of Doc has not only been a revealing experience for how I view myself musically but also how I view music overall,” says Haneia Simpson, ’20, an internal business major and alto in the University Chorale and Bella Voce.

Former opera singer Jamie Dye, ‘94, is a College of Education alum who helped train female voices during the years she sang with the university choirs.

“Joy has dedicated her life to students and music,” Dye says. “I don’t know anyone that works harder than Joy.”

Fine Arts Instructor Monica Bowen, who was drawn to join the university choirs after hearing them rehearse while she was teaching class, says Sherman’s own work ethic raises the level of her students. “I am struck by how Joy maintains discipline and authority in her classroom, but also is very loving and compassionate,” she says. “The positive environment helps to foster creative expression through music.”

What’s next for the program will be up to the director who is selected to take Sherman’s place.

Looking to her retirement, Sherman admits, “I’ve given so much to this (program), it’s going to be a huge adjustment.” True to form, she has prepared. Travel is on the horizon, as is finding a way to meld her love of teaching music with community service.

Seattle University Choirs: By the Numbers

189: Number of Seattle University Choir concerts directed by Joy Sherman.
55: Number of times the SU Choirs have performed at the Mass of the Holy Spirit, Baccalaureate Mass and Red Mass under Sherman’s direction.
35: Singers in the Choirs when Joy Sherman was hired in 1991. Today, there are more than 100.
2: Choirs when Joy started as director. Today, there are four.