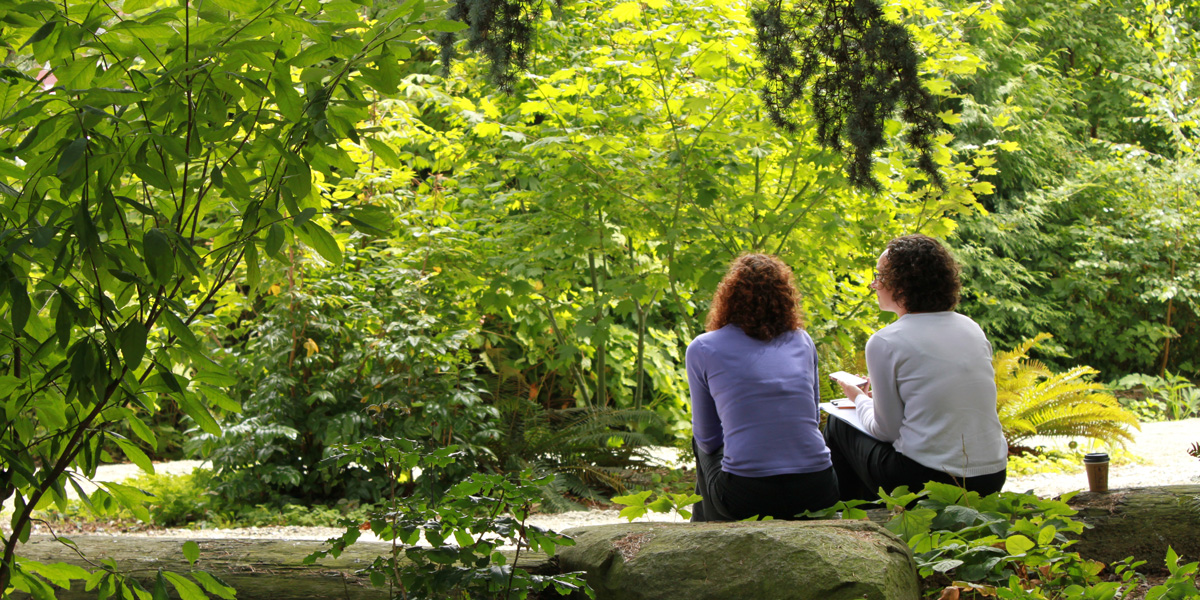 With Vi Hilbert Hall, Upper Skagit elder will be honored on north and south ends of campus

Returning to campus after a break in January, I was struck by the tall building that has sprung up on our northern edge. It seems to have claimed the skyline in that direction and changed the physical presence of Xavier Hall in its foreground. Naming helps to anchor our structures to this place and we should feel deeply honored to use the name of Vi Hilbert, the esteemed Upper Skagit elder, for this new building. It is an acknowledgement of the first peoples on whose land we reside and also the contributions that Vi Hilbert made to keep the Lushootseed language alive and spoken aloud. She was a teacher in the truest sense and to honor her name at Seattle University is right and appropriate. And, in fact, we have been honoring her name in the Vi Hilbert Ethnobotanical Garden that sits at the other end of campus, for more than 10 years now.

The Garden is a different place than the busy comings and goings at Vi Hilbert Hall. The teachings that Vi Hilbert gave us in the words, “The earth is our first teacher” and “Gifts from the Creator” are etched in the great stones that mark the Garden’s two entrances. I reflect on these words as I move through the Garden, ponder the large and the small, the seen and unseen, listen to the sounds that surround, all gifts that connect us to the people and animals and plants who walked here before us.

As I consider the things that the Garden teaches: about the complex soil food web and the tiny ephemeral bulbs that bloom in the spring and disappear from our sight, about the trees that protect and nourish other species as they grow, about the rocks, insects, birds, soil microbes, and humans, all sharing in this interconnectedness dance, I link these teachings to our stewardship of this significant site. Many hands have helped create and sustain this place, many have invested time and thoughtful energy to insure that it is preserved.

With budget constraints hampering the Grounds crew’s ability to do justice to this scared space, we are reaching out to engage other community members in the care of the Garden. To further this effort, we have started a partnership with the Washington Native Plant Society (WNPS). They are helping to steward and maintain the Vi Hilbert Ethnobotanical Garden.

WNPS is a long-established organization in our community. These folks are passionate about native plants and have a robust program of lectures, trainings, field trips, hikes; many ways to learn about and appreciate the native plants of our region.

In August of last year, a group of WNPS members came to campus for a tour of the Garden and we struck up a lively conversation about the many ways we could help each other in caring for and preserving native plants. That conversation has borne fruit in two WNPS work parties at the Garden, one in October 2017 and one in January 2018, where much needed maintenance was accomplished. Another work party is scheduled for April 2018. Their presence here on campus has brought a refreshing energy to the site and they have invited the SU community to join them in working to keep the Garden well cared-for. Watch the Campus Announcements for dates and times.

I know that Vi Hilbert would be glad that her namesake garden has extended a welcome to a broadening circle of people. She appreciated hard work and sharing knowledge.

And while I’m happy that her name is gracing two places on the campus, I feel her spirit in the Garden.

Janice Murphy is integrated pest management coordinator and a regular contributor to The Commons.