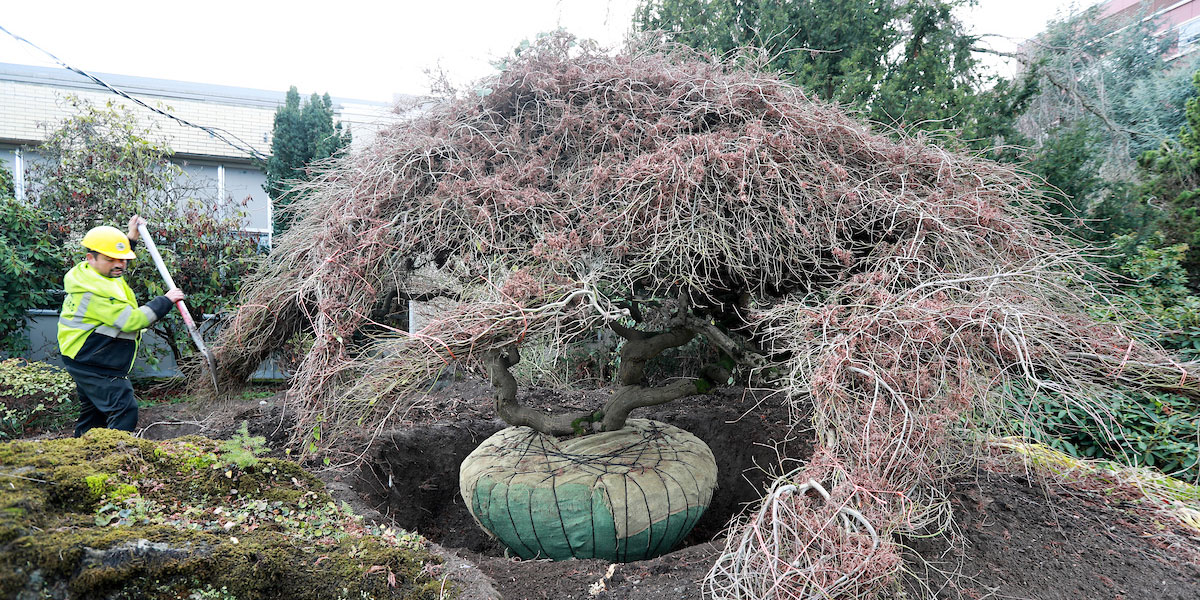 Notable campus trees are moved to the Union Green

In preparation for the construction of the Center for Science and Innovation (CSI), eight trees and 18 boulders connected to the Kubota legacy on campus were transplanted this week. The trees and boulders were moved from their longtime location outside the University Services Building to a temporary nursery on the south end of the Union Green. They will camp out there until they return to the new landscape outside the completed CSI.

For the transplant, SU’s Grounds Department contracted with Big Trees, Inc., the same company that just moved trees at Seattle Center to make way for the KeyArena reconstruction.

Watching the operation from the nearby Marion walkway, Grounds and Landscaping Manager Shannon Britton said the relocation was going smoothly. She noted that the Union Green provided an ideal temporary home for the trees due to its rich soil, and the location’s proximity to the University Services Building helped simplify the relocation process. A generous helping of mulch will be added to the relocated trees’ root balls to help them get situated and flourish in their temporary digs.

Britton has learned about the history of some of SU’s trees from Al Kubota, grandson of Fujitaro Kubota who was a gardener at SU in the 1960s. “Al shared that the large boulder and lace leaf on the north side of the USVC building are special because they were donated to Kubota from a residential landscape and then moved from Kubota’s private holding nursery to campus. He has donated at least one other lace leaf maple by this method—the maple that resides at Hunthausen and is part of the Japanese Memorial.”

Ground is expected to be broken this spring for the Center for Service and Innovation. As with the trees and boulders, the University Services Building’s human denizens are being moved to new quarters throughout campus.

Scheduled to open in 2020, the five-story, 109,000-square foot CSI building will house Seattle U’s biology, chemistry and computer science programs and feature new research and teaching labs, a Computer Science Project Center and maker space. The existing Bannan Engineering and Science buildings—six stories totaling about 162,000 square feet—will be renovated and house engineering, math and physics. The university is raising $100 million in private donations to pay for most of the project.

Visit Grounds and Landscaping to learn more about the notable trees on our campus and tree salvage for more photos.