An Iconic Church Leader and Seattle U 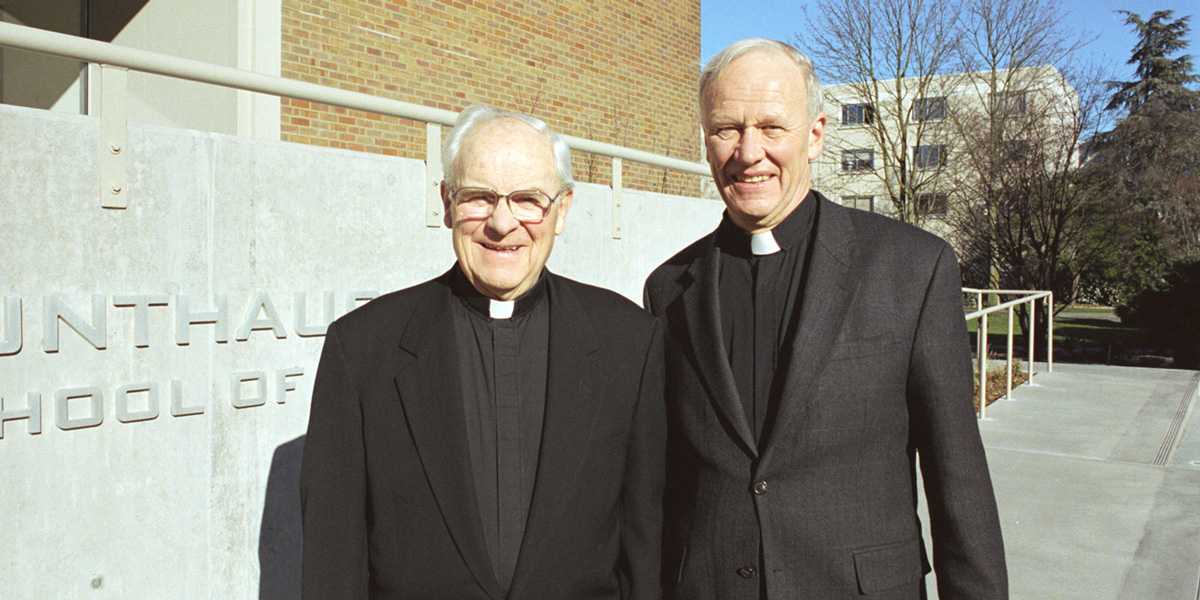 Retired Archbishop Raymond Hunthausen, left, with Patrick Howell, S.J., then dean of the School of Theology and Ministry, at the dedication of Hunthausen Hall in 2004.

In Archbishop Raymond Hunthausen, the university had a great friend

Many in the Seattle community and beyond are mourning Archbishop Emeritus Raymond G. Hunthausen, who passed away July 22 at the age of 96. As President Stephen Sundborg, S.J., wrote in a letter to members of the Seattle U community, the archbishop left an enduring imprint on the university:

“(Archbishop Hunthausen) modeled a vision for the Church that long after his retirement in 1991 has continued to resonate with and inspire our educational mission as a Catholic and Jesuit institution. He was also an active partner in our work.”

Patrick Howell, S.J., of the Institute for Catholic Thought and Culture is quite familiar with that work. Archbishop Hunthausen “played a major role at Seattle University in the foundation of the Institute for Theological Studies (ITS), the predecessor of the School of Theology and Ministry,” says Father Howell.

The archbishop, Father Howell recounts, worked with then-SU President Bill Sullivan, S.J. to form a “joint venture” in the ITS for training Catholic lay men and women for pastoral ministry—for parishes, hospital chaplaincies and social ministries of the Church. “The program built on existing pastoral leadership programs already offered by Seattle University, but expanded to include a Masters in Divinity (the same degree that priests receive) and a Masters in Transforming Spirituality.”

As the ITS developed and came into its own, religious leaders took note. And not just Catholics, but Protestants, too. In time, Protestant leaders were sending their own seminarians and laypersons to SU, and the institute, Father Howell says, was recognized not only for “the outstanding education Catholic lay leaders were receiving,” but also “in effect, it became the leading Protestant seminary in Greater Seattle.” Crucial to those early beginnings were Fr. Mike Raschko and Fr. James Eblen, both archdiocesan priests who had their doctorates. Along with many others, they inspired the programs and students with the vision of shared ministry, articulated by Archbishop Hunthausen.

The institute’s commitment to ecumenism, Howell says, was largely attributable to Archbishop Hunthausen and the warm relationships he shared with leaders of other Christian denominations. As one of the youngest bishops to participate in the Second Vatican Council, Hunthausen took to heart the Church’s new direction, which included a stronger commitment to interreligious dialogue and collaboration.

“From his earliest engagement as a young bishop at the Second Vatican Council,” says Father Howell, “(Archbishop Hunthausen) was imbued with its spirit and convinced that the future of the Church lay in shared ministry, mutual respect for everyone, strong ecumenical friendships and a vigorous promotion of peace and justice—hallmarks of the ministry of Jesus.”

By the mid-1990s it was clear that the institute was outgrowing its academic footprint, and in 1997 it formally became the School of Theology and Ministry with Loretta Jancoski as its first dean.

Hunthausen remained supportive of the School of Theology and Ministry in his retirement, which he spent in his home diocese of Helena, where he lived with his brother Father Jack, also a priest. In 2002 he was invited back to the school by Father Howell, then serving as dean, to give a talk on the 40th anniversary of the start of the Second Vatican Council, a seminal event for the Church and for him personally. (He would say, “The four sessions of the Council were the best possible formation anyone could have had to be a bishop.”)

Another momentous occasion brought Archbishop Hunthausen back to Seattle U’s campus in 2004. This time, he was on hand for the dedication of a newly remodeled building on the north side of campus, which would be home to the School of Theology and Ministry. Hunthausen Hall, as it’s been known since, is a fitting tribute to the archbishop, says Father Howell. “This revered pastoral leader was after all the inspiration for so much of what had occurred in the transformation of ministry, for the welcoming of absolutely everyone in the church, for enhancing the ecclesial leadership role of women,  and for the strengthening of ecumenical ties” at Seattle U.

In his letter to the university community, President Sundborg spoke of Archbishop Hunthausen’s commitment to ecumenism as well as the other gifts he brought to the archdiocese: “He nurtured a more inclusive Church, empowering laypersons to take on roles traditionally reserved for clergy…He was a voice for the poor and the marginalized and welcomed with open arms those who historically had not been embraced by the Church. Ever grounded by his moral convictions and conscience, Archbishop Hunthausen firmly stood up for what he believed was right. A champion for peace and justice, he actively opposed nuclear weapons…”

While admired by many for the actions and stances he took, Archbishop Hunthausen was often at odds with Pope John Paul II and the more conservative members of the Church, as well as the Reagan administration. Some have mused at how differently his efforts would have been received under the current pope, who—much like Hunthausen—has placed an emphasis on mercy and compassion.

Father Howell remembers visiting with Archbishop Hunthausen in Helena about a year after Francis was elected pope. “I think you and the new pope would get along just fine,” Father Howell said. “Yes, I think we would,” the archbishop responded with a chuckle. “Sometimes I’d like to stay around for another 25 years just to see what happens. And then the next moment I’m ready to go.”

As Archbishop Hunthausen goes, he leaves behind a vision for the Church and for our Catholic and Jesuit university that is as relevant and resonant today as it was when he arrived in Seattle in 1975 to lead the archdiocese.