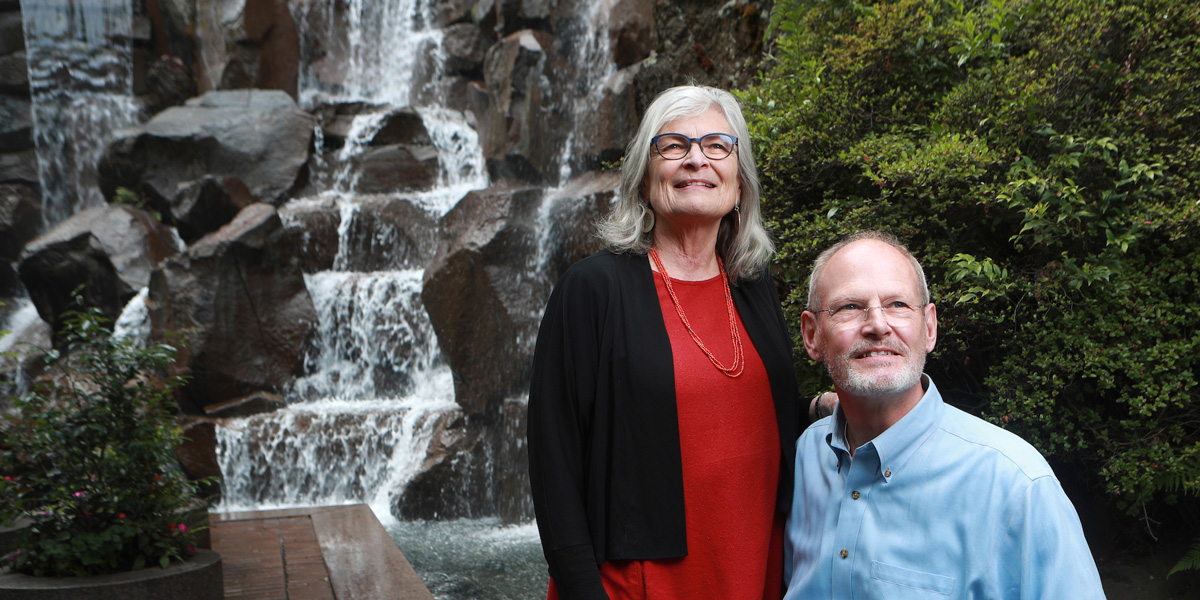 This year’s recipients of the St. Ignatius Medal are a couple whose conversion to Catholicism in the 1980s helped transform an innate call to service into an unwavering commitment to the poor. Steve and Tricia Trainer, ’02 MDiv, will receive the university’s highest honor, recognizing individuals whose voluntarism, leadership, humility and service inspire and profoundly influence the progress of the university.

To the Trainers, “(i)t’s all about the people.” Through their decades of service and philanthropy, they have formed close relationships that extend from indigenous people of the Pacific Northwest to people around the globe, along with many Jesuits and individuals within the university.

The Trainers began volunteering together as Stanford undergraduates during a 1968 trip to Hong Kong to teach English. Tricia also inherited a family tradition of service that she brought to the marriage. Steve built a successful career as vice president and principal at Wright Runstad & Company and then as co-founder of Seneca Group.

A relationship with the Chief Seattle Club began one day in 1992 when its then director Sister Julie Codd, CSJ, asked Tricia to bring soup to the social service center for urban Native American people. The building was dilapidated and cold, with holes in the wood floor. The Trainers raised money for a new building and, 26 years later, remain actively involved with the organization.

Global initiatives are important work of the Trainers. Steve met Joe Orlando, director of the Center for Jesuit Education, for coffee to talk about what Joe said was the need for greater global engagement at Seattle U. They discussed the importance of elevating global issues and experiencing places in the world where Americans don’t normally go. This conversation progressed to a written proposal to President Stephen Sundborg, S.J., for a Global Engagement Initiative that would develop opportunities for students, faculty and staff to participate in research, study and service experiences in Nicaragua. The proposal led to the Trainers funding the initiative in 2014.

The Nicaragua Initiative expanded to become the Central America Initiative. Under the leadership of Assistant Professor Serena Cosgrove, PhD, who credits the Trainers with helping Seattle U establish a “thriving set of relationships” in the region, there are outreach, programs and research across Nicaragua, including the Caribbean Coast, and El Salvador, Guatemala, Honduras and beyond. Seattle U has also launched global initiatives in India and Africa.

It fits Steve’s vision that “every student should have firsthand experience outside the U.S. as part of their college experience.”

Tricia, who received a master’s in divinity from the School of Theology and Ministry, worked as a spiritual director for 25 years for the Spiritual Exercises in Everyday Life program in Seattle. She also worked in family ministry at St. Joseph Church, the couple’s parish.

At Seattle U, Tricia co-founded the Indigenous Peoples Institute (IPI), which supports and celebrates Native students on campus. She and Steve both serve on IPI’s working group.

With new projects in the works, the Trainers balance volunteer duties against daily shifts with four grandchildren, ages 18 months to 7 years old, who live close by.

Pat Twohy, S.J., who has worked closely with the Trainers on several projects over the years, says the couple’s commitment is the reason many organizations exist.

“With an eye for the environment and all peoples, Steve and Tricia have chosen to live simply, sharing all that they can with so many of us,” Twohy says. “Their generosity makes good things happen. Their combined wisdom and compassion truly lights up our world.”