What percentage of SU employees gave to this year's Faculty and Staff Giving Campaign? 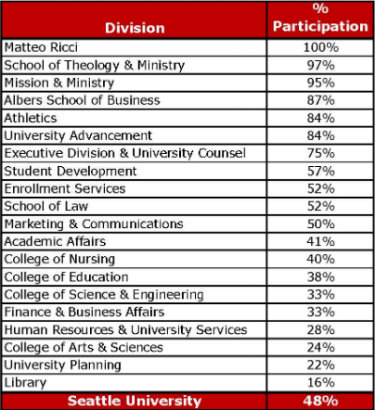 Q:  What percentage of SU employees gave to this year's Faculty and Staff Giving Campaign?

A:  For the fifth year in a row, Seattle University employees came together to break a record for the Faculty & Staff Giving Campaign. In fiscal year 2012, which ended June 30, an unprecedented 48 percent of our university community joined in the fundraising effort to help students-that's a four percent increase over last year's participation.

When all the gifts were counted, 609 of our colleagues had donated $275,672 to support Seattle University. Employees designated their gifts to support a wide variety of programs on campus, from scholarships and general operations to athletics and student activities. The campaign was led by co-chairs Penny Koch-Patterson, associate director of the Albers Center for Leadership Formation, and Phil Thompson, professor and chair of Civil and Environmental Engineering.

"Penny and Phil were joined by a dedicated group of volunteers who represented many of SU's departments and colleges and who worked to promote the campaign across campus," said Leigh Ann Gilmer, assistant director of Annual Giving. "Their efforts and your generosity will help Seattle University continue to provide hard-working students with an exceptional Jesuit education and an enriching college experience."