Weighing in on immigration

The Jesuits of Canada and the United States have written a letter to members of the U.S. Congress and Senate, urging them to reject amendments to the Department of Homeland Security Appropriations Bill that will hurt immigrants, Jesuits.org has reported. 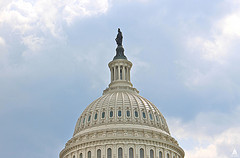 "The Jesuits of the United States call upon the U.S. Senate and House of Representatives to pass a Department of Homeland Security Appropriations Bill free of harmful immigration amendments that seek to block or undermine the recent Executive Action on immigration.

"Jesuit organizations throughout our country have long advocated for comprehensive, humane, and much needed solutions to our current broken immigration system. In the absence of comprehensive legislative reform, we support the President's use of his legal and constitutional authority to relieve families of the constant fear of deportation."

The letter concludes: "Together with Pope Francis, 'we pray for a heart which will embrace immigrants,' because in his words, 'God will judge us on how we have treated the most needy.' We urge you to remember the humanity of our migrant brothers and sisters as you consider these important immigration related issues. Going forward, rest assured that we will continue to challenge you to support immigration policies that treat our undocumented neighbors with the dignity and respect that all people deserve."

The full letter can be read here.

Also, Seattle University students have joined students at 10 other Catholic universities in urging members of Congress who graduated from Catholic colleges and universities to not cut off funding for the president's Deferred Action for Childhood Arrivals program known as DACA, as one of the amendments of the bill would do. Read more at Catholic Sentinel.