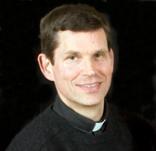 Father James Pribek, associate professor of English at Canisius College in Buffalo, joined the English Department in the College of Arts and Sciences this spring as the LeRoux Scholar. Father Pribek will give a public lecture, "'When Hope and History Rhyme': Irish Literature as a Resource for Hope," on May 10 at 4 p.m. in Wyckoff Auditorium. He recently took the time to field some questions from The Commons.

I was born and raised in La Crosse, Wisconsin, where my father practiced medicine for almost 40 years. I grew up in a big Catholic family: I am number five of seven. We knew plenty of families larger than ours, however: those were the years when parents could afford to have more than a few children, and neighborhoods and schools provided a lot of help. With those kinds of numbers, we had our own "kids' culture" in which the older siblings, friends and teachers filled in for parents for a good portion of the day.

On why he decided to enter the Jesuits:

I locate the roots of my vocation in the Catholic culture of the place and time. To be Catholic meant to be literate, funny, community-minded and culture-friendly. The optimism about the church's place in the world ignited by Vatican II was still very much alive. I went to a large state university, the University of Wisconsin-Madison, which I loved. At that time a group of Jesuits, some doing doctoral studies and some full-time, helped at the university's Catholic center, and they provided me with all sorts of new images of priests. One was a spirited preacher who routinely filled the church to capacity and beyond for his Sunday morning masses; another was an eloquent, scholarly Jesuit who seemed to have just the right word for the meditative Sunday night masses.

I met up with Jesuits again after graduation when I was living in Milwaukee: my sister worked at Marquette University, and there I came to know Jesuits as her associates and friends. The Jesuits struck me as quite different, one from another, but all seemed energetic, witty, kind and caught up with the best things happening in their fields of endeavor. Somehow I got the impression that a life given to the Jesuits would not be ruled by fear and conformity, and would be a life of consequence and exploration of the good and the Godly. I joined the order in 1987 alongside Marquette grad, Mike Bayard, and despite the usual amount of challenges, changes and hard times, I haven't really looked back. My impression that, for better or worse, this would not be a way of life tainted by regret, has certainly proven true.

On his home institution:

At Canisius, I teach all the Irish literature courses as well as a good few introductory English and Honors core courses. My Irish classes include surveys of poetry, prose, and drama as well as seminars in the work of James Joyce and W.B. Yeats. I also preside at campus masses and direct students on Campus Ministry's Ignatian retreats. I advise many English students and in recent years have directed our department's activities for students and faculty, including our annual banquet. I have a host of smaller duties, but the ones I have listed would take up most of my time. On weekends I routinely assist three Buffalo parishes.  In the summers I try to prepare and present papers at conferences dedicated to the study of James Joyce and John Henry Newman, the two writers on whom my doctoral dissertation was focused.

On what he's doing at SU this quarter:

I always put teaching first, so my first job here is teaching my course in Modern Irish Drama. I am also preparing a talk on hope in Irish literature that I'll offer as the LeRoux Lecture (again, on May 10). I am preparing two more papers for presentation and, I hope, publication: one on the real-life preacher of the infamous sermon on hell in Joyce's Portrait of the Artist as a Young Man and another on a longtime promoter of Cardinal Newman's work in the theological world.

On his time at Seattle University:

I enjoy getting to know this area and this university, whose model and mission are close to that of my home school, though there are also some significant differences. I think that is part of being a visiting professor: the exchange of ideas about education and service within the ever-more-united network of Jesuit universities. Administrative staff from the Jesuit schools routinely gather for this kind of exchange and support, but we faculty, less so. All of us need it in order to stay informed and flexible, and to remind us that we are part of a cooperative, worldwide endeavor.

I have been much impressed by Seattle University's spiritual ministry, especially the Novena of Grace and the Holy Week services. There is real life, energy and joy there. The Jesuit Community enjoys the reputation as one of the best in the country, and I have certainly found it so. The campus is compact but it does not feel crowded or even especially urban: the trees, green spaces and the Quad create a more natural and human atmosphere. Because I love to walk and to explore cities, I enjoy the proximity to the downtown area. If there have been any surprises, they would be the quietness of the campus after-hours and the weather, which is changeable but overall quite pleasant and full of the beauties of spring.

On what's next for him:

I will be at Seattle University until the middle of June, at which time I'll travel to Los Angeles and complete the second summer of my tertianship with the California Program. This year away from Canisius has provided time not only for rest and renewal, but also to do tertianship and to complete a number of personal and research projects. I went straight from formation into doctoral studies and then into teaching, so the last year allowed me to "catch my breath" and refocus my energies. I needed that after 25 years in the Jesuits, but also after the experience of losing my parents in recent years. In God's providence I was able to be present for their final illnesses and deaths, which was a profound blessing.  Yet the experience of losing a parent is also earth-shattering on a number of levels. As I see spring emerge here, I think of a poem that has helped me grieve: Philip Larkin's "The Trees," and its poignant closing line expressing the message of the new leaves and blossoms: "Begin afresh, afresh, afresh."