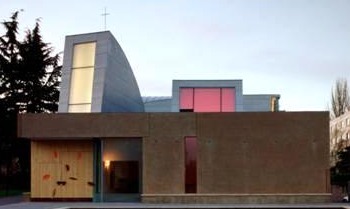 Ever wonder why so many Jesuit schools like Seattle U are located in cities? Thomas Lucas, S.J., of the University of San Francisco, might be the best person to answer that question, and he'll be at Seattle University this month.

A leading authority on the Jesuits' special affinity for urban areas, Father Lucas authored Landmarking: City, Church and Jesuit Urban Strategy, which won an Alpha Sigma Nu National Book Award in 1998. Lucas will speak on that topic when he visits SU on Monday, April 16. Faculty and staff are invited to RSVP for the event, which begins with an optional tour of the Chapel of St. Ignatius that leaves from 1313 E. Columbia (3:30-4:30 p.m.) and continues with an opportunity to socialize (4:30-5 p.m.) before Lucas gives his presentation (5 to 6:15 p.m.).

Robert Schwartz, associate vice president for Facilities Services, heard Lucas speak at USF last spring. "I was captivated by how strategic the Jesuits were in locating their institutions and ministries," Schwartz says. "It's not by happenstance that they chose to be in the heart of the city. Having Father Lucas here will be an opportunity for us to reflect on why it matters that there's a Jesuit school in Seattle."

Lucas' visit is being co-sponsored by Facilities Services and Mission and Ministry. Schwartz says there has been broad interest in the presentation, pointing to significant sponsorship support from the design and construction community as one indication.

Lucas, professor of Art+Architecture and director of USF's Thacher Gallery, is an internationally recognized expert in Jesuit art history, as well as a liturgical designer and artist with an international portfolio. As a graduate student, Lucas designed and directed the restoration of St. Ignatius' apartments in Rome. He has received an award from the American Institute of Architects and has been involved in a variety of projects, including the restoration of the St. Ignatius Cathedral in Shanghai, which was badly damaged during the Cultural Revolution.