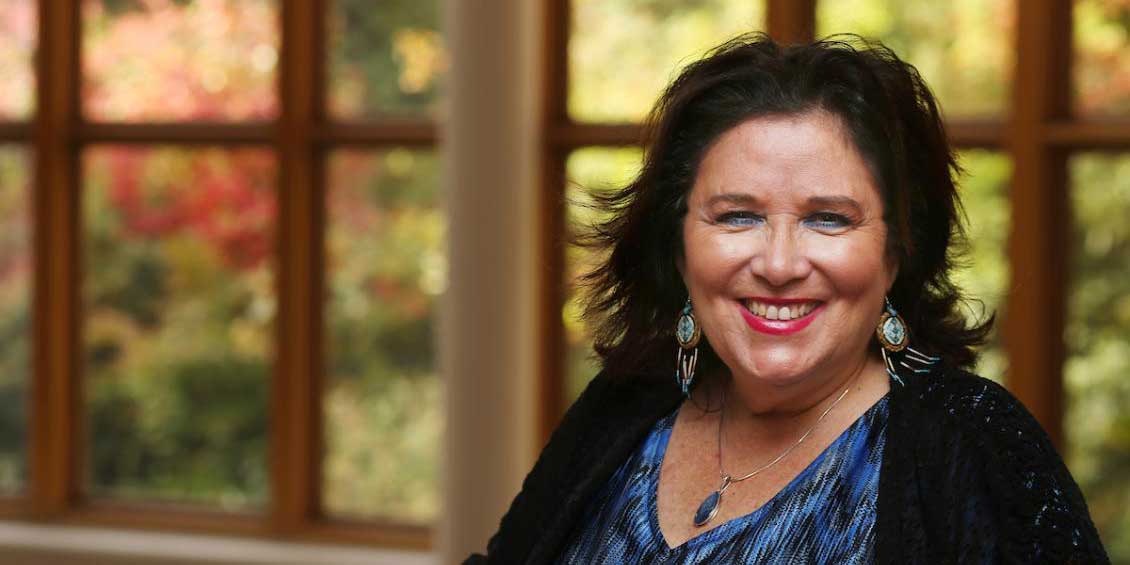 Professor Jeanette Rodriguez, PhD, is a member of an international roundtable hoping to influence the Pope's next Catholic teaching.

If Pope Francis’ next Catholic teaching is about nonviolent action, Professor Jeanette Rodriguez, PhD, will have played a role in its theological underpinnings. Rodriguez, who teaches theology and religious studies, is an invited member of one of five international roundtables convened by the Catholic Nonviolence Initiative (CNI). The aim is to help achieve a goal of the Catholic Church to recommit to the centrality of Gospel nonviolence and to integrate it throughout every level of the Church.

The roundtable Rodriguez will spend the next year or so working on is called “Foundational Theology of Nonviolence.” She joins 16 colleagues from around the world on the panel that will use monthly Skype meetings and submit papers to prepare for a CNI conference in Rome in late 2018 or early 2019.

The purpose of that conference is to “present the findings of this research to the Vatican as the basis for what we hope will be a major teaching of the Church on nonviolence, including the possibility of a papal encyclical on ‘Nonviolence and Just Peace,’” according to the roundtable organizers.

“It was a surprise. It really was a surprise,” says Rodriguez of her invitation. “It’s an honor, of course, and a big responsibility. My roundtable colleagues are all top-notch theologians in their field.”

Rodriguez: A Theologian of Distinction

David Powers, PhD, dean of the College of Arts and Sciences, says “We are very proud that Professor Rodriguez will be a member of this roundtable. It is a testament to her and to the expertise of the Theology and Religious Studies Department, who are directly connected to the spiritual issues of our time.”

Ken Butigan, senior lecturer in the Peace, Justice and Conflict Studies department at DePaul University in Chicago and one of the theology roundtable conveners, says organizers sought “theologians of distinction capable of collaborating in this landmark venture.

“Dr. Rodriguez brings unique gifts to this bold and historic enterprise,” says Butigan. “Her publishing and areas of expertise—on Jesus, women and theology, cultural memory, theology in a multi-cultural context and the theology of the human person—all bring critical tools to the task at hand. Most aptly, the insights and dynamics flowing from her work on the spirituality of nonviolence, including in courses taught on this theme at Seattle University and Eastern Mennonite University, will naturally bring richness and clarity to this initiative.”

A celebrated faculty-scholar, Rodriguez has taught at Seattle U for 27 years. In 2013 she was named the James B. McGoldrick Fellow. Internationally known for her scholarship on Latin American theology and religion, gender and cultural diversity, Rodriguez has published and presented prolifically. She has held a number of key leadership positions and been honored with several awards and recognitions, including the 2010 Distinguished Teaching Award. Rodriguez has been chair of the Department of Theology and Religious Studies, held the Wismer Chair and Pigott McCone Chair and founded the Center for the Study of Justice in Society.

And for many years she’s been involved with Catholic peace reform movements, including as a board member of Pax Christi USA and Pace e Bene, which conducts trainings in nonviolence. She is also a frequent participant on the speakers’ circuit to talk about spirituality and peace building. Rodriguez, a self-described liberation theologian, was among the first Latina theologians in the U.S.

Discerning the Theology of Nonviolence

“Nonviolence is not just a concept or a methodology—it’s a tool, a way of being,” says Rodriguez. “You can’t wake up from one day to the next and say, ‘I want to be nonviolent.’ You need to have a spiritual practice; habits that help form your character in a way that will help stop you from reacting violently, not just physical violence but the way we talk to one another. It involves the choices we make, the way we treat people.”

Bringing a clinical lens to theology will influence her role on the roundtable. “My own background is theology and psychology. Formation is a key topic for me. How do we fill the emptiness inside us that inhibits our creativity? So I bring that clinical lens into theology,” she said when discussing the role she will have on the theology roundtable. “I also bring the lens that I am a minoritized member as a Latina woman in the United States and I bring the ‘isms’ that come along with that and try to help people understand not just the various kinds of violence that happen but the kind of formation we need to do in order to counter that violence.”

While Rodriguez says it’s too early to know more specifically what her contributions to the group will be she and the others are tackling several topics including Christian complicity in the culture of death, questions of ecclesiology (reflecting on ways the Catholic Church can integrate Gospel nonviolence at every level of the Church, including confessing and transforming its own violence and providing Catholics everywhere with the spiritual and practical tools for the nonviolent life), how can we express our sense of Christian discipleship in which all baptized Christians are called, how does the theology of nonviolence relate to the political task of strengthening peace and how to improve listening to grassroots groups.

Butigan says the Foundational Theology of Nonviolence roundtable will seek to articulate a comprehensive theology of active nonviolence drawing on contemporary theological reflection and publishing on nonviolence, inclusive contextual theologies, and theologies on the care of creation.

“We will explore developing a theological framework that takes into account the breadth and depth of God’s enduring nonviolent call and contemporary ‘signs of the times,’” he says.

When asked about what she hopes the outcome of this work will be, Rodriguez says, “My aspiration is that the Pope will take the work of his theologians and write an encyclical about nonviolence. The world has always been a place of brokenness but today, given the social, political and economic reality, right now we could really use some words on how to live our lives differently … that will include reconciliation and restorative justice.”

A project of Pax Christi International, the Catholic Nonviolence Initiative (CNI) was formed after the landmark April 2016 Nonviolence and Just Peace Conference in Rome co-sponsored by the Vatican’s Pontifical Council for Justice and Peace. CNI has supported many efforts advancing the spread of nonviolence in the church and world, including Pope Francis’ historic 2017 World Day of Peace message, “Nonviolence: A Style of Politics for Peace.”

Other roundtable themes are:

· The biblical foundations of nonviolence, including its centrality to the life and mission of Jesus;

· Nonviolence and Just Peace: A new moral framework for Catholic theology in the context of a violent world;

· The power of nonviolence: Concrete experience, principles, methods, and effectiveness— Past, present and envisioned future (worldwide development and application); and

· Integrating Gospel nonviolence at every level of the Church.