SU Jesuits on the run

The Dec. 1 Seattle Marathon was very much a Seattle University affair with Uli Steidl, assistant coach of cross country and track and field, winning it all. It was Steidl's 10th Seattle Marathon victory, giving him the fourth-most titles within a single marathon series in the United States. Meanwhile, alumnus Matthew McClement won the half marathon to ensure a complete Redhawk sweep. 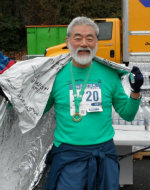 Also running in the marathon were two SU Jesuits. Natch Ohno, S.J., assistant to the vice president for Student Development, completed the full marathon, while Trung Pham, S.J., assistant professor of Fine Arts, did the half.

Reached a few days after his 26.2-mile jog around the greater Seattle area, Fr. Ohno deflected attention from his own accomplishment, instead speaking effusively of Steidl's remarkable feat and praising him for the joyfulness with which he runs. But after some prodding, Ohno, left, spoke a bit about the experience, saying he had run a few full marathons before-including one held in conjunction with the 1990 Goodwill Games that former SU President William Sullivan, S.J., chaired-but that it had been a while since he did one.

Ohno ran in the Seattle half marathon last year and started training this summer for the full. He finished at 5:20. "I made it. That was my goal," he said, adding that the hardest part was the wind, 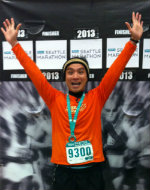 particularly coming across the I-90 floating bridge.

For Fr. Pham, the half marathon was his first ever. He played tennis everyday when he lived in California, but picked up running after moving to Seattle "because of its beautiful nature, clean air and different kinds of trails." He said Fr. Ohno suggested he run in the marathon.

"I did not know I could run that far, but my knees are fine" reported Fr. Pham, right. He finished in 1:47 and is now inspired to train for the full marathon next year.

"Natch is my hero for running a full marathon at the age of 65."