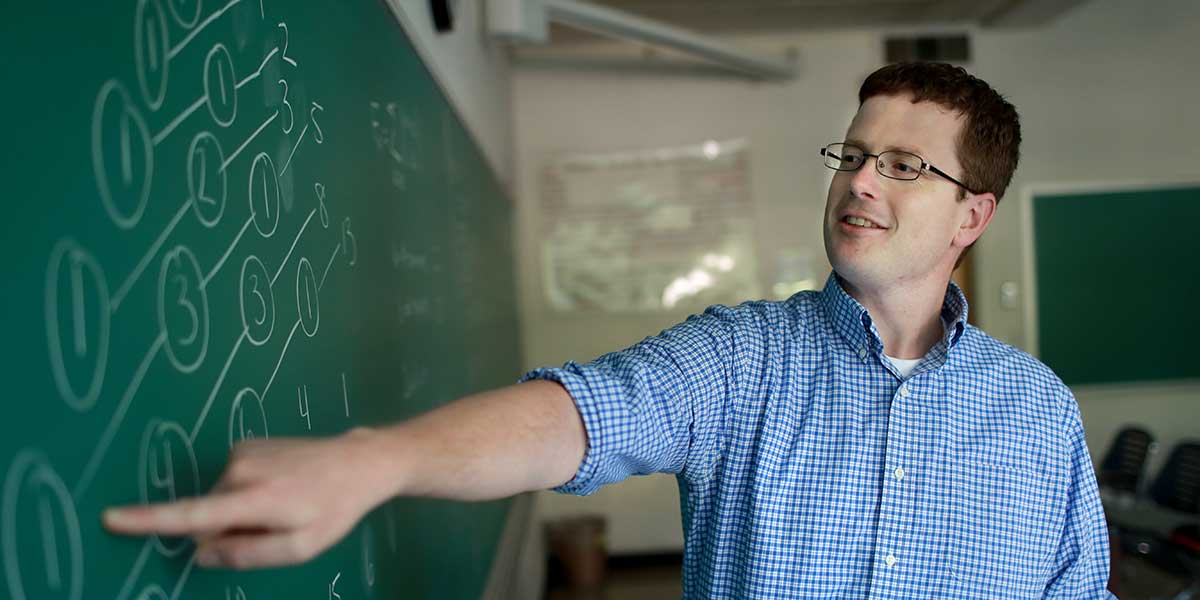 Steven Klee, PhD, was named a recipient of a prestigious 2017 Henry L. Alder Award from the Mathematical Association of America

What makes for an award-winning college math professor? An “uncanny” ability to simplify complicated concepts.  A passion for undergraduate research.  A dedication to student success beyond earning a degree.  A commitment to math education for middle- and high school students.  And a sense of humor.

These attributes and more have earned Steven Klee, PhD, assistant professor of mathematics, a prestigious 2017 Henry L. Alder Award from the Mathematical Association of America, which was announced today by the organization. The MAA awards up to only three of these annually “to honor beginning college or university faculty whose teaching has been extraordinarily successful and whose effectiveness in teaching undergraduate mathematics is shown to have influence beyond their own classrooms.”

Klee, one of two awardees this year, was noted “for seamlessly incorporating undergraduate research into his classroom curriculum and mentoring student researchers who go on to publish and present their work,” according to an MAA statement.

“As an enthusiastic, innovative, and engaging educator, it comes as no surprise to his students and colleagues that Dr. Klee was chosen to receive the Alder award,” said Allison Henrich, PhD, associate professor in the Seattle U math program, and herself a 2015 Alder Award recipient. “In the classroom, Dr. Klee is known for his humor and his uncanny ability to simplify complicated mathematical concepts. He puts a great amount of time and effort into mentoring his students both in his classes and well beyond as they navigate the challenges of completing their degrees and pursuing their next adventures.”

Klee, who primarily teaches linear algebra, is passionate about undergraduate research, having mentored 31 research students in the past six years and serving as co-principal investigator and research mentor in the Seattle University Mathematics Early Research (SUMmER) program, which is funded by a National Science Foundation grant.

“In terms of learning, research breaks you away from this idea that everything you ever needed to know is going to be an answer in the back of a textbook that somebody has already figured out,” said Klee. “There are things you can learn that nobody has ever known before so it gives you a lot of independence in taking charge of your own education and your own learning.

“Going forward, it doesn’t matter whether students go to grad school in math or get a job as an engineer; employers want people who can think for themselves and take what they currently know and apply it to an unsolved problem.”

Klee’s own research, also funded by the National Science Foundation, is in discrete geometry, which aims to use discrete objects to approximate familiar geometric spaces.

His impact outside of Seattle U includes involvement in three programs that benefit K-12 students. Klee is the co-founder and co-director of the UW Math Olympiad and Math Hour for students in 6th through 9th grade; he is the co-director of local math circles for 7th and 8th graders; and he has served as a counselor, an invited speaker, and a mini-course instructor for the Summer Institute for Mathematics at the University of Washington for gifted high school students.

“Linear algebra is a break from what students learn in calculus because it’s a different way of thinking about math,” said Klee. “It requires a lot more abstraction, which makes it challenging for a lot of students.  It’s all based on geometry so I try to work with them to draw pictures and help them see why these abstract definitions are based on things they already know from calculus and other courses that led them up to this point.”

In practice, linear algebra has a wealth of applications in applied mathematics, statistics and machine learning (big data).For example, is it used in the algorithms that Google uses to find top search results.