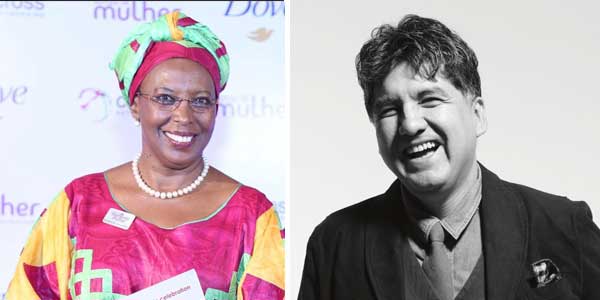 Acclaimed writer Sherman Alexie and international humanitarian Marguerite “Maggy” Barankitse will speak at Seattle U’s undergraduate and graduate commencement ceremonies, respectively, June 11 at KeyArena at Seattle Center. Both are voices for the marginalized and dispossessed and will be making return visits to campus.

Alexie is a gifted storyteller whose poems, short stories and other works portray life on and off Indian reservations. With poignancy and humor, his stories bring to the fore the struggles that many Native peoples confront while also conveying a sense of survival, resilience and hope.

Sherman’s own life has followed a similar narrative. A Spokane/Coeur d’Alene tribal member, he grew up on the Spokane Indian Reservation. As a child, he faced a life-threatening medical condition; later in life, he battled alcohol abuse. In college, he began writing poetry and short fiction.

The author is the recipient of numerous literary awards such as the PEN/Faulkner Award for Fiction, the PEN/Hemingway Citation for Best First Fiction and the National Book Award for Young People’s Literature.
In 1998 the movie Smoke Signals, which Alexie wrote and co-produced, was a hit among critics and audiences alike, nabbing the Audience Award at that year’s Sundance Film Festival.
Seattle U has welcomed Alexie to campus several times over the years, including in 2000 when he received an Honorary Doctorate and 2009 when he was a keynote speaker at the Search for Meaning Book Festival.

Graduate commencement speaker Barankitse is also making a return trip to Seattle U. In 2008 she was the recipient of the Opus Prize, an honor given to faith-based humanitarians that the university was chosen to administer that year.

In the fall of 1993, Barankitse was working for the Catholic bishop of Ruyigi, in eastern Burundi, when ethnic Tutsis stormed the bishop’s residence and killed more than 70 Hutus. Amid the slaughter, Barankitse managed to save 25 children that day and she took them in as her own. But she felt called by God to do even more and went on to found Maison Shalom as a safe haven for the youngest and most vulnerable survivors of the war. Since then, Maison Shalom has provided a home, education, health care and other services to tens of thousands of children.

In addition to the Opus Prize, Barankitse has received numerous international awards, including the Nansen Refugee Award, which described her as the “Angel from Burundi,” from the United Nations High Commissioner for Refugees.

Her life and work are aligned with the university’s mission and particularly with its outreach to the young people of our neighborhood through the Seattle University Youth Initiative. Barankitse will receive an Honorary Doctorate at commencement.