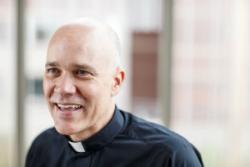 Dave Anderson, S.J., already ministers to Redhawks as chaplain for SU's alumni as well as the men's basketball team. Hawks of a different persuasion were recently added to his fold recently: Fr. Anderson is now one of two priests who celebrate mass for Catholic Seahawks players and coaches the night before their games.

It's a familiar role for Fr. Anderson. He had previously been filling in for the outgoing "Seahawks priest," Father Tom Belleque. In addition, Anderson had been celebrating mass for Catholic players and coaches on the visiting teams when they came to play the Seahawks. He seems to have done a good job of helping the opponents keep things in perspective and not put up too much of a fight at CenturyLink. Now he's preaching to the good guys.

Of course for Anderson, it's not about influencing games. As he told Northwest Catholic, "I love the Seahawks and I want to see them win, but my primary interest is how can I go to those places where the Eucharist is not being offered."