Responding to the Call

As a member of the Washington Disaster Medical Assistance Team (WA-DMAT), Diane Switzer is accustomed to being on call for humanitarian missions throughout the world. And yet, as she shared at a College of Nursing Faculty Scholars Forum lecture this month, her most recent deployment was somewhat unexpected.

DMAT members make themselves available for deployment every three months. Around the end of September, Switzer (DNP, ARNP, FAEN), an assistant clinical professor in the College of Nursing, was three days away from the end of her most recent round of availability. While she was keenly aware of the cascade of natural disasters striking various parts of the world around that time, Switzer felt reasonably confident she was staying put. DMAT members are typically put on alert days before they are activated; if she was being deployed, they would have given her a heads-up by then, she surmised. “I’m not going anywhere,” she thought to herself.

And then the phone rang. She was being sent to Puerto Rico to assist with the medical response to Hurricane Maria. Oh—and by the way, she would need to be on a plane that evening.

“I had just put my suitcase in the garage,” recalls Switzer (left), who had recently returned from a trip to Peru. “Wait,” she asked the caller, “what happened to the alert phase?”

Switzer, who joined SU’s faculty in 2014, had three hours to go shopping for the water purifier they told her to bring, pack the clothes and other items she would need and otherwise get ready before heading to the airport.

Switzer has been a part of disaster relief teams since 2009. For her, the appeal of the program is the opportunity to help make a difference for a relatively short period of time—WA-DMAT workers are deployed for a maximum of 14 days—which fits with her other professional obligations. (She was also sent to Haiti following the earthquake in 2010 where she helped treat numerous injuries and assist with surgeries.)

Her first stop was Atlanta where she joined other DMAT members. Because of the conditions on the ravaged island, the team had to sit tight before continuing to Puerto Rico. After three days of restlessly waiting and pacing around their hotel—they couldn’t wander far, as they needed to be ready to leave at a moment’s notice—a charter plane arrived from Canada to fly them to their destination.

Upon landing in San Juan, the devastation was immediately apparent, but the team’s mission would take some time to be formulated. More waiting ensued. After a number of days in San Juan, and a few hiccups and changes of plans, Switzer’s team received their assignment and headed to the small town Comerío, which is about an hour’s drive south of the capital. They had heard that the hardest-hit areas were in the interior of the island, and their car ride only confirmed it.

In Comerío the team set up a makeshift clinic in the mayor’s office and began treating patients. With fresh water in short supply and many relying on contaminated streams to wash their hands, conjunctivitis was common. Perhaps the most pressing need the medical team addressed was ensuring that people had access to medications for chronic conditions such as diabetes and hypertension. While conditions presented by the patients in Comerío were generally not acute, they required medical attention that, if untreated, could have become more serious or fatal. “These basic medical needs can often be overlooked in disasters,” says Switzer. 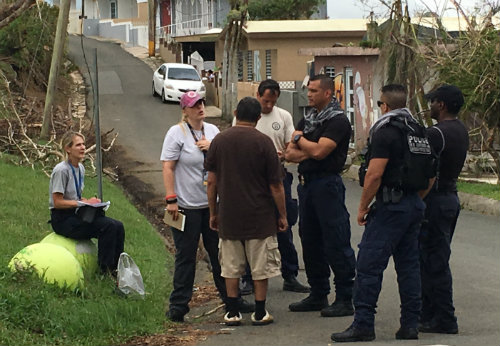 When they weren’t caring for patients in the mayor’s office, the team ventured out to meet the victims where they were. She recounted a trip she and others took up a long, winding road to the top of a mountain where they were led to a bedridden man. He refused to go to the hospital but the medical team was able to provide the care and insulin he needed. When Switzer encountered a sick man in the street (pictured here), she helped diagnose him on the spot and wrote the necessary prescription.

As they went about their work, evidence of the devastation never left their sights, from the flattened homes and downed electrical wires to more subtle cues like a refrigerator in one patient’s home, its door wide open, long emptied of spoiling food.

Asked what she took away from the experience, Switzer says it highlighted the need for new paradigms in how medical teams respond to natural disasters. While the prevailing notion had been to set up a field hospital and wait for people to come, “That had to be reversed,” she says, “We had to reach out to the community.”