Ryan Rallanka, S.J., a 2006 graduate of Seattle University, was ordained to the diaconate on Sunday, Oct. 22. Celebrating the Mass, which took place at the Cathedral of Christ the Light in Oakland, Calif., was the Most Reverend Michael C. Barber, S.J., bishop of Oakland.

For a Jesuit in formation, ordination to the diaconate is the last step before priestly ordination in the Society of Jesus (Jesuits). 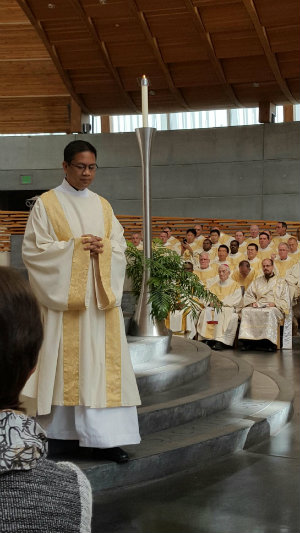 Double majoring in English and sociology at Seattle U, Rallanka received the 2006 Mission Award for Outstanding Leadership in Faith. During his time as an SU student he also received a fellowship from Humanity in Action, an international educational organization.

Rallanka (pictured here during his ordination) joined the Society of Jesus in August 2006 and entered the Jesuit Novitiate in Portland, Ore. After two years as a novice and taking his First Vows in 2008, Rallanka was sent to Fordham University in New York, where he obtained a Master's in Philosophical Resources in 2011.

Following his time at Fordham, he returned to Portland his Regency assignment where he taught theology for three years to freshman students at Jesuit High School. In addition to teaching, Rallanka was also a director of SEEL (Spiritual Exercises in Everyday Life) at St. Ignatius Parish.

Rallanka is currently a student at the Jesuit School of Theology of Santa Clara University in preparation for his ordination to the priesthood in June 2017. As part of his training, he currently visits San Quentin Prison weekly and helps with the music at the Sunday Liturgies.

"I look back on my time at Seattle University quite fondly," says Rallanka. "Academically, I feel that SU trained me very well in the art of academic writing and critical thinking as a graduate of the Honors Program. This training has been invaluable in my studies as a Jesuit in the areas of philosophy and theology.

"Spiritually, SU is really where I began to develop my adult faith. I was heavily involved with not only the University Choirs but also with the Liturgical Choir as well. I regularly sang at the 9pm student Masses on Sundays ever since I was a freshman and very much appreciated the faith community that I prayed with regularly. I was also regularly involved with Campus Ministry, having attended and helped lead retreats such as Search. I also was involved with service trips, such as a Campus Ministry-sponsored immersion trip to the Philippines and local trips to Yakima for Habitat for Humanity.

"I am especially grateful to the Jesuits on campus who were also instrumental in my discernment to enter the Society. Specifically, at the time, Fr. Mike Bayard and Fr. Jack Bentz were my spiritual directors who really helped me in my process to become a Jesuit."