Of Jesuits and JVs

We've got some people to recognize this month-Jesuits celebrating important milestones and alumni beginning their service in the Jesuit Volunteer Corps. 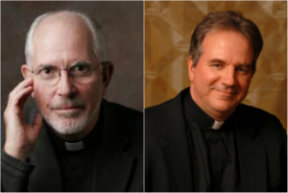 First the Jesuits. Seattle University's own Peter Ely, S.J. (left) , and Pat Kelly, S.J., both associate professors of theology, are celebrating 60 and 25 years in the Society of Jesus (a.k.a. the Jesuits), respectively.

Other nearby Jesuits who are celebrating milestones include John Rashford, S.J. Father Rashford, who works in hospital ministry and lives in the Capitol Hill Jesuit community (now called Faber House), is marking his 60th year as a Jesuit. Gene Delmore, S.J., and Gerry Chapdelaine, S.J., who both live in the Bellarmine Tacoma Jesuit community, are respectively marking 60 years in the society 50 years as a priest.

Peter Henriot, S.J., who is moving to the Bellarmine Community is celebrating 60 years as a Jesuit. Father Henriot was transferred from the Oregon Province to the Zambia/Malawi province many years ago and most recently has served as director of development for a new school, Loyola Jesuit Secondary School, in Kasungu, Malawi.

Now onto the Jesuit Volunteers (JVs). The following seven Seattle University graduates are serving in JVC or JVC Northwest.

Thank you to Margaret Moore in the Arrupe Jesuit Community and Jimmy McCarty in Campus Ministry for providing the foregoing information.