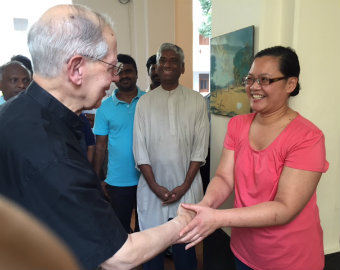 Catherine Punsalan-Manlimos, director of the Institute for Catholic Thought and Culture (ICTC), recently found herself in the company of the leader of the Jesuits. Here's how it went down…

Punsalan-Manlimos was in Chennai, India, for an international seminar on "Religions in Society in Asia" (sponsored by Loyola College's Institute for Dialogue with Cultures and Religions). Adolfo Nicolás, S.J., superior general of the Society of Jesus, happened to have a layover in Chennai on his way to visiting other parts of the country and was staying at the Jesuit residence at Loyola. Punsalan-Manlimos, who had been taking her meals at the residence during the conference, heard that Father Nicolás was about to come down for breakfast.

"I could not miss my one opportunity to introduce myself, so I waited with some of the other Jesuits in the community to introduce myself to him," says Punsalan-Manlimos. "I am sure it was quite a surprising sight to see a woman at the Jesuit Residence at 8 a.m. in the morning. But, like many, I am a great admirer of Fr. Nicolás and felt a special desire to meet him because he spent some years in the Philippines, including the time just prior to his election."

Of her brief but memorable encounter with the superior general, Punsalan-Manlimos says, "I felt a warm welcome and genuine interest from him."

One of the other participants in the seminar in Chennai was a Filipino Jesuit, Father Albert Alejo, who knew Fr. Nicolás from his time in the Philippines. At breakfast, Father Alejo shared a story of a conversation he had with Father Nicolás before the latter was to leave for General Congregation 35 in 2008. Father Alejo jokingly told his brother Jesuit, "Don't say no." Sure enough, Father Nicolás was nominated and elected superior general.

As for the seminar itself, which drew participants from nine countries, Punsalan-Manlimos says, "It was a fascinating opportunity to hear papers about the various ways that religious diversity, along with ethnic identities, play out in the complex political realities of different nations in Asia and the broader global context."

The seminar was led by two Jesuits who visited SU two years ago: Vincent Sekhar, S.J., executive director of the Institute for Dialogue with Cultures and Religions, who delivered a lecture on campus in April 2014; and Michael Amaladoss, S.J., the institute's director and a renowned theologian, who accompanied Father Sekhar on his trip to Seattle and spoke to a group of SU students.

For more information on the seminar, visit IDCR.