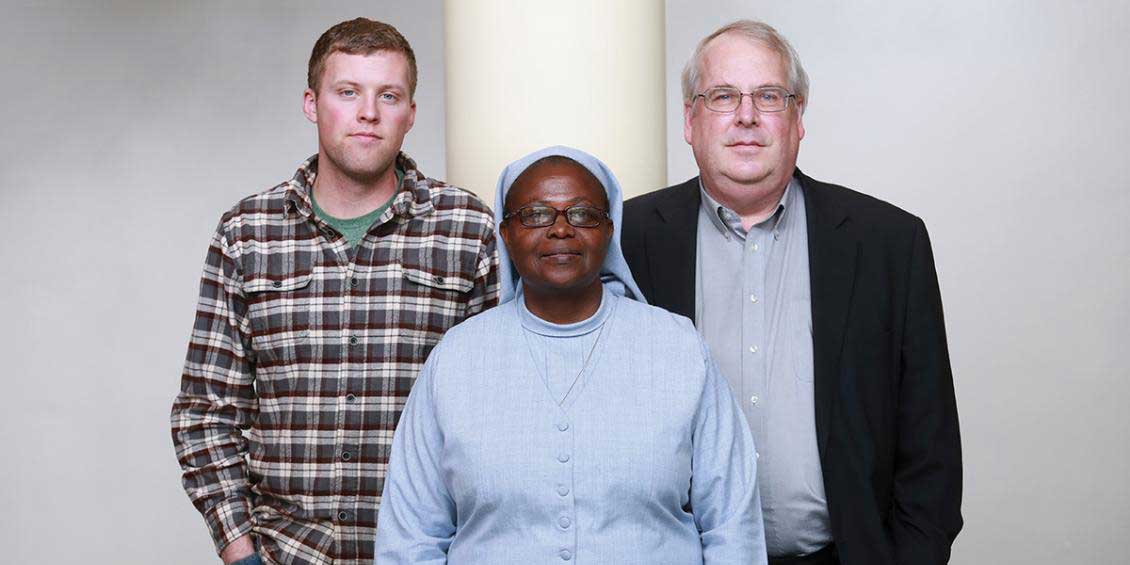 It began with a sheet of parchment paper pulled from the kitchen drawer of a Seattle University alumnus.

Sister Elizabeth Namazzi was staying with Jim Dooley, ’76, and his wife Nona at their Bothell, Wash., home in 2014. Originally from Uganda, Sister Namazzi was earning her PhD from the University of British Columbia at the time. The Dooleys had gotten to know her through her cousin, Father Aloysius Ssensamba, a priest who regularly visited their parish and currently serves in the Archdiocese of Seattle.

So there she was in the Jim and Nona’s kitchen one night, hand-scrawling something on a piece of paper. “I’d like to talk to you about my dream,” she told Jim.

She explained that in her country young women who become pregnant out of wedlock are ostracized by their families and communities. The women have nowhere to go, no one to take care of them and no way of improving their prospects.

Sr. Namazzi’s dream, she told her host, included creating a complex of three buildings—a clinic, a convent and an educational center. This would be a place for women to find shelter, medical care, education and counseling. And then came the question, “How are we going to do this?”

Laughing at the recollection, Jim Dooley says, “Notice that she used the inclusive word ‘we’ the way nuns always do.”

“At first, I didn’t give it much thought,” says Jim, whose “day job” regularly sends him traveling around the country, selling parts used in making lasers. “Like everyone else, I had a lot of other things going on.”

But Sr. Namazzi was persistent—very persistent—and the Dooleys felt compelled to help in some way.

The electrical engineering graduate’s thoughts would turn to his alma mater. He was familiar with the College of Science and Engineering’s Project Center, through which small teams of senior students work with industry and community partners on real-life projects. He reached out to Nirmala (“Nimmy”) Gnanapragasam, associate professor of civil and environmental engineering. She wrote back, “Come over for lunch.” The meeting would lead to a trio of SU students being deployed to help with the project.

And so it was that nearly 9,000 miles removed from the center’s intended site in Masaka, Uganda, the students—Andrew McAferty, Steven Millett and Trevor Coffman—embarked on a yearlong effort to bring Sr. Namazzi’s drawing and dream to life.

In June 2016, the students completed their work and submitted a comprehensive, 99-page design for the Self-Realization and Skills Development Center for Early Mothers. The students designed the three buildings using locally available materials and taking to account the structural demands required in a region that is stressed by high winds and earthquakes.

“What the team did means a lot for this project,” says Sr. Namazzi. “When I conceived the project, I did not know at all how to move it forward. I didn’t even know how I would have it designed. … It gives us a picture of what the project will look like structurally and it gives us somewhere to start from.”

“Literally invaluable” is how Jim Dooley refers to the students’ work, estimating that an architectural firm would charge upwards of $100,000 for a comparable design. One of the students, McAferty, says that working on the project was rewarding, professionally and personally. “The project was special to me because it was for a good cause…providing a safe place for women to give birth, seek counseling and community development.”

McAferty, now a field engineer working for a general contractor, is a member of the center’s board of directors. Of his continued engagement with the project, he says, “I would be crazy not to be, just seeing the passion Sr. Elizabeth has for it. It’s a total no-brainer for me.”

The project received a 2017 Engineering Education Award from NCEES, the National Council of Examiners for Engineering and Surveying. The award recognizes college- industry partnerships and student awareness of the fundamental principles of engineering—public health, safety and welfare.

“The students were really motivated by the context of the project,” says Canney, the faculty adviser. “They created a really solid idea for what the buildings will be.”

Once built, the center will have the capacity to house and serve as many as 32 women. Jim says he and Sr. Namazzi agree that “this can’t be an orphanage. No one is staying permanently.” The idea is to help the women get back on their feet, develop the skills they needed to succeed in life and ideally reunite them with their families and communities.

“When the center is completed, it will provide shelter for the (mothers and their children) who have nowhere to live,” says Sr. Namazzi. “ And … it will provide education for parenting, child nutrition, but above all skills to these girls for self-reliance.”

As for the status of the project, a few SU alumni stepped up with donations to help purchase the land.

Sr. Namazzi’s religious order, the Sisters of Mary, Mother of the Church, has committed the necessary staffing. All that’s needed now is the money—approximately $1.2 million—to construct the buildings.

“Everything else is lined up,” says Dooley.