How can I get a copy of the International Dinner 40th Annual Cookbook?

Anyone who’s ever attended SU’s International Dinner can attest to the quintessential quality of its cuisine. Each featured dish is made with recipes submitted by international students, providing a tantalizing tour for the taste buds.

This year’s International Dinner, held Jan. 28, marked its 40th anniversary, and to celebrate the milestone, the university’s international students decided to do something special—create a cookbook featuring recipes of more than 80 dishes that have been served at the dinner through the years.

GET YOURS! Copies are still available: $20 each, cash or check, at the front desk International Student Center (PAVL 160). 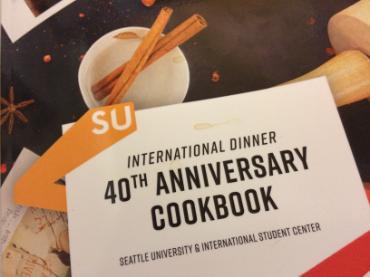 The idea for the cookbook began marinating when Marie Johnston (Student Development Administration, ’16), assistant director in the International Student Center (ISC), was working in the center as a graduate assistant. One day, she and other students on staff got to talking about “how amazing it would be to compile all of these fantastic recipes that come from the legacy of international student experiences and narratives.”

That vision became real when three student leaders—Melia Lawrence, Lynn Doan and Angel Yi-Ting Wang—teamed up during the fall quarter to recruit designers, photographers and cooks to make the publication happen.

The result is an impressive compendium of 86 culinary treats from around the world. “This (shows) how much talent, pride, and drive is within our international student community,” says Johnston. “We hope that you all enjoy the food as well as the 100 percent student-produced statements, narratives, testimonials and photography.”

A few highlights from the book…

This dish is considered a really popular comfort food which means the recipes for this dish varies from home to home, so you can add your own personal touches to this recipe. Within the ISC, this dish has been a staple for our Sophia University Japanese exchange students who prepare this dish for either our annual UN Luncheon or our International Dinner. Featured alongside this recipe, is a photo and reflection from Gyongsu Ha, who was an exchange student during the 2014-2015 academic year. During his time at Seattle University, he cooked this dish three times, and at the International Dinner, he marveled at the vast amount of potatoes he had to peel and insisted on a photo with them. Gyongsu’s reflection within our book talks about how his experience studying abroad helped him embrace his marginalized identity of being a Korean Citizen within Japan and has given him strength to celebrate his nationality and the legacy his ancestors have left.

Good for special occasions or even everyday breakfast, ful is a humble dish as old as time! Its high fiber content will also keep you full for a while- so consider this dish for an energy-packed meal. Paired with this dish is a reflection from Fadi Abouelsaad, a Jesuit from Egypt studying Transformational Leadership at the School of Theology and Ministry. He reflected on his experience as an international student Jesuit at Seattle University.

An easy and healthy appetizer from the coasts of Ecuador. This dish has been featured at our International Dinner, UN Luncheon, and also recently featured for a BBQ fundraiser for the 2016 earthquakes in Kumamoto, Japan and Ecuador. One of our current international students, Wendy Tafur, and our 2015-2016 Sophia University exchange students teamed up to host this earthquake relief event. Featured alongside this recipe, is Wendy herself who talks about the friendships she has made while studying here at Seattle University as well as her Fall 2016 quarter abroad in London.