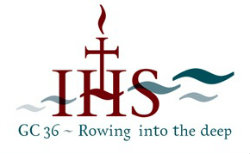 While many of us are myopically focused on the 2016 presidential race, there is another election of great importance taking place this fall. On Oct. 2, two hundred Jesuits from around the world will gather in Rome for General Congregation 36 (GC36) to elect a new leader.

GC36 was convoked by Jesuit Superior General Adolfo Nicolás, S.J., after he announced his intention to resign, having served in that role since 2008. His successor will be the 31st superior general in the 475-year history of the Society of Jesus. You can read more about GC36 here.

The delegates representing the Oregon Province--of which we are still a part before joining the California Province for a new Jesuits West Province in 2017--are Provincial Scott Santarosa, S.J., and Tom Lamanna, S.J., superior of the Jesuit Community at Bellarmine Preparatory School in Tacoma.

An interesting side note pointed out by Joe Orlando, director of the Center for Jesuit Education Resources: "One of the U.S. Jesuits helping to organize this congregation is Mark Ravizza, S.J., of the California Province. He is our spring lecturer here at SU for the Catholic Heritage Lecture Series."