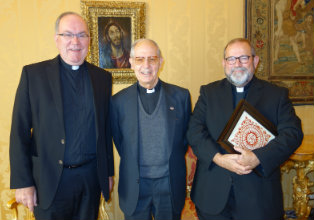 Adolfo Nicolás, S.J., superior general of the Society of Jesus, has convoked the 36th General Congregation. About 200 Jesuit delegates will be in Rome for the congregation, which is scheduled for October 2016.

The main impetus for the congregation is to elect a superior general to succeed Fr. Nicolás who has announced his resignation. (Fr. Nicolas is pictured here with SU President Stephen Sundborg, S.J., and Arrupe Jesuit Community Rector Tom Lucas, S.J., in November 2014 prior to meeting with Pope Francis.)

Delegates will also take up "matters of greater moment," as written in the Jesuit Constitutions.

At the end of the article, you'll find a list of interesting facts about previous congregations-such as why the first General Congregation was delayed, who the youngest Jesuit ever to be elected superior general was, which congregation elected two superior generals and, most important, how the delegates know where to sit.