Peter-Hans Kolvenbach, S.J., who served as superior general of the Society of Jesus from 1983 to 2008, died in Beirut, Lebanon, on Nov. 26, four days before his 88th birthday.

Born in Druten, Netherlands, Father Kolvenbach, entered the Society of Jesus in 1948. He served as a professor of linguistics and Armenian language and literature at St. Joseph’s University in Beirut before taking on a number of leadership roles within the society. In 1974 he was named vice-provincial of the Near East, which includes Egypt, Lebanon and Syria. In 1981 he was called to Rome as rector of the Pontifical Oriental Institute. He was elected the 29th superior general of the Jesuits in September 1983.

Pope Francis shared the following in a message to current Superior General Arturo Sosa, S.J.: “With memory of Fr. Kolvenbach’s total fidelity to Christ and his Gospel, together with his generous commitment to exercise his particular office for the good of the Church, I offer prayers of suffrage by invoking the Divine Mercy for the eternal rest of his soul.” 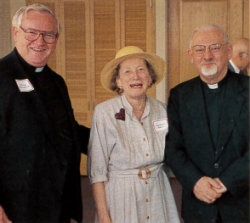 “Fr. Kolvenbach is best remembered by Seattle University for his articulation of the mission of Jesuit universities and for his encouragement that we form students in ‘a well-educated solidarity’ with others through contact as much as by concept,” said President Stephen Sundborg, S.J.

Father Kolvenbach visited Seattle University in 1993. A service-learning community established in his name is available to sophomores, juniors and seniors.

You can read more about Fr. Kolvenbach at jesuits.org and America magazine.