After serving in the Peace Corps, Jason Welle was pretty certain he was being called to the priesthood. What he wasn’t so sure of was what sort of priest he wanted to be.

For part of his vocational discernment process, Welle did what any reasonable person with a questioning mind—and computer—would do in the early 21st century: he took to the Internet. And the more research he did online, the clearer it became that he belonged with the Jesuits.

“I knew the Jesuits by reputation only, mainly for their commitment to social justice,” he says. “And I knew I wanted to do something that combined my interest in international development with a deep spirituality and service as a priest. I could see myself fulfilling both of those desires as a Jesuit.” 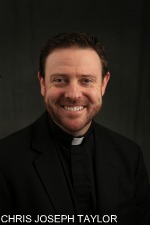 Welle entered the Jesuits in 2006. After completing his master’s in philosophy at Fordham University, he joined SU in August. He expects to be here for the next two or three years, for the period of a Jesuit’s formation that is known as regency. During this phase, Jesuits work in a variety of ministries before returning to school for theological studies.

At SU, Welle is serving as special projects coordinator in Global Engagement. He’s currently working on the office’s website to make it more engaging for SU students interested in studying abroad and prospective international students who might want to enroll here. He’s also researching some potential new exchange partnerships and doing some student advising in Education Abroad.

For Welle, entering the priesthood was not a completely out-of-leftfield decision. He attended a high school seminary, but left to enroll at UC-Santa Cruz. After earning a degree in community studies, which is a social justice-oriented major, Welle bounced around for a while, working as a travel agent and eventually a flight attendant. He loved the chance to travel and see the world, but after a while, it got old. Welle decided to engage the world in a deeper way. He took a leave of absence from the airline and joined the Peace Corps.

Placed in Malawi, Welle did field work as a community health volunteer. “The Peace Corps is really where I discovered my vocation to enter the Society,” he says. “Getting out of the U.S. fish bowl, gave me a new perspective on the world and America’s place in it.”

Welle was in Malawi for 9/11, an experience that he says completely reshaped his view of the world. “I was living in a country where 3,000 people died every week from HIV and AIDS—that’s about what the death toll was in the towers. People there were living at a level of poverty that we just don’t know in the same way here in the U.S. They had hardly even seen a two- or three-story building, much less a 150-story tower. It was just beyond their worldview. 9/11 just sort of awakened me out of a slumber or a complacency about America’s role and my own place in the world.”

The event was transformative for Welle in other important ways, too. “There’s a lot of downtime in Peace Corps, especially in Malawi, where there’s 12 hours of night, without a television and not much radio. I became very introspective. I think, without realizing it, I was praying, really yearning to understand who I was.”

A Jesuit usually applies to either the province where he’s living at the time or the province where he’s from. When Welle applied, he was living in Washington, D.C., but didn’t feel a strong connection to the area. “I’m from California, so it would’ve been natural for me to join that province, but since I was looking on the Internet and didn’t really understand the provincial system, I was reading about the Oregon Province and its historic relationship with the Province of Zambia-Malawi. So that connection is what first drew me in this direction.”

For Welle, his enjoyment of hiking and interest in skiing (which he plans to take up this winter) are added benefits to living in the Northwest. He’s just as well-suited to SU, saying that the care the university gives to individual students was readily apparent from the conversations he had with faculty and staff during his interview. “You don’t find that in a lot of universities, and even at a lot of Jesuit universities, it’s not as strong (a commitment) as it is here.”

SU’s eco-friendly ethic is also not lost on Welle. “Especially from my time in the Peace Corps, I developed a really strong awareness of sustainability issues, and I’m really impressed with the way Seattle U has made that a priority and incorporated so many things into its basic operations.”