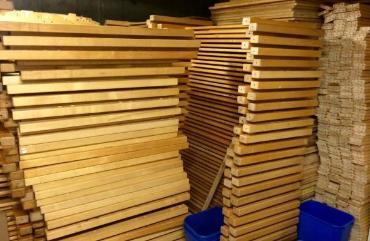 Sleep is coming more easily to hundreds of people in Seattle and around the world thanks to Seattle University’s recent donation of bunk beds to local non-profits.

The Recycling Department joined forces with Campion Hall’s custodial staff to donate 200 beds to Union Gospel Mission and the NW Furniture Bank this past fall. Several of the beds were given to families displaced from their homes in a West Seattle apartment fire in September. Additionally, a local charity is working with the Recycling Department and NW Furniture Bank to ship about 80 of the donated beds to Ghana through a separate donation service.

Spearheading the donation was Eric Elliott, recycling coordinator, with the help of interns Joseph Harris and Erin Savoy. Elliott says, “The donated beds are avoiding a long train ride to the landfill and are getting a second life with people around the world who need them—all part of Seattle University’s ongoing steps toward waste minimization, and the university’s commitment to helping communities in need, wherever they are.”

The donated bed frames were from wooden bunk beds that had been used in the Campion residence hall for years until the university moved to replace them with new, metal, tool-less beds. The donation was part of a three-year replacement process.

“As Seattle University continues to upgrade its housing and academic facilities, there will be plenty of donations like this one to come,” adds Elliott.