When I asked if he'd like to catch a quick coffee near campus on one of those last sunny days of summer, Father Josef Venker, S.J., had a better idea.

"Let's head over to Arrupe House and I'll make you one," he suggested and off we went.

In no time, he had assembled numerous powders and a couple of familiar liquids on the Arrupe kitchen counter. Fr. Venker towered over a blender and began to work his magic.

"I can't afford very many expensive coffee drinks, so for the past couple of summers I've been making my own," said the chairman of the Fine Arts Department who came to Seattle University in 1994. A native of St. Louis, this year Fr. Venker celebrates the 25th anniversary of his ordination as a member of the Missouri Province.

Over the racket of an ice-crunching blender, he bellowed, "Each batch is a little different. It all depends on how much ice and what optional ingredients I add."

He removed the top of the blender and pointed inside. 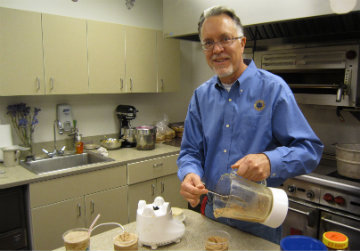 "You need to have a vortex there in the center," Fr. Venker warned. "Otherwise it won't break up the ice."

He's on a quest to determine what makes commercial cold coffee drinks especially creamy and smooth.

"I still haven't figured out what their secret ingredient is. I'm guessing it's something that comes from the factory. Maltodextrin, maybe?"

Replicating those secret ingredients is a culinary challenge he enjoys and it extends beyond coffee drinks. When Fr. Venker spends a weekend at the Jesuit retreat house on Beaver Lake, he'll attempt to unmask memorable dishes he may have sampled at Seattle restaurants. He discovered, for example, that adding ¼ cup powdered milk to pizza dough makes it a tad softer.

He said his creative life as an artist often inspires his gastronomic interests, including cooking without recipes. At summer's end, he had to figure out how to make use of 10 pounds of fresh clams on the Washington coast. It seemed like a lot of clams at first, yet he was able to turn the bivalves into three different dishes over Labor Day weekend.

"It comes from living in a community with 24 people. You learn to do things big," he said with a shrug.

When he creates those summer-only coffee drinks, he always makes two of the iced caffeine-rich concoctions at a time.  And this past summer, he gave them a name.

"Since these are cost effective and fun, I call them 'Icy Cheap-o-cinos,'" he said with a laugh.

Add instant coffee, cocoa from packets and strong coffee to a blender and blend well. Turn off blender, add half-and-half or milk and ice. Blend again. You want to be able to see a vortex in the center so you know the ice is breaking up. Add other optional ingredients to taste, if desired. Makes two large Cheap-o-cinos.