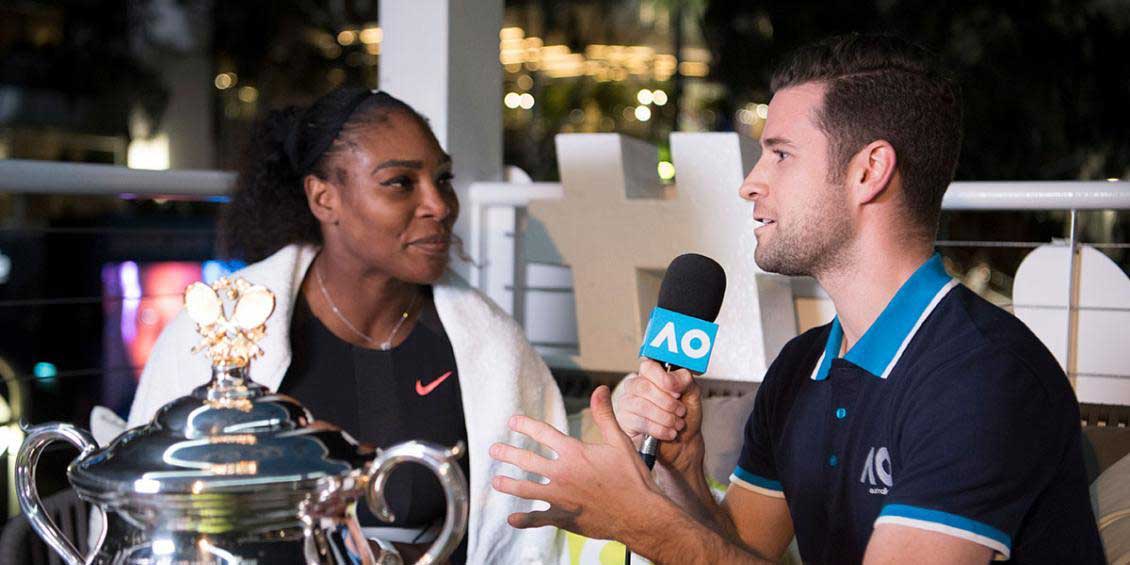 Sports journalist Nick McCarvel, '08, is making a name for himself in the tennis world.

The sun has set on the finals of the Australian Open, but Nick McCarvel, ’08, keeps the action going for tennis fans around the world from a raised platform outside center court. With cameras rolling and fans at street level below, McCarvel introduces Serena Williams, who has won the tournament for her seventh time—and her 23rd Grand Slam title, a modern record. As McCarvel asks Williams about her “chase for history,” he artfully engages his live and internet audiences in the conversation.

Since his days studying journalism at Seattle U, McCarvel has built an enviable sports reporting career. Having written for USA Today, ESPN, NBC Olympics and The Daily Beast, McCarvel spends more time these days in front of a camera engaged in multimedia work that has him conducting live interviews, hosting video chats and emceeing sporting events.

At the Australian Open in January, McCarvel hosted the Twitter Blue Room, a talk-show format in which players joined him on a couch for a casual conversation. McCarvel seems to have hit his stride as an on-camera personality. He will tell you, however, that despite his apparent composure, there are times when he is operating outside his comfort zone.

“I’m still nervous today when I try to do bigger things,” he says. He recalls battling a case of nerves when he interviewed Roger Federer. But when the camera light came on, McCarvel says, “I either had to be sure of myself or I had to fake it.”

McCarvel’s career dreams began taking shape as a child in a “sports family” of six children in Helena, Mont. A competitive tennis player himself, he read the newspaper daily, paying close attention to the sports pages. From the time he was a teenager, he knew he wanted to be a sports reporter.

During his junior year at SU, he set the wheels in motion. While on Thanksgiving break in New York City, he showed up at the offices of Tennis magazine without an appointment and talked his way into a summer internship. The bold move cemented a philosophy that guides him to this day: “You can’t be afraid of being told ‘no.’”

After graduation, McCarvel moved to New York City and established himself as a freelance reporter while supporting himself through nonprofit work. In May 2009, he wrote a blog post about former Wimbledon champion Steffi Graf for The New York Times—his first major byline. That moment remains a highlight of his career.

McCarvel is grateful to Seattle U and particularly his journalism professors, Dr. Sonora Jha and Gary Atkins, who demanded high quality, ethical work. And, with a job that keeps him traveling the globe five months a year, he has benefited from an education that shaped his worldview.

“I got the foundation to get me where I am today at Seattle U,” McCarvel says.