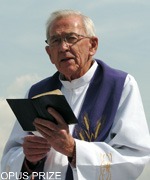 The 2010 Opus Prize was awarded to two co-recipients last month, and one of them was a Jesuit, John Halligan, S.J. (left). Founder of an organization called Working Boys’ Center, Father Halligan serves the poorest of the poor in Quito Ecuador. Halligan is the second Jesuit to receive the Opus Prize. Trevor Miranda, S.J., who started Reach Education Action Programme (REAP) to help educate poor children in India, was the 2005 recipient. Joining Halligan in receiving the 2010 prize was Sister Beatrice Chipeta, a Roman Catholic nun who works with orphans in Malawi.

The Opus Prize has been awarded to unsung, faith-based humanitarians since 2004, each time at a Catholic college or university. Recipients are awarded $1 million to support the work of their organizations. They are selected after a very elaborate process involving spotters and jurors. SU hosted the Opus Prize in 2008.